Since 1972 The Irma Simonton Black and James H. Black Award for Excellence in Children's Literature has been hosted by the Bank Street College of Education.  Recently School Library Journal joined with the Bank Street College of Education to promote this award bringing the ability to vote to more children.  Yes, the winner of this award is selected solely by children.

Picture books combining text and illustrations which are inseparable are chosen by third and fourth grade students at the school leaving the final voting to first and second grade students.  One of the four finalists for 2012 is What Animals Really Like:  A New Song Composed and Conducted by Mr. Herbert Timberteeth (Abrams Books for Young Readers), lyrics and pictures by Fiona Robinson. 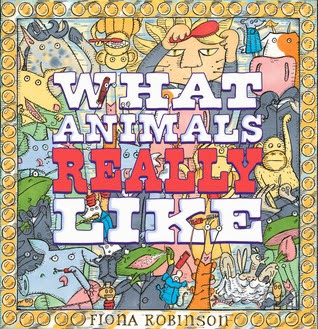 Ladies and gentlemen! Boys and girls!
Here, for the first time, I present my new song,
"What Animals Like Most."
A-one, a-two, a-one, two, three, and...

The first three groups, looking slightly woebegone, sing their lyrics, every other one rhyming with the previous group's last word. The fourth group, strangely enough is smiling.  Why are they smiling?  The cows have decided that they are going to say dig instead of moo.

"Dig?" says composer/conductor Timberteeth.  Dig, as we readers well know, does not rhyme with the pigeon's coo.  What's a conductor to do?

The presentation continues as the next three set of animals voice their lines perfectly, looking worried, until again the warthogs, grinning widely, ad lib.  The angry buck-toothed director stops the performance, a button popping off his coat.  Baton raised he strives for order but the creatures are in full revolt now.

Frazzled by this turn of events he is ready to quit. Quitting is not what the animals want.  Looking straight into the audience he asks:

Are you sure you want to hear what the animals really like?

What they like does not rhyme.  What they like is anything but ordinary; flower arranging lions, ballet dancing pigeons, skiing shrimp and other oddities span the next seven pages until another twist squeaks in.   Several other adornments falling off Mr. Herbert Timberteeth's tux precedes his final meltdown.

His attempt to close the curtains in disgust provides readers with another four-page fold.  This array of text and pictures leaves no doubt that individuality rules.  There is no place for pigeonholing in this performance, not even for Mr. Herbert Timberteeth, it would seem.

Using pen and ink and marker pens Fiona Robinson depicts the story's events, the character's unique pastimes, and a full range of emotion on heavy cream-colored paper bright with color and animation.  Humor resonates throughout in the obvious and in the tiniest of details; two overalls wearing squirrels are pasting up the title page billboard-style while a sunglasses wearing third lounges in a lawn chair, one of the skiing shrimp is wearing casts on three of her feet, rabbits from the magic show wolves are rampant and multiplying.  Each reading brings new particulars to light, even the front cover.

Get ready to laugh loud and long from cover to cover as Fiona Robinson writes and illustrates What Animals Really Like.  Not only is this title pure fun to read, it lends itself to further discovery; having readers ponder other animals and what they may like or not like that breaks the mold. Divide a group into smaller groups; one providing the activities, the other the animals.  There's nothing better than the combination of learning and laughter.
Posted by Xena's Mom at 5:46 AM