Sweet Nothings That Mean Everything

When watching those that are near and dear, time shared together day in and day out, some facial expression, an action or reaction might trigger something other than their name to spring forth from our lips.  Or perhaps a nickname has been passed down through generations.  Whatever the reason, those words provide confirmation to the recipient of affection on the part of the speaker.  Little Treasures:  Endearments from Around the World (Houghton Mifflin Books for Children) by Jacqueline K. Ogburn, pictures by Chris Raschka, crosses a spectrum of languages and countries bringing those phrases of love to readers. 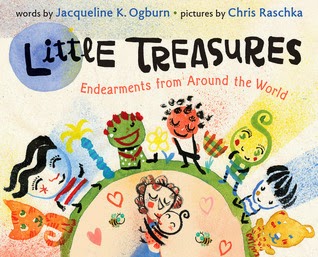 All over the world, mothers and fathers, grandparents and cousins, brothers and sisters, uncles and aunts, love their children very much and call them by many different sweet names.

Turning and scanning the pages readers are treated to seventeen different sets of expressions arranged either by language or country.  Beginning with English-speaking families, America, England and Wales, we read baby-cakes, poppet and flossie.  For each of the groupings translations from the country/language of origin are given in English along with the pronunciation in parentheses.  Around our globe animals, ducky, possum, my flea, little mouse, or my chick, food, lambchop, my little cabbage, or dumpling or a more abstract thought such as happiness have found their way into the spoken words of those who love their children.

Primary colors splash across beige pages replete with the distinguishing artwork of Chris Raschka.  Orange endpapers promise a warmth that literally glows on each and every spread depicting truly huggable children and their families from the four corners of our planet.  Woven into, what can only be described as a portrayal of sheer happiness, are small creatures mentioned in the text as endearments, little mice, various bugs, and several versions of the sun.

Generally the families are spread along the top of a two page spread, illustrations done in ink watercolor, and gouache, as the individual children are peppered beneath, text above and below them.  Laughter, shyness, wide-eyed wonder, or sleep are fully expressed by the children as they stand, run, crawl, lean or sit.  Raschka's children are the vivid visualization of each little treasure.

At the close of the book Ogburn acknowledges a host of friends and friends of friends that contributed to the quality of this title.  Her About the Book addresses the road she followed, the research involved, in selecting those endearments found within this book.

Readers, young and old alike, will find much to enjoy in Little Treasures:  Endearments from Around the World words by Jacqueline K. Ogburn, pictures by Chris Raschka, as they roll the pronunciations around on their tongues and store the words of love within their minds and hearts.  I know this is going to be a favorite with the children in my world.