Across The Generations, A Story To Tell

When climbing through their family tree most of those living in America find their roots are firmly cemented in a country other than the United States; we are immigrants one and all.  Individuals and families left their native countries, all that was familiar, to seek a new life.  A representative title paying homage to one such family is on the final four list of the 2012 Irma Simonton Black and James H. Black Award for Excellence in Children's Literature;  All The Way To America:  The Story of a Big Italian Family and a Little Shovel (Alfred A. Knopf) written and illustrated by Dan Yaccarino.

Michele Iaccarino left his poor farming family in Sorrento, Italy to come to America seeking new possibilities for his future.  As he boarded a boat he carried these words and items from his parents. 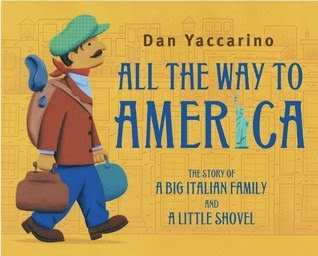 "Work hard," his father told him, handing him the little shovel.  "But remember to enjoy life."
"And never forget your family," his mother said.  She hugged him and gave him their few family photographs and her recipe for tomato sauce.

Ellis Island, New York City, gave him a new name, Michael Yaccarino.  Initially finding work with friends from home Michael used that shovel to scoop flour and sugar in a bakery.  Within time Michael had his own business serving up dried fruit and nuts to his customers with the little shovel.

Of the five children he and his wife Adeline had, the oldest son, Aniello, helped his father, from the age of twelve, to support the family.  Growing up Aniello, called Dan, married Helen and together they ran their own market measuring out beans, macaroni and olives with the little shovel.  The two were able to realize their dream of living in a country home hosting many a family gathering.

After school Dan's son Mike helped out in the kitchen of the restaurant Dan opened using his grandmother's tomato sauce on many of the speciality dishes.  Growing in numbers the family now celebrated in the expanse of the restaurant.  Mike grew up to marry Elaine, Dan Yaccarino's parents.

Outside his barber shop, Mike used the shovel to spread rock salt on the snowy sidewalks.  Though he grew up in a large home near his grandparents, helping his father with his tomato plants, when the opportunity presented itself, Dan moved back to New York City where his great-grandfather Michael had begun his new life.  Today Dan, his wife Sue and two children, Michael and Lucy, continue the family values of working hard, enjoying life and loving their family.  And the little shovel....it's used to tend the zucchini, tomatoes and strawberries in their terrace garden.

The conversational language and tone conveyed by word choice in this narrative is identical to what one might overhear between a parent and child; conveying the story of a family history built on work, play and love.  That commonality of beliefs passed on from generation to generation is strengthened by the little shovel given from father to son again and again.

The little shovel also becomes a vehicle for the telling of these four family stories much as the story wreath of old used by the African storytellers.  From these wreaths were hung a variety of objects, each representative of a particular tale in the teller's repertoire.

Illustrations in this title were rendered using gouache on Arches watercolor paper; bright, warm colors enhancing the unity within each family and between each generation.    Yaccarino's great grandfather is walking across the cover, buildings of New York City in the background.  Front endpapers depict a map showing the route across the Atlantic from Sorrento to New York.  Family portraits of the four generations appear on the back endpapers.

From the title pages depicting young Michele little shovel in hand as he strolls through a row of vines holding ripened tomatoes, all pictures complimenting the text within this story are shown in two page spreads blending the lines of time, deepening the sense of flow.  Some of the spreads highlight a family at work, some show them at play, but all the illustrations display the love.  So realistic are the portrayal of the characters' lives you can almost hear the noise at the seaport, the clatter of hooves on a city street, the chatter among customers, the laughter between family members, the clash of dishes and always the sound of the little shovel digging, measuring, serving each father and each son.

All The Way To America:  The Story of a Big Italian Family and a Little Shovel by Dan Yaccarino is thirty-two pages filled with heart simply told with grand effect.

I can see asking readers what object in their family history has special meaning; what story or stories surround that object.  Or does their father or mother have a phrase or thought frequently expressed in guidance; a family value.