What?! There's Another One!?

Younger siblings can be irritating at the very least; downright inconvenient when you've had the undivided attention of your parents for years.  What you believe to be the status quo shifts with their appearance on the scene; family dynamics are no longer predictable.  In his title, Another Brother, (Feiwel and Friends) author/illustrator Matthew Cordell presents his ridiculous, unconventional take on the whole ordeal. 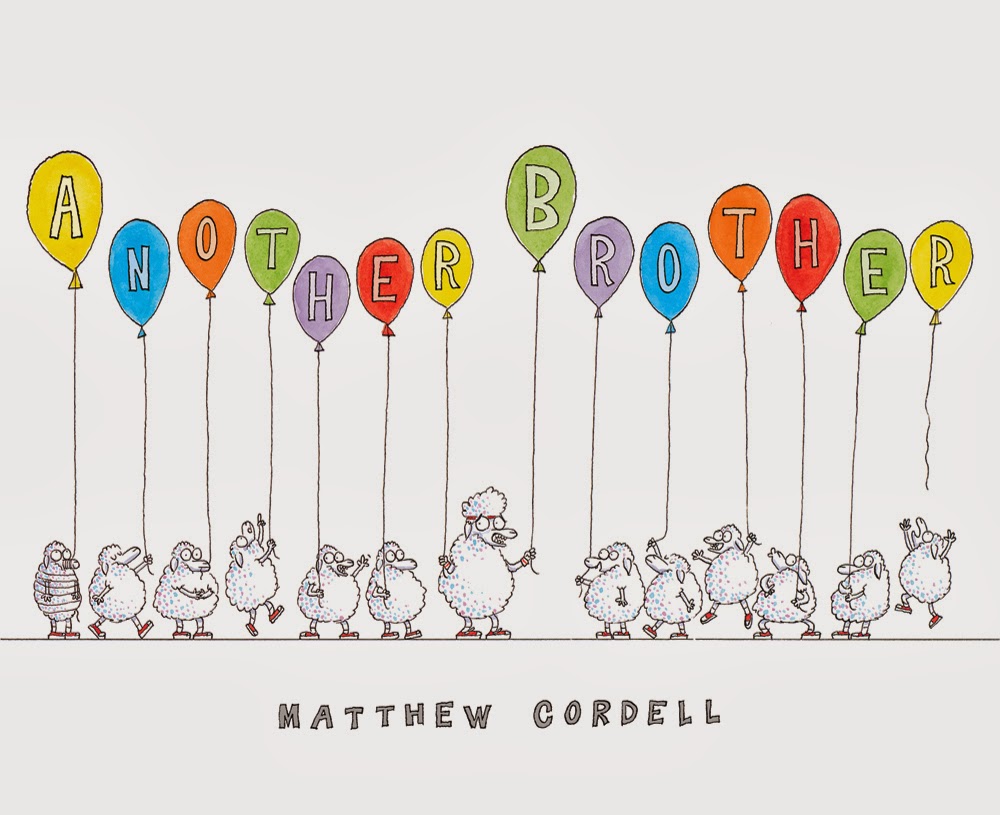 Davy, a sheep, is his parent's precious little lamb; bringing a tear to his father's eye with his ballad singing, applause from his mother for his knitting efforts, and joy to both with his unparalleled skills in using hair clippers.  Petey, a new brother, doesn't react to Davy's abilities as do his parents.  Oh, no, not at all.  Before Davy adjusts to these shocking new developments they are multiplied by the addition of another eleven brothers.  Yes, twelve new brothers in all!

To make matters worse whatever Davy does, wherever he goes, and whatever he says they mimic; eating Toot Loops, walking like a monkey or burping.  Complaining to his parents meets with the typical "It's only a phase."  Ready to pull his "wool" out, Davy discovers a difference one morning.

Deviating from what has become typical is exhilarating, joyous and... so very singular.  Davy finds that he has adjusted to all those pesty beings in his space; without them he feels lost.  A new day brings an unexpected surprise to Davy and readers; the very best kind of surprise.

Matthew Cordell providing a narrative overflowing with absurd humor has readers firmly "stuffed in his back pocket" by the fourth page.  How many human boys excel at ballad singing, the knitting of socks or creating their own hairdos, let alone a sheep?  When Davy gets his first new brother Petey, his crying, upset stomach and "gas" problems add to Davy's reluctance toward acceptance.  It's the addition of eleven more brothers mirroring his every action, pushing Davy to the edge, that will give readers mass attacks of the giggles; maybe even a guffaw or two.

Using pen and ink with watercolor, Cordell, brings new definition to the visual representation of sheep. His book jacket front shows a frazzled Davy, head band in place around his signature "big head of hair", with his twelve siblings holding balloons spelling out the title; close inspection shows the individual antics of each.  On the back of the jacket are Mom and Dad; she floating in the air holding a balloon bouquet clothed in a skintight sweater on top with her bottom half fluffing out, he holding one gigantic multi-striped balloon, legs covered in too-tight trousers with red suspenders stretching over his rather large puffy chest.  The front book cover illustrates Davy crooning one of his ballads strumming a guitar, the melody rising in a swirl, his brothers on the back each playing a different instrument as colorful musical notes cover the page.

Warm golden endpapers with Davy pedaling frantically, lines of brothers in pursuit, are on the front and back; a shift in direction and in expression on the back endpapers.  Lots of creamy white surrounds the expressive sheep family as spots of bright bold primary colors, shades changing, accentuate. Cordell clearly breaks the mold if a point is to be made, illustrating all the new brothers in a spiral across a single page or the group of eights frames illustrating the impish imitators.

What really grabs the readers' attention is the detail; the breakfast table in the morning with each of the brothers doing everything but what they should be as Dad calmly sips his coffee and Mom looks on, eating her cereal or all the gang doing the monkey walk as Dad zooms by on his tractor, Mom scratching her head a red balloon disappearing in the distance.  As Davy crosses the monkey bars, the sheep train behind, each face reflects a varied look. Careful readers with see the single balloon floating in the night sky highlighted by the moon as Davy sleeps alone.

Matthew Cordell delivers quirky delight on every page of Another Brother never missing a single bleat in the crazy cadence created by his text and pictures. Illustrations luring readers to multiple viewings place this title on my Mock Caldecott for 2013.

The book trailer is a winner in and of itself.


Do yourself  a favor and read these two good interviews with Matthew Cordell; one at Kirkus Reviews and the other at Seven Impossible Things Before Breakfast.
Posted by Xena's Mom at 1:38 AM