He's back.  And he...is...definitely...good.  Chris Van Allsburg began writing and illustrating children's books in 1979 with The Garden of Abdul Gasazi which won a Caldecott Honor Medal.  It was followed by Jumanji in 1981 which won the 1982 Caldecott Medal.  In 1986 he was again the recipient of the Caldecott Medal for The Polar Express.  In the other thirteen titles between and following these honors Van Allsburg's books have beckoned and challenged readers to expand their perception of reality by journeying into his own special realm of fantasy.  His view of the impossible is so well conceived that by each stories' end readers are willing believers. 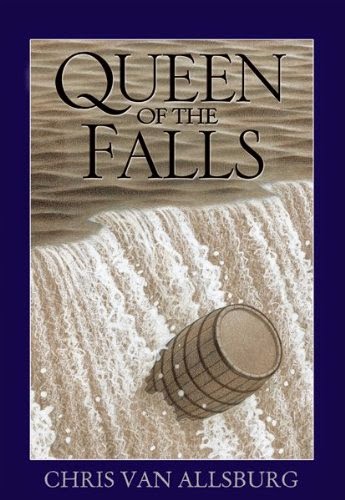 Six years have passed since Probuditi's publication.  For the first time ever Chris Van Allsburg has given readers a nonfiction tale in Queen of the Falls.  Through careful research the spectacular plunge in 1901 near the end of Annie Edson Taylor's life is recorded.


Mrs. Taylor, a sixty-two-year-old widow, running a charm school in Bay City, Michigan knows that drastic measures are in order.  The doors to her school are closing and unless she wishes to spend her remaining days in the poor house, she needs money and needs it fast.  From the moment the idea to go over Niagara Falls in a wooden barrel enters her mind until its fruition readers are held captivated by her audacity, determination and perseverance; from reluctant craftsman, to shady promoters, to unbelieving reporters and the final gathering of curious spectators.

Mr. Van Allsburg's pacing is superb leading in with the day of the event, then backtracking to the beginning bringing readers full circle to the barrel careening down the river, pausing and then dropping over the falls.  Never one to leave unanswered questions we follow Annie as she seeks her due claim to celebrity status.  Though fame and fortune allude her, despite her being the first to do this, Chris Van Allsburg closes with remarks that she made to a reporter ten years following her daring feat.

Using a variety of graphic techniques, full page spreads bleeding into the borders, center insets and altered- size, framed illustrations, viewers are treated to classic Van Allsburg sepia tone drawings that closely mirror the text but extend into the true nature of the depicted characters.

For those of us who have stood on the banks of these mighty falls and marveled at this awesome display of nature, how much more dramatic is the visual of someone going over in a wooden barrel and living to tell about it.  The courage of this Annie Edson Taylor, as presented by Chris Van Allsburg, to try and succeed is equally as marvelous.