As February crosses the halfway point each year the walls of Charlevoix Elementry School Library Media Center expand across the miles to the state of Alaska, the site of The Last Great Race on Earth, The Iditarod.  Mrs. Culver and her students immerse themselves in books, reading and research about this one of a kind dog sled race which has started on the first Saturday in March since 1973.  (Middle school students who have been a part of this educational adventure still inquire about the race each year.)  It is an unparalleled event where mushers and their dogs become heroic partners pitted against the majestic wilderness of this state and the unpredictable fury of Mother Nature. 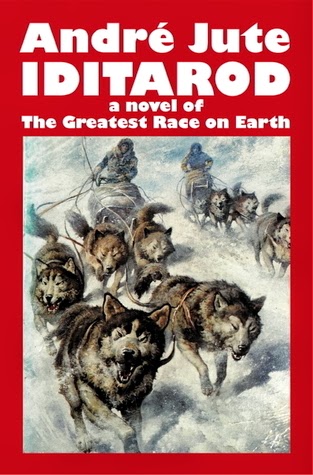 The most compelling nonfiction reads like fiction where reality is revealed with such insightful knowledge that the reader revels in the events spread before them scarcely believing that this could be true.  This is also true  with the finest fiction that reads like nonfiction; in that painstaking research discloses the writer's astute knowledge of the setting and events to such a point that readers willingly  follow the characters' dialogue, decisions, and actions believing that without a doubt this is true and they are living in the moment as the pages turn.  That is the stuff of Andre Jute's Iditarod.

On a collision course from the beginning Rhodes Delaney and James Alderston Whitbury III come from backgrounds as different as night and day.  Nothing either says can deter the other from seeing them in a light prejudiced by their initial meeting.  A challenge has been made and the two are rookies in the Iditarod racing not only against the other mushers but against each another in a separate race altogether, one with experience that money can't buy and the other with the money to buy whatever is needed.  Lines are drawn and the stakes are high--ten thousand dollars.  Unbeknownst to Rhodes and James the ante has been upped in the formation of a wolf pack numbering over fifty strong.

As the race commences the meticulous groundwork laid out by Jute in the earlier chapters begins to accelerate in alternating episodes following first the one than the other of these two mushers with their courageous dogs crossing the vast expanse of Alaska.  Not yet near but lurking in the background are the wolves whose voice is given separate chapters adding to the growing tension; for readers know that Jute would not have placed them so unless the three groups are destined to meet.

Anxiously we survive with Rhodes and James the attack of a bull moose, a mother bear long denied food, and an explosion on a river.  We are their shadows on those sleds as they engage in the timeless conflict of man and woman against the every changing elements of bone-chilling temperatures, frost-biting winds and white-out blizzards while traveling over treacherous terrain cloaked in darkness and snow.

While expected the final conflict is utterly frightening and fascinating at the same time; frightening in its gruesome reality but fascinating in the instinctive nature to survive at all costs.
The wolves picked up pace to close faster on the two dog teams and their mushers.  They were now less than twenty-five paces away.  On one side Siberia, on the other wolves..."Haw, haw, haw!" Rhodes shouted to turn her team, left away from the wolves, towards Siberia.  "Haw, Haw!" she heard James shout over the hullabaloo of terrified dogs.  But dog teams need space to turn, while a wolf pack wheels in the length of each individual free-running wolf.  Oh, my God, I've cut it too fine for James to turn as well.
Even then, in that hazardous split second, James had to admire the wolves' superb nerve and supreme timing.
And Rhodes, another superior athlete, felt an overwhelming sadness that now she would never finish the contest, would never reach Nome.  But I will!
It struck her that this had been a race not against James but against Alaska, represented by its wolves.

Not too far along in my reading I found myself turning the corners of pages down in this book. (Which as my students will tell you is a huge no-no but I couldn't help myself.) The vivid scenes spread before me by Jute's choice of language were intoxicating; some in their vastness, others in their intimate detail.
He had joked to the vet at Puntilla Lake about nightmares but this was the true black velvet from which they were cut....He had planned to camp at the top of the mountain and commence the descent at dawn, well rested, alert, able to see the dangers of the trail.  Too late.  He was into the ice chute in the dark, his dogs out of control.  Pitch black. Straight. Left. From above, green and yellow lights reached out for him but to no avail.  He had gone to the dogs, was lost to men, to reason, even to fear, not a man but a speeding demon hurrying on an unknown errand behind the hounds of hell.

The ptarmigan decided he and his dogs were not a threat and settled like down from a tearing pillow fight.

Another noteworthy skill of Jute's is to blend his extensive knowledge into the narrative without it being a distraction or burden.
And, she thought, if Toots ever answers me, I shall stop mushing.
"You know," she told Toots, tempting fate, "the old timers had the right idea.  Before your time, before my time, the musher didn't run behind his sled or ride the runners.  He rode on skis in front of the sled, behind the wheel dogs.  He was tied into the gangline and steered the sled with a pole tied to the righthand side of the sled.  Called the gee pole.  Obviously. But the lighter racing sleds could be steered from the back and went a whack faster without the gee pole, so they did away with it.  Except they didn't foresee situations like this, did they?"

Andre Jute's Iditarod is the finest piece of fiction that I have read to date about The Last Great Race on Earth.  Packed with adventure at every turn, nail-biting suspense, touches of endearing humor and the fine, subtle thread of romance this tale speaks to what readers crave.  Although written for an adult audience I recommend this for grades 7 and up. 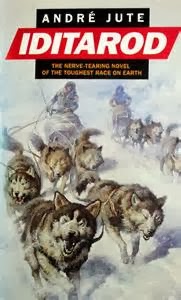 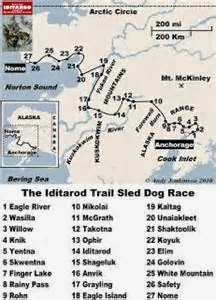 Originally published in 1990 Jute has a new anniversary eBook version on Kindle.  The cover still portrays artwork by Gino d'Achille.  A map of the race is included in this edition.  In May a new hardcover edition as well as a full range of electronic editions will be available via CoolMain Press which can be linked to above by clicking on Andre Jute's name.  The map will also appear in all of the new editions.