On The Road Again With Ike 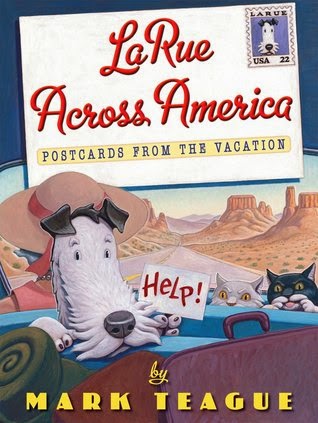 Few books capture the age old disdain that dogs have for cats (and cats for dogs) better than those penned and pictured by Mark Teague.  Ike LaRue first made an appearance in Dear Mrs. LaRue: Letters from Obedience School.  On its heels was Detective LaRue:  Letters from the Investigation followed by our canine hero running for office in Letters from the Campaign Trail:  LaRue for Mayor.   This spring the newest episode, LaRue Across America: Postcards from the Vacation, leaves little doubt in readers' minds that no dog gives his own special slant to a story quite like Ike.

The "tail" begins with headlines in The Snort City Register/Gazette proclaiming that due to the heat wave Leona Hibbins has been hospitalized leaving her cats without care.  Her neighbor Gertrude LaRue steps foward to take the frazzled felines with her and Ike on a road trip across the United States.  It seems that the cruise line does not allow cats on board thus the change in plans much to the chagrin of Ike.

What ensues is a series of postcards from Ike to Mrs. Hibbins describing in great detail all the reasons that her cats would be far better off anywhere than with Ike and Mrs. LaRue:  You know that she has never been a skillful driver.  What if the car breaks down in some hideous wasteland?...We have departed, and things do not look hopeful.  It seems that the same awful heat which caused your own collapse has left your cats ill-tempered and unmanageable...I know that the cats would like to turn back, too, but they are so contrary they refuse to take my side.  Only you can end this fiasco!

As in the previous books what Ike writes or views in his mind does not coincide with what is truly happening in the story.  And that is exactly what makes these tales so laugh-out-loud funny.  By using two page spreads, Teague's  illustrations show Ike's view in black and white and actual events in color increasing readers' hilarity at the disparity between the two.  His attention to detail especially the expressions on the dog and cats steps up the laughter a notch or two.

As I have said before nothing makes a book more alluring than endpapers which begin the story.  In this case viewers are treated to a full color map of the U.S.A. with Ike's trip mapped out highlighting those special points of interest along the way.  The book's jacket does not mirror the book's front and back cover just adding to the overall attraction.  Mark Teague has another winner in this "paws-itively" perfect package.