After ten years of writing for advertising Bob Raczka's first son was born.  This reintroduced him to the world of children's books.  Loving the creativity that this venue offered him, he was able to publish his first book five years later.  Most of his books deal with art perhaps because of his love of drawing which began as a boy. But I truly believe that there is a poet sharing a part of his heart with his love of art. Then again, is not one the other? 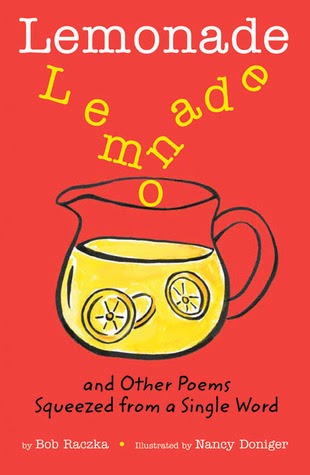 In an earlier post, December 27, 2010, I reviewed his outstanding book, Guyku: A Year of Haiku for Boys (HMH Books for Young Readers, October 28, 2010.  This spring he further extends his gift of writing poetry with Lemonade and other Poems Squeezed from a Single Word (Roaring Brook Press, March 15, 2011).  Twenty-two puzzling poems with a punch can be found within the pages of this slim volume.

What Raczka has done, using only the letters in the title of each poem, is to string combinations of those letters down the page which refer back to or describe a scene relative to that word.  So his readers can measure their creativity to his, on the following page he puts the letters in order revealing those words he combined to complete his thought.  What we have is pure poetic pleasure!


No matter how much fun Rob Raczka had piecing these together, readers will have just as much or more.  And without a doubt pen and paper in hand they will begin to compose their own.  The simple, light, red, black and gray graphics of  Nancy Doniger distinctly compliment each poem hinting at the final solution while never detracting from the readers' quest. 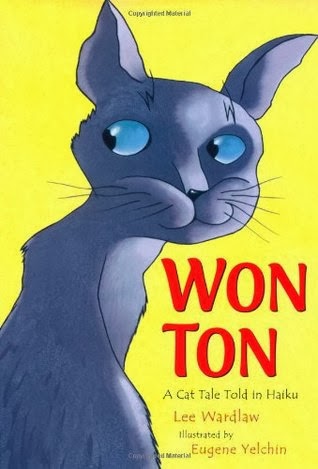 Not wanting to seem partial to the canine corner of the world  (despite the fact that Dogku written by Andrew Clements and illustrated by Tim Bowers occupies Xena's Pick of the Month spot on the circulation desk in our elementary media center) it seems appropriate that Won Ton; A Cat Tale Told in Haiku (Henry Holt & Co., February 15, 2011) should be highlighted.

Lee Wardlaw using one of the most ancient forms of poetry tells the story of a shelter cat that finds himself a boy and a home.  These thirty-three haiku poems cleverly convey the reluctant but hopeful yearning of being chosen, the give and take adjustment in a different environment and the mutual love between the new friends.  Wardlaw is no stranger to the finickiness of felines as her precise selection of text captures the essence of all things cat; aloofness, casual interest, and reluctant insecurity.  Readers are brought full circle with the closing poem which will have them softly as cat's fur whispering, "Oh."


Coupled with this verse are illustrations by Eugene Yelchin that truly heighten the attitude of this cat.  Using graphite and gouache on watercolor paper Yelchin had me laughing out loud at the antics, emotions and facial expressions displayed by this creature.  As a pair Lee Wardlaw and Eugene Yelchin are purr-fectly matched.

Two of my favorite poems are:

What do you mean "Ewww"?
How is my tuna breath worse
than peanut butter?

Your tummy, soft as
warm dough.  I knead and knead, then
bake it with a nap.

One of the Newbery Honor Medalists for 2011 was Joyce Sidman's Dark Emperor & Other Poems of the Night (HMH Books for Young Readers, September 6, 2010)  Sidman is no stranger to awards.  Two previous books, Song of the Water Boatman and Other Pond Poems and Red Sings from Treetops were Caldecott Honor winners, illustrated by Beckie Prange and Pamela Zagarensky respectively. 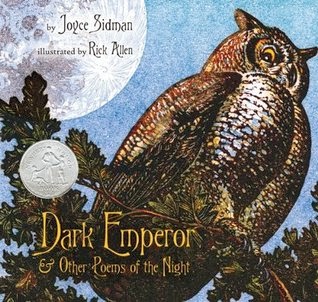 Twelve beautifully executed poems grace the pages of this mystical volume.  Readers feel as though they are quietly walking through the hours of inky, velvet shadow seeing it with new eyes.  To start a rhyming, lyrical verse invites all those inhabitants of the dark to come forth and be who they are.

...Come feel the cool and shadowed breeze,
come smell your way among the trees,
come touch rough bark and leathered leaves:
Welcome to the night....

Each subsequent poem features those creatures of the nighttime as well as the flora that surrounds them bringing strangers, that we are, into their world.  Through a variety of poetic forms and techniques, song, rhyme, free verse, or concrete, Sidman illuminates those particular qualities that make each subject unique.

Whether the pacing and placing of text is that of the poet or the illustrator it contributes to the overall richness of this work.  As if the poems are not enough readers are treated to concise sidebars on the far right of each two page spread giving further details about each dweller of the dark.

As stated on the back of the title page,

The prints in this book were made by the process of relief printing.  A drawing or sketch is transferred onto a block of wood or, in this instance, a sheet of linoleum mounted on wood, and the drawing is then cut and carved away using a variety of tools.  The areas left uncut are covered with ink and printed on paper by hand or on a press; a number of blocks can be cut and then successively printed in different colors, with the different blocks being "registered" or aligned to create a multicolored print.  The prints for Dark Emperor were each printed from at least three blocks (and in some instances as many as six) and then hand-colored with a strongly pigmented watercolor called gouache.

Rick Allen is an extraordinary artisan in his particular medium.  Extending the illustrations beyond the intended borders tempts readers to venture further noticing the subtle nuances of particular scenes.  Smaller graphics within the poems either highlight the intended subject or lend a bit of humor.  Careful viewers can follow one creature as it meanders through each poem among all the midnight magic acting as our guide.

Do yourself a favor by following Allen's link to his web site.  When considering the process of completing each piece, the results are amazing.
Posted by Xena's Mom at 8:38 AM