Pig To The Rescue

The Adventures of Nanny Piggins gives new meaning to the phrase, when pigs fly.  Within just a few pages readers will know that Nanny Piggins is indeed a flying pig, a former circus performer of quite some renown. (Who wouldn't fly through the air when shot out of a cannon?)  On a dark and rather stormy night she appears on the Green family doorstep having read the hand painted sign stuck in the yard by skinflint Mr. Green, Nanny Wanted: Enquire Within.  Although at a loss for words by the appearance of a well-dressed talking pig applying for the job,  Mr. Green, a tax lawyer, is unable to resist her demands for payment; ten cents per hour. 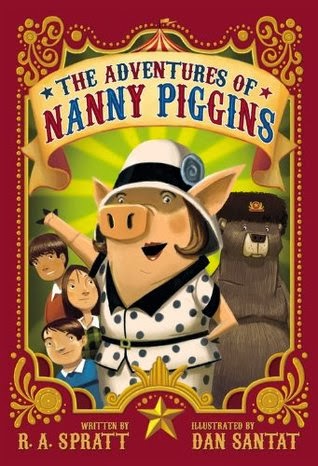 The three motherless children, Derrick, Samantha and Michael, immediately fall in love with Nanny and she with them.  After all who wouldn't enjoy having some form of chocolate for meals three times a day, or taking five crisp one hundred dollar bills of school uniform and supply money and spending it on a day at the amusement park with a porcine that upon finding out what school is, thinks it is a form of punishment.  When hearing that the government requires attendance five days a week, Nanny says:  Of course, I might have known...All the greatest psychopaths and evil villains end up in politics.  If the government is behind it, I suppose there is nothing that can be done

Not to be outdone by the nanny of the Wallace children Nanny enters not only a portrait contest at the museum but a town pie baking competition; both of which have hilarious and unpredictable results that will leave readers squealing with laughter.  And no one puts on the Ritz like this pig when accompanying Mr. Green to a company dinner, an error that he will not soon make again.  Never at a loss for a clever plan that addresses each and every obstacle that might impede their quest for fun, this plump porker, when not pigging out, is wiggling out of one mess after another.

Aussie author, R. A. Spratt, has given us a pig that anyone young or old alike would wish to be their nanny.  The icing on this cake are the illustrations of Dan Santat spread throughout this tale.  Oh, oh...I shouldn't have said cake...here comes Nanny!
Posted by Xena's Mom at 7:09 AM