With her body curled behind my legs Xena kept me company as I finished reading  Robert Blake's newest book, Painter and Ugly.  It seems fitting that this story should find its way into my hands as the madness of March, Alaska's Last Great Race, The Iditarod is nearly complete.  For two weeks every year I only stray from the computer due to demands of home and profession compelled by the perseverance, loyalty and beauty of watching the mushers work with their canine athletes. 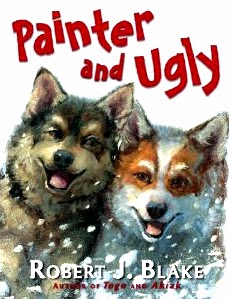 As in his previous books Blake's research is evident.  In an author's note at the book's end he relates staying with a family in North Pole, Alaska to gain insight into the care and training of dogs prior to their racing experience in an Iditarod.   It was while staying with this family that he met a dog named Painter who had been separated from another team that had a dog named Ugly.  This was perfect fuel for the creative fire  readers find displayed in Blake's work.

Painter and Ugly were best friends.  Through winter, spring, summer, and fall, they were always together.  Nothing could keep them apart.

Painter and Ugly are two inseparable members of a dog sled team.  They liked nothing better than running side by side, each the shadow of the other.  At the end of each dog sled racing season their musher left the dogs to run free on an island on the Yukon River.  But one year at the beginning of a new season all that changes as the dogs on the team are sold to multiple owners.  Painter and Ugly have been split apart.  Painter shakes off his loneliness to become the lead dog on his new team which is racing in the Junior Iditarod.

When race day comes amidst the barking dogs of all the teams one dog, Painter, nose to the air scents his pal, Ugly.  At the halfway point a mandatory rest finds both dogs quietly yipping at the other across the dark of night.  When the race continues the next day, both dogs perform a fete that is a testament to the definition of true friendship.  Readers will be cheering.  Once again we humans could learn much from our canine companions.

Using oils Blake beautifully captures the essence of Alaska and dog sled racing so well that readers can feel the cold, the exuberance of the dogs, and hear the swish of the sled runners.  His text gives just the right amount of detail to move the story at both an interesting and heartwarming pace.   As in other titles his endpapers contain a map of the race which further entices readers young and old alike.

Blake's previous books, Togo, winner of the Texas Bluebonnet Award, Akiak, winner of the Irma S. and James H. Black Award and Swift have found their way to the elementary school library shelves, where they rarely are, as well as my personal collection.  Robert Blake definitely knows dogs and that is exactly what makes reading his books anytime of the year pure pleasure.
Posted by Xena's Mom at 8:26 AM