The most dangerous sicknesses are those that make us believe we are well.---Proverbs 42, The Book of Shhh 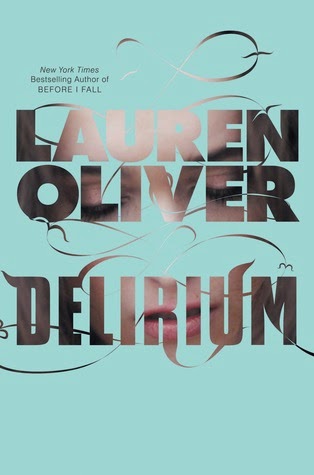 So heads Chapter One of Delirium.  Frighteningly enough it's a future that could be just around the corner.  In this world love is a disease, amor deliria nervosa, that upon turning eighteen is cured with a procedure. In just over three months Lena Holoway will no longer fear getting this disease.  Her fear is founded on the suicide of her mother who after three attempts was unable to be cured.  She died still loving Lena's father who lost his life to terminal disease.  The last whispered words Lena's mother said to her were:  I love you.  Remember.  They cannot take it.

It is during the required evaluation before her procedure that the rebels from the Wilds stage another protest in the form of cows being let loose in the center; dressed as people with the words NOT CURE. DEATH. on their sides.  During the hullabaloo she hears laughter coming from the observation deck.

As soon as I look up, his eyes click onto my face.  the breath whooshes out of my body and everything freezes for a second, as though I'm looking at him through my camera lens, zoomed in all the way, the world pausing for that tiny span of time between the opening and closing of the shutter.  His hair is golden brown, like leaves in autumn just as they're turning, and he has bright amber eyes.  The moment I see him I know that he's one of the people responsible for this.  I know that he must live in the Wilds; I know he's an Invalid.  Fear clamps down on my stomach, and I open my mouth to shout something-I'm not sure what, exactly---but at precisely that second he gives a minute shake of his head, and suddenly I can't make a sound.  Then he does the absolutely, positively unthinkable.  He winks at me.

That split shared second, that wink changes everything that Lena knew to be true about her corner of the universe.  That boy, Alex, forces her to create a new normal.


Lauren Oliver gives readers the best possible look into this dystopian tomorrow that has neighborhood patrols looking for missteps, curfews, segregated schools by sex, strict control through fear and violence,  and an emotionless society.  Her plentiful use of metaphoric language rather than bogging down the narrative brings the setting and characters vividly to life.

Readers be prepared to rush through the pages until the cliffhanger ending when you have to remind yourself to start breathing again.
Posted by Xena's Mom at 7:57 AM