Each one of us has one gift or more.  In our lifetimes, we will determine whether to embrace or set aside these gifts.  We will decide to use them to benefit a few or many.  Ultimately, the choice is entirely our own. 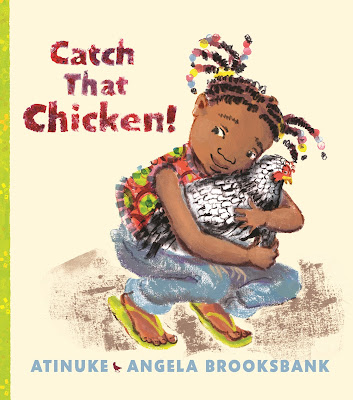 As a child, opportunities seem plentiful.  We look around noticing what others do and wonder what is best for us.  It's selecting one thing and then achieving it which can be a challenge. In the newest collaboration by author Atinuke and illustrator Angela Brooksbank (Baby Goes to Market and B Is for Baby) Catch That Chicken! (Candlewick Press, July 7, 2020) introduces readers to a little girl with the gifts of speed, agility, and courage.  These traits make her the best chicken catcher in her village.

This is Lami.
Lami loves chickens.
Luckily, Lami lives
in a compound . . .

with lots and lots of chickens.

As Lami races through her village after a particularly fast bird, friends, siblings, and adult family members call to her.

Using all the right moves, Lami is soon holding that hen in her arms.  No one can surpass the skills of Lami.

Running with her usual speed, one morning Lami bolts through a pen for the livestock.  Everywhere she goes in her village, everyone shouts at her to

Lami is so focused on getting that chicken, she chases it up a gigantic baobab tree.  Everyone is still calling for her to slow down.  She does not listen.  YIKES!  Lami falls from the baobab tree.

Her sprained ankle swells, and she cries in pain.  How will she catch chickens now?  Nana Nadia comes, sits next to her, and offers her some wisdom.  Lami takes Nana Nadia's words and rolls them around in her mind.  She knows what she must do. She does it because her reputation is consistent and constant, unwavering.


In one of the best storytelling traditions, the words penned by Atinuke invite reader participation.  Her simple, declarative sentences blend perfectly with the exclamations of people residing in the village with Lami.  Repetition of words creates a catchy cadence.  Alliteration is used to great effect.  Comparisons in a sequence of three lead readers to the fateful day when Lami learns of another gift she possesses.  Here is a passage.


You simply cannot look at the matching dust jacket and book case front (on the right of the opened jacket and case) without smiling.  Lami and the chicken she is embracing are colorful and endearing.  You expect them to begin moving at any moment.  The cream canvas is ideal for accentuating Lami and the hen.  Lami, the chicken and the title text are varnished.  To the left, on the back, text from the interior of the book is placed above three other chickens casually standing in the village.  They are in different postures.  The spine is decorated with a spring green and yellow pattern.

On the opening and closing endpapers two shades of spring green and brushes of white supply readers with a folk pattern found in the fabric of clothing.  The title, dedication and verso pages are one and the same with Lami already running after that chicken.  The background here and throughout the book is white.  The vibrant hues reach out and wrap around readers.

Each of the illustrations rendered in mixed media by Angela Brooksbank portray the liveliness of Lami and her gifts.  The image sizes range from double-page pictures, to a group of smaller visuals on a single page and to full-page pictures.  White space acts as an additional element, framing all the bright elements within each image.  For two pages to heighten the drama unfolding, Angela Brooksbank places three horizontal panels on each page.  Three of them are wordless.  She employs this same technique on another single page.  The point of view in her illustrations shifts to heighten the rhythm of the narrative, moving from close-up to the characters and then to a more panoramic outlook.

One of my many, many favorite illustrations is the first double-page picture as the story starts.  We are close to Lami and the chickens.  Five chickens cover, left to right, the lower half of the image.  On the right Lami squats. Her left hand is resting on her left knee.  Her right hand is outstretched as if in greeting.  Her lips are parted as she speaks.  In this moment we know Lami does indeed love chickens.  They must love her, too, because they look as if they are listening, even as two lower their heads seeking food.


If you are looking for a joyful story with a clever protagonist, this book, Catch That Chicken! written by Atinuke with illustrations by Angela Brooksbank is the perfect choice.  Readers will readily join in repeating the phrases.  This would be a great selection for readers' theater.  I know you'll want a copy for your personal and professional collections.