A New Voice Of Healing

Anyone who follows multiple news sources and reads a variety of fact-based publications, realizes for a variety of reasons these United States of America are in troubled times, facing difficulties never collectively experienced previously.  We are at a crossroads.  We have the potential to make significant changes for the good of many.  We have an opportunity to move forward, righting the wrongs of generations. 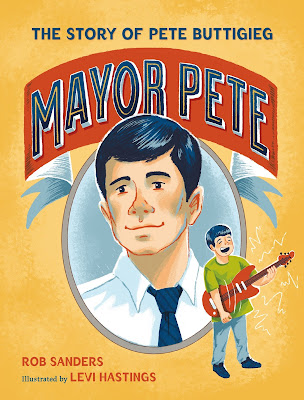 During this election year, November 2020, we have watched as political campaigns have unfolded before and after the worldwide pandemic.  One individual stood apart from the other people in his party.  He was the

first openly gay candidate to run for the Democratic Party

as President of the United States.  Mayor Pete: The Story Of Pete Buttigieg (A Who Did It First? Book) (Henry Holt And Company, July 21, 2020) written by Rob Sanders with illustrations by Levi Hastings chronicles from birth to presidential hopeful the life of this remarkable human being.

As a child, Pete saw the contrast between where he lived and the abandoned factories within his city.  Through attending Notre Dame football games with his father and as a member of the South Bend community, he was aware of wins and losses.  He was also a boy with dreams, dreams of being an astronaut.  He traded in piano lessons for playing the guitar in a band by the time he was attending high school.

Pete's focus shifted to public service early.  He had failed and was then successful in school elections.  By the time of his high school graduation, he was able to attend Harvard University.  Along with his studies in history and literature, he was an intern at the John F. Kennedy Presidential Library.  Abroad he continued to study languages.  He attended Pembroke College in Oxford, England learning about politics, philosophy, and economics.

Returning to South Bend, Indiana, he failed at running for Indiana state treasurer, but won as mayor of South Bend.  In each season, Mayor Pete tried to serve his citizens.  He was present as an official at weddings and ribbon cuttings.  He was a reader for second grade students in their classroom.  During his first term as mayor, Pete Buttigieg served in Afghanistan

as a member of the Navy Reserves.

Arriving home, safely, after military service, Mayor Pete needed to begin his reelection campaign.  He chose to be fully transparent, writing an article for the South Bend Tribune about being gay.  Pete won his reelection.  He entered into a relationship with a classroom teacher, Chasten Glezman.  They eventually married, living together in South Bend with their two adopted dogs.  On April 14, 2019 Peter Paul Montgomery Buttigieg announced he was running for President of the United States.  A milestone in American history was reached.


Combining his years of experience in the classroom, and his research, author Rob Sanders presents to his intended audience an interesting and informative biographical picture book including quotations from Peter Buttigieg.  His blend of facts with his style of writing reads like a conversation with poetic interludes.  His choice of words brings us into the places and times of Pete's life, his high points, and low points.  Repetition of specific phrases tie portions of Pete's life together, strengthening his personal purpose.  Here are several passages.

Pete had learned a lot about winning and losing.
Now Mayor Pete's job was to make sure South
Bend and its citizens won more and lost less.

Trading in his suit and tie for fatigues,
Pete drove and guarded soldiers in convoys
along crowded, dangerous city streets.
The work took flexibility, teamwork, and
communication.
This service wasn't about winning and losing.
This service was about life and death.


(Note: I am working with an ARC received from the publisher for purposes of this blog post. My personal copy will be arriving next week.)

Using vivid primary colors illustrator Levi Hastings superimposes guitar-playing high school Pete on South Bend's two-term elected Mayor.  The portrait with the ribbon-style display for the title text draws our attention to Pete Buttigieg's numerous accomplishments.  To the left, on the back, Mayor Pete is seen walking among a group of people of various ages, races, and genders during a campaign rally. (This is an interior illustration.) This smaller image is placed on a canvas of the rusty red.  Above it is another ribbon-style banner.  The text in it reads:

On the opening and closing endpapers is a pattern of objects representing some of the special moments in Pete's life.  There is a guitar, a history book, interlocking rings, an American flag, and a gold military star.  These are placed in a repeating pattern on a pale blue background.  The illustrations on the verso and title pages reference his achievements as a politician.

The illustrations on these pages

were created digitally on an iPad.

They span a single page, are smaller images on a single page, and are panoramic double-page pictures.  Most of them are surrounded by large portions of white space, allowing for the visuals to maintain our attention.  There is care in depicting detail and accuracy in particular places.  In those illustrations containing large numbers of people a representation of people from all walks of life is evident.  The illustrations are highly animated imbued with the same vitality Pete Buttigieg brings to everything he does.

One of my many favorite illustrations is a two-page picture.  It shows a large number of people with umbrellas standing in the rain waiting for Pete Buttigieg to announce his candidacy for President.  The large number of people are spread across both pages standing in front of buildings.  Pete is on the left, walking toward a microphone on a platform.  (This group of people numbered at least 1,500.  They were the people unable to be inside for the announcement.  That group was a bit more than 4,500.

Buttigieg told those assembled outdoors who huddled under umbrellas and
ponchos, "I am impressed by all those inside, but I am moved by those of you
outside." )


For those wanting an accessible and inspirational picture book biography about Peter Paul Montgomery Buttigieg, this book, Mayor Pete: The Story Of Pete Buttigieg written by Rob Sanders with illustrations by Levi Hastings, is an excellent choice.  It clearly illustrates in words and artwork how perseverance, and the use of your gifts can make your dreams a reality.  Two pages of back matter include a quotation, questions and answers, a timeline, and selected sources.  I highly recommend this for your professional and personal collections.

To learn more about both Rob Sanders and Levi Hastings and their other work, please access their websites by following the links attached to their names.  Rob Sanders has accounts on Facebook and Twitter.  Levi Hastings has accounts on Facebook, Instagram, and Twitter.  At the publisher's website you can view multiple interior illustrations including one of my favorite ones.
Posted by Xena's Mom at 10:24 PM