Regardless of the creatures we choose to share the hours of our days, other than humans, there will be those who wish for the impossible.  When the word impossible is used, it can be for a variety of reasons.  Perhaps the community or home in which we reside does not allow certain animals.  Perhaps our family does not have the monetary means to support our heart's desire.  Or perhaps, this particular animal we have selected has characteristics for which we have been warned but decide to ignore. 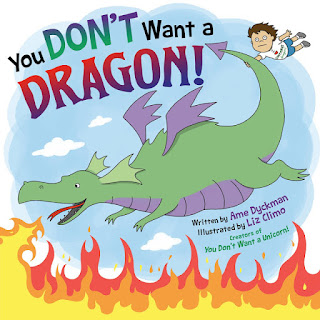 There are those who have for generations longed to look out their window and see a unicorn grazing in the grass outside their home.  As long as we are imagining, there might be a note around the unicorn's neck saying this marvelous being now belongs to you.  After reading You Don't Want a Unicorn! written by Ame Dyckman with illustrations by Liz Climo all thoughts of this pursuit are dispelled, but that story ends with another warning, a wish, a poof, and the image of a fire-breathing dragon emerging from a cloud of green.  You Don't Want a DRAGON! (Little, Brown And Company, June 9, 2020), a companion title by this collaborative team, proves a point amid loads of laughter.

I TOLD YOU not to wish for a dragon!

When it comes to having fantastical critters, this boy simply does not learn any kind of lesson.  His memory is short, truly short.  The narrator is quick to remind him of all the unicorn complications, while adding a dragon is even more problematic.  Despite the fun of flying, fire-breathing and eliminating danger in a single gulp, dragons can exhibit dog-like characteristics . . . only much, much bigger.

In case you dear reader might be wondering where charcoal originates, you won't wonder any longer.  People will be puzzled by your unwillingness to enjoy cookouts any longer.  Wagging, digging, and scooting are amplified.  Did I mention the fire already?

The most unplanned outcome is about to happen.  It happens again, again and again.  It's back to the wishing well for this little guy.  The narrator is encouraging though, because nearby is a Pet Adoption Day! event.

Within no time at all, the charming chap finds his super-duper pet.  As readers start to breathe a sigh of relief at the outcome, the new little explorer gets out of its cage.  Our hero is still in the midst of cleaning up the mess from the unicorns and dragon.  There is one particular item, this new resident cannot resist.


If there is one lady in children's literature who can conjure up hilarity, it's Ame Dyckman.  The unseen narrator does not waste a single second before beginning commentary loaded with comedy.  The voice begins with grudging acceptance of the joyful moments having a dragon can bring, but that ends abruptly.  The parallels between a dragon and a dog heighten the humor.

As the negative attributes begin to overwhelm our already traumatized protagonist, the narrator becomes even more determined, but also compassionate and willing to assist.  This is a lull, a tricky technique leading us to believe the story is to be quietly resolved. HA!  The pacing is precise and perfect as it takes us to a magical funny conclusion.  Here is a passage.

I know.  You're doing
your best!  But I haven't
even gotten to the most
GINORMOUS problem
with having a dragon:

laughter and love, the illustrations by Liz Climo start with the boy grasping the dragon's tail, a tad bit of trepidation in his demeanor.  Observant readers will notice he is still wearing his I ♥ Unicorns t-shirt but the word unicorns had been crossed out to make a place for the word dragons.  The dragon is thrilled to have been wished into existence.  The flames along the bottom are a huge hint of the scorching yet to be revealed.  The green on the dragon's body and the title text DRAGON! are shimmery.

To the left, on the back, on a canvas of red an interior image is displayed.  This is the first incident of the dragon being not quite so much fun.  The words:

The book case uses a white background, left to right, to highlight an enormous interior illustration.  It's the dragon in a huge pool of drool, sound asleep.  It's super gooey as the boy's hands demonstrate.  His facial expression is one of disgust.  An arrow points to the dragon with the word

(These names are priceless.)

A double-page picture of the boy and his newly-wished-for dragon in the park by the wishing well greets readers on the title page.  White is used throughout as an element to great effect.  It helps the other images to appear to leap off the page.

Small images, single-page pictures, and dramatic double-page visuals, highly animated, are laden with humor.  The looks on the boy's face and the dragon's face are certain to have readers laughing out loud.  The added details, the toilet paper roll on the dragon's foot, the burnt lampshade, the dragon eating BBQ CHIPS and the boy's broken piggy bank elevate every funny moment.

One of my favorite illustrations of many is a double-page image.  It's the inside of the boy's home after the unicorn party and the dragon's scooting.  The walls are white except where they've been burned, or the drywall is off, or the unicorns left a drawing and writing.  The pictures, still hanging, are askew.  There are still some balloons near the ceiling and some streamers.  Cupcakes and charcoal are scattered on the floor.  So is the broken piggy bank.  The boy, looking totally harried, is holding a fire extinguisher.  The dragon, behind him, is munching on chips.


Every day with laughter is cause for celebration.  This book, You Don't Want a DRAGON! written by Ame Dyckman with illustrations by Liz Climo will have you grinning, giggling, and guffawing.  You will have many requests for read it again.  This duo has created a wonderful companion title.  I highly recommend it for your personal and professional collections.

To learn more about Ame Dyckman and Liz Climo, and their other work, please follow the links attached to their names to access their respective websites.  Ame Dyckman has an account on Twitter. Liz Climo has accounts on Facebook, Instagram, Tumblr, and Twitter.  Scholastic's Ambassador of School Libraries, John Schumacher, hosted the cover reveal at his site, Watch. Connect. Read.  You'll enjoy the conversation between him and Ame Dyckman and Liz Climo.  The publisher has a downloadable four-page storytime kit.  Ame Dyckman was featured at Picture Book Spotlight on March 31, 2020.
Posted by Xena's Mom at 9:52 PM