Wrapped In Memories Of Love

When we as adults look back on our childhoods, our grandparents, if we are fortunate to have them in our lives, are usually a steadfast foundation upon which our lives blossom with positivity.  Their experiences give them a unique wisdom and an immense capacity for compassion.  Days spent with them are gems to store in the treasure chests of our hearts. 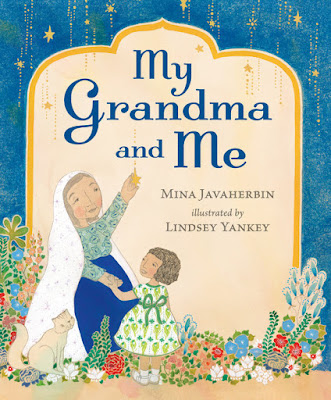 Grandmothers have a special strength on the inside and on the outside.  In My Grandma and Me (Candlewick Press, August 13, 2019) author Mina Javaherbin writes of the devoted and lasting relationship between her and her grandmother.  It is a bond fashioned by a grandmother who believes in the potential of her granddaughter.  It is a bond built by a generous heart.

WHEN I WAS GROWING UP IN IRAN, my grandma lived with us.

When Mina's grandma prayed at dawn, Mina was up with her.  As her grandmother knelt, Mina rested on her back.  When the older woman rose, she did it carefully so Mina would not fall.

When her namaz was completed, the twosome waited for the delivery of bread brought daily by a boy.  Loaves were stacked like a small tower on the back of his bike.  To avoid going to the street, they lowered baskets so the bread could be placed inside.  Bread was taken to Annette, Mina's best friend, who lived next door.

As the girls played the grandmothers chatted.  They were best friends, too.  The grandmothers knitted blankets given to Mina's grandma's mosque and Annette's grandmother's church.  (In a beautiful description of the two elders' heads bent near each as they worked, Mina describes one as silver-haired and the other covered by her favorite chador.)

Mina's grandma sewed all her chadors.  Mina played beneath the fabric-draped table soaring into imaginary adventures.  When she was old enough Mina fasted with her grandma during Ramadan.  (Her recollections of one particular night will strike a chord in all hearts.)  A whispered secret shared by Mina and Annette speaks to the atmosphere of affection in which both girls were raised.


Each time you read this book (And believe me, you'll be reading it multiple times.) the cherished relationship between this girl and her grandmother, as written by Mina Javaherbin, will fill your soul with its heartwarming joy.  Each detail of their daily lives is one more layer of endearments building toward the book's final paragraph.  These remembered ordinary incidents become extraordinary because they are the very definition of love's purest form.  Here is a passage.

Or tying her chador around my neck so I could fly
from the moon to planets.  I was a super-astro-explorer!
My grandma was always waiting for me back at the
base camp with cookies.  We ate together while I told
her about my space adventures.


The open and matching dust jacket and book case full of delicate, intricate elements portrays the richness of the lives of Mina and her grandma and the country in which they lived.  The cascade of stars represents their imaginative travels and the stellar nature of their connection.  To the left, on the back, an exquisite border along the top and bottom extends to the flap edge and is also used on the front flap.  (This is the same pattern on the border of Grandma's prayer rug.)  In the space between the borders is a small drawing of two birds; one older and the other younger.  Beneath this image are the words:

When I was growing up
in Iran, my grandma
lived with us.  I followed
her everywhere.

On the opening and closing endpapers a pale gold and cream pattern in loose hexagons features points and stars. (This design appears in another illustration as a rug on the floor in the kitchen of Mina's home.)  Dainty, stylized flowers become a border along the bottom of the title page.  A tree blossoms with the same flowers.  This motif is shown in the back on the dedication and publication page in reverse.

Each picture, rendered in mixed media, spans two pages or a full page.  The muted colors allude to the deep fondness expressed by Mina and her grandma.  They also represent a sense of serenity and security.  In some of the pictures illustrator Lindsey Yankey places items in different points of view with portions of them crossing the gutter to touch the elegant framing for the text.  The fine lines employed by Lindsey Yankey are stunning.

One of my many, many favorite illustrations is of Grandma praying at dawn.  In the background from left to right are two different wall colorings, a pale golden-brown shifting to white.  Mina's grandmother is bowed from the left to two-thirds of the right half.  She is wearing her favorite chador, white with tiny purple flowers.  The rug upon which she prays is a beautiful floral pattern in reds, browns, gray, blue and green.  Grandma is facing out at the moment, perhaps to make sure Mina is safe.  Mina is resting on her grandma's back.  She is wearing light blue shoes with a bunny on the top.  Her dress is patterned in shades of green on white.


Everyone will be able to identify with the love presented on the pages of My Grandma and Me written by Mina Javaherbin with illustrations by Lindsey Yankey.  Through this book we can not only appreciate the relationship between Mina and her grandma, but reflect on our relationships with our grandmothers or an beloved elder woman in our lives.  This book is lovelier than my words can say.  I highly recommend it for your personal and professional collections.