Resting easy can disappear.  There are times, sometimes more often than others, when sleep is elusive.  There's lots of tossing and turning and dozing in and out of dreams.  No one is alone in this.  It happens to everyone at any age. 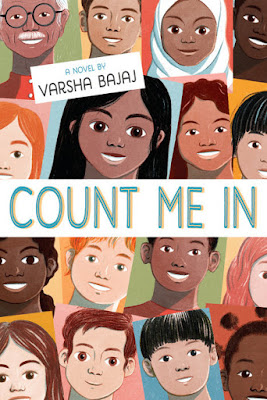 Readers do have an advantage in these instances.  For whatever reason, when sleep takes a vacation, we turn to books any time of the day or night.  In light of the events in America during the first weekend of August 2019, early on Sunday morning I began a book and finished it before noon.  I read it again, cover to cover on Monday.  This book, Count Me In (Nancy Paulsen Books, an imprint of Penguin Random House LLC, August 27, 2019) written by Varsha Bajaj, is an important and relevant book, especially now but also because its message is timeless.

CHAPTER 1
KARINA
CHRIS DANIELS AND I are like separate planets orbiting in the same place.
Like the planets, we have our own paths, and I like it that way.  Mine is full of photos and stories, and his is full of basketball and hyenas.
Like Venus and Earth, we are next-door neighbors.  We've been in the same school since I moved to the neighborhood in third grade, but we've been in the same class only once-fifth grade.
Then, of all the crappy karma, there he is, on the first day of seventh grade, in five out of my seven classes at Spring Hill Middle School.

In this first of alternating chapters, we are introduced to Karina Chopra, a granddaughter of immigrants from India.  Both she and her parents were born in the United States of America.  She has been the target of bullying and racism.  She does have the support of loving parents who own and run a sandwich shop, a best friend named Ashley, her passion for photographs, her interest in reading and her Papa, her father's father, who is coming from California to live with them in Texas.

The voice of Chris Daniels speaks loud and clear in the next chapter.  He does not want Karina to think he is

one of the mean dudes.

He recounts, as did Karina, the incident in sixth grade when she is targeted on the bus ride home from school.  He is upset about it and speaks by phone that evening with his older brother, Matt, away at college.  He also confronts the boy, a member of his basketball team, who lead the bullying on the bus and wrote a racist note to Karina in class.  Karina has no knowledge of Chris's thoughts on this.  They haven't said a word to each other in years.

This silence between them changes because of two seemingly unrelated events, the arrival of Papa on Labor Day weekend and a note sent to Chris's parents about his less than stellar performance in math class.  After a week at Karina's house, Papa is a relentless, restless efficient bundle of energy.  Karina's mother discovers her school needs volunteers to tutor math students.  When Papa tutors, Karina will stay late at school with him.  Papa is assigned by the teacher to Chris.  The connection between Papa and Karina is already strong but through the tutoring it grows between Papa and Chris.  The three build a bond on common interests and a growing respect for their individuality.

One afternoon after tutoring, walking to Papa's car parked on the street by the soccer field, a car slows down and stops next to Karina, Chris and Papa.  The man steps out and begins to throw racial remarks at Papa.  They are asked for their phones which are thrown into the bushes and the man pulls a knife. In an effort to protect the children, Papa is severely injured.  A woman across the street, taking her trash cart to the curb, scares away the man by yelling at her husband to call 911.

In the next twenty chapters we are privy to how this hate-based attack changes everything for Karina and Chris, Papa, their families, friends, their immediate community and the greater community of the United States of America.  It involves the positive power of social media to enhance change, the response of middle school friends in beginning something small which grows to something large, and how good people rise in solidarity against hate.  Hate seems to always be present, but the resilience of people, of these children, to stand up against it, is never to be underestimated.


For educators who have worked with middle school students, the words written by author Varsha Bajaj ring true.  By using the technique of alternating chapters between Karina and Chris, we are able to follow the evolution of their thinking and their relationship as loyal friends.  The short chapters engage readers and help to build tension prior to the attack.  They bind us to the resulting personal and very real issues after the assault.

The inclusion of conversations between all the characters heightens our interest, revealing the personalities of each individual.  We are fully committed to their stories.  We understand all the facets of family life and interactions between parents and children.  The presence of compassionate and concerned adults, teachers, the journalist, the law enforcement officers and rehabilitation personnel, and an older sibling is welcome.  (As a child who was raised to believe that each generation's purpose is to make this world better for the next generation, it is important for the intended audience of this book to realize there are people, despite a wide range of situations in which they find themselves, who will assist them.)  Here are a few of the many passages marked in this book.  (I am working with an Advanced Reading Copy.)

"What'd you do?" he asked.
What could I have done?  I had asked myself that question.  I was sitting on the bus with the guys from the basketball team, and I had only waited forever to be able to sit with them---to be one of the guys.  If I had said something at the time, what price would I have had to pay?
The middle-school bus is a monster that no one has slayed, as far as I know.  Being quiet---biting your tongue, swallowing your thoughts and words---is how you survive.  So far, those tactics have worked for me.
"Doing the right thing is hard," he said when I was silent.  "But Chris, at least you know what is right and wrong."
I did know the difference, but was that enough?  Did I need a new game plan?

Then more quietly but with steel in his eyes, Papa says, "Karina, we are not going to let that hater take us down."
I hold back my tears.  I nod in agreement.
"That man will not win.  He will not defeat us," he says.  "I have traveled too far for that."
Dad adjusts Papa's blanket and puts his hand on his shoulder to reassure him.
Papa's words make me feel less scared and alone.  This morning, the path was as dark as the night before.  It's as if Papa has turned on a flashlight and shown me the way forward.  If he is going to fight, so am I.

Like Mr. C says, you have to be able to imagine a better world to make it a reality.


This book, Count Me In written by Varsha Bajaj, takes us beyond news reports we may read or hear.  It takes us into the hearts of individuals who experience a hate crime.  It does this in the context of home, school and community situations weaving all together, the good and the bad, flawlessly.  I highly recommend this for your personal and professional collections.

UPDATE:  Varsha Bajaj speaks at Brightly about racism and hate.  Varsha Bajaj is interviewed at CBC Diversity.
Posted by Xena's Mom at 2:03 AM