The largest one can weigh more than forty pounds.  It usually does not travel farther than from top to bottom.  This is why they are endemic to the Republic of Seychelles.  Dispersed in the air like dust, the smallest is believed to be 1/35,000,000th of an ounce in weight.  Millions of them are produced from a single source.  From the first a coco de mer tree will flourish.  From the second a special specie of orchid will bloom. 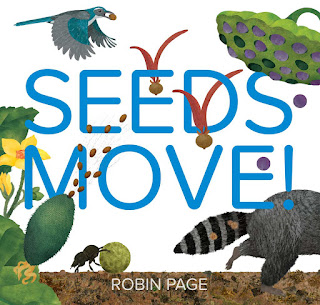 Seeds seem to house miracles when they transform into any one of the vast assortment of plants.  Seeds Move! (Beach Lane Books, an imprint of Simon & Schuster Children's Publishing Division, March 19, 2019) written and illustrated by Robin Page presents all the actions associated with the distribution of seeds.  Nature has supplied clever modes of transportation carefully considering a range of habitats.

A tiny seed can one day become a flower, a fruit, or even a giant tree.

For a seed to perform its task, it requires water, air and the right temperature.  For many of them light is also a necessity.  Unlike the giant seeds of the coco de mer tree, the majority must leave the plant which produces them.

Sixteen action verbs describe the movements of sixteen seeds.  Some are designed to attach themselves to a moving body of an animal.  Others burst forth from their pods through touch or timing.  The large coconut drifts on water until it successfully finds new land so a palm tree can grow.

Some seeds trick insects, through taste, into taking them underground so they can germinate.  Frequently animals will gather seeds to eat but store them by hiding them in the dirt.  They can forget where all of them are placed, leaving the seed to create a new plant.  Did you know the durian fruit is a delectable treat to orangutans?  The seeds, though, are not tasty; so the orangutan spits them out.

The pods are already forming on the milkweed plants.  Soon those seeds will act like parachutes spreading where the breezes take them.  With berries on wild bushes handy for wild animals, seeds are carried inside them until they are released in their feces.  Readers are encouraged to plant their own seeds; specifically following the growth of a watermelon seed.  What was the last seed you planted in your garden?


As you read through the methods used by seeds to move, you'll find yourself thinking of other explanatory verbs to represent their actions.  This is an excellent technique by author Robin Page.  Simple sentences of only three words make an initial statement.  These are followed by information about the seed and the plant from which it comes. This, too, invites readers to explore more about the plant and where it is found.  Here is a sentence and the following details.

A seed sinks.
A lotus seed drops from its
pod and sinks to the bottom
of a pond.  There it will nestle
into the mud and sprout.


Digitally rendered, all the illustrations, beginning with the open and matching dust jacket and book case, are realistically detailed in layers reminiscent of collage. On the front of the jacket and case six of the sixteen movements are presented through an engaging design and layout with the natural colors more noticeable on the white background.  To the left, on the back, we are brought very close to a spiny mouse who gathers and scatters seeds.  This is an interior image, too.

The opening and closing endpapers are a rich spring green. A combination of two other images are pictured on the title page.  For the introductory paragraphs, the blue used for the text on the jacket, case and title page becomes the canvas, supplying a striking contrast to the floating milkweed seeds.

Subsequent images are either double-page pictures or full-page pictures.  Once a portion of one image carries to the opposite page.  For the most part, Robin Page brings readers close to the seeds, enlarging them as they move.  Ants are as big as an adult hand.  A featured dung beetle is barely shy of the larger specie (6.7 inches) and sixty-two times as big as the smallest one. (National Geographic Kids)  Sometimes two perspectives will be showcased in a single image.

One of my many favorite illustrations spans two pages.  Along the top half of the image a sandy beach stretches left to right.  Above this is a row of palm trees and other island vegetation.  White clouds are feathered on the blue sky.  In the ocean on the left a coconut drifts close to readers.  We can see a small stem and leaves have sprouted.  On the right a sea turtle is at rest under the surface, smaller in contrast to the seed.


When you think of this book, Seeds Move! written and illustrated by Robin Page, you know as a read aloud younger audiences will be asking to have it read again.  This would make for a wonderful creative drama reading with motions attached to the verbs.  You could also have children brainstorm other verbs attached to the movement of seeds.  For further research have children look up the plants and their locations, perhaps placing pins on a map to designate their homes.  I would pair this title with A seed is the start (National Geographic, February 13, 2018) written by Melissa Stewart.    You will certainly want a copy of this title for your professional and personal collections.

To learn more about Robin Page and her other work, please follow the link attached to her name to access her website.  At the publisher's website you can view interior images.  At School Library Journal, The Classroom Bookshelf, there is a fabulous post featuring this book and multiple lessons and resources.  (It's author mentions motions and creative drama also.)
Posted by Xena's Mom at 12:30 AM