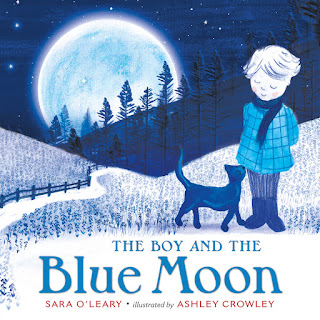 With this event occurring only every nineteen years, folklore contains references to superstitions and beliefs attached to blue moons.  Regardless of scientific evidence, educators and parents of children and pets know these individuals are affected by a full moon.  When there are two in a single calendar month, the unexpected is to be expected.  The Boy And The Blue Moon (Godwin Books, Henry Holt and Company, February 13, 2018) written by Sara O'Leary with illustrations by Ashley Crowley follows two companions taking an enchanting nighttime journey.

On the night of the blue moon, a boy and his cat went for a walk.
Inside their house the light was warm and yellow, but outside it was blue and magical.

As they are walking the boy pauses and turns to his cat advising him of the special significance of a blue moon.  Their path through a field filled with flowers leads them ever closer to the woods.  As they enter the trees a song rings out from the branches.  What is making this music?

Although the boy explores this trail frequently, it is not the same on this night.  A lake appears in front of them.  Along this shore never seen before is a boat.  Both the boy and his cat climb into the boat.

A reflection of the blue moon on the water beckons to the boy and his cat in the boat.  Many nights the boy has wished to visit the moon but tonight he puts his whole soul into that same wish. (The cat wishes, too.)  These two friends find themselves transported.  On a blue moon night wishes can come true.

Their exploration of this celestial body is exactly as imagined.  As they rest, the boy holding his cat sees a tiny glow from down below on Earth.  It calls to them as the blue moon on the lake did.  In the morning an assumption is reaffirmed.


From beginning to end, the sentences penned by Sara O'Leary sing like the song heard by the boy and his cat in the book.  They flow like notes strung together in a line of music.  They supply a hushed atmosphere; one where anything is possible.  As the duo gets farther into the woods, you know something is going to happen, something extraordinary.  It builds inside you like hopeful anticipation. Here is a passage.

The trees of the forest
were blue as well, and
somewhere high in the branches,
something was singing.  It might have
been birds or it might have been dragons.


If you open the dust jacket, the path along the fence stretches to the left on the back.  Above the fence on a hill sits the home of the boy and his cat.  Lights glimmer in the windows on both floors.  The starry sky provides a backdrop.  The many layers and hues of blue cast, like the light of the moon, a deep sense of calm and a spell filled with promise.  On the book case a deep, deep blue sky with a few stars spans the front and the back, trees like black lace line the bottom.  On the right the full blue moon lights the center.  From one side to the other a bridge allows the boy and his cat to continue on their journey.  They like the trees are in black.

On the opening and closing endpapers seventeen different small images with shining borders of blue light feature elements from the story like the boy and his cat, a telescope, books on the moon and a pair of boots.  They are placed on a star-studded sky.  The field of bluebells covers the lower third of the verso and title pages.  The cat is standing among them on the right.  A canvas of white above the flowers provides space for the text on both pages.

Rendered in blue inks applied using a water brush pen, gouache paint, graphite sticks, pastels, colored pencils, and Adobe Photoshop the illustrations of Ashley Crowley envelope the reader in the sensory marvel of this blue moon night.  The hues of blue contrast with the white in a stunning display.  The affection between the boy and his cat is evident in their body postures and facial expressions.  Aren't the highlighted cheeks on the boy wonderful?

Spots of red appear in significant elements in some of the pictures.  The image sizes vary in keeping with the pacing of the story.  Ashley Crowley gives us many breathtaking panoramic views.

One of my many favorite illustrations is when the boy and his cat are paused during their travels.  It covers two pages.  They are standing in the field of bluebells.  A fence goes from the left to the edge of a row of trees spanning toward the moon which rises large and blue above the horizon on the right. Tree silhouettes cover the rolling hill on the right.  Between the trees the white path winds.  You can feel the stillness.


Perfect for anytime but especially wonderful on a full moon night, The Boy And The Blue Moon written by Sara O'Leary with illustrations by Ashley Crowley is sure to be a beloved bedtime or story time treat.  Readers and listeners will be captivated first by the walk taken by the boy and his cat but will be thrilled when their wish is fulfilled.  Get cozy and get comfortable and wander into the magic of this night.  You will want to include this title in your professional and personal collections.

To discover more about Sara O'Leary and Ashley Crowley and their other work, please follow the links attached to their names to access their websites.  At the publisher's website you can view interior images.  Both Sara and Ashley maintain Instagram accounts.  Sara chats on a podcast at CBC about this title.
Posted by Xena's Mom at 12:00 PM