They will draw more than the usual attention.  They are like night and day, up and down, fast and slow, and happy and sad.  They are opposite sides of the same coin.  Individuals can't help but stop and stare. 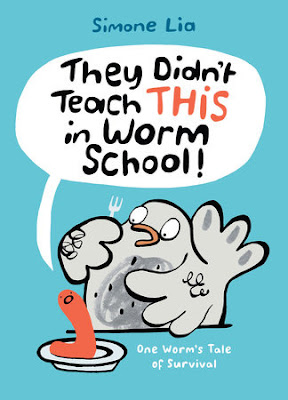 If ever there were two individuals most unsuited to be friends, it's when one is the other's favorite meal, morning, noon and night.  They Didn't Teach THIS in Worm School! (Candlewick Press, February 13, 2018) written and illustrated by Simone Lia is a book about one of those relationships.  This worm and this bird and their highly unlikely companionship will have you howling with laughter.

Chapter One
My name is Marcus.
I am a worm, and this is where I live.
My favorite color is brown.
That's because mud is brown and I really, really, really like mud.

Marcus was living a life he loved until one day digging a hole and then falling asleep changed his entire life.  The next realistic thing he remembered was falling from a can.  A bird looking more like a chicken than a bird was giving him a look which would have any other worm frozen in fear.  Marcus was not any other worm.

He smiled and proceeded to engage this bird, Laurence by name, in an engaging conversation.  Laurence it seemed was an unusual bird.  He believed himself to be a flamingo.  He wanted to locate other flamingos, specifically those residing by Lake Nakuru National Park in Kenya.  Before Marcus knew what was happening his new career was that of navigator for Laurence on his flight.  His attempts to avoid this job and get back to digging only served to endear him to Laurence even more.

When Marcus lost the map within mere minutes he had to "wing it" as far as giving Laurence directions from the air.  An accident revealed the loss of the map but a quirk of fate and a skewed view of the surroundings set them back on course to Kenya.  A mole, a squirrel, a crow and a whole bunch of worms figured prominently in the next series of events. (Major eye-rolling, head shaking and laughter is guaranteed.)

Finally continuing their journey the exhausted duo found themselves waking in the morning with the nose of a zebra sniffing them.  As Marcus and Laurence explored their new surroundings they failed to connect the clues as to their geographical position until they saw a familiar beatboxing scamp.  New disclosures had this worm and this bird re-evaluating identity, travel, adventure and the meaning of friendship.


Humor is sure to be present when a story has a worm and a bird becoming best friends.  Simone Lia through the voice of Marcus and the dialogue between Laurence and Marcus and the wonderfully funny cast of characters creates madcap and moving moments.  The contrasts in personality and intelligence of Laurence and Marcus provide one hilarious episode after another.  During their adventures Simone Lia shows readers how individuals can grow and expand their very natures, becoming the best they can be.  Here are some of my marked passages.

What would you do if you were a worm and there was a bird two inches away from your face, looking at you with his beak open so wide that you could see his tonsils?
Maybe you would do what I did.  I smiled a big smile and said in my most cheerful voice,
Good morning!

"And secondly---you probably know this already---but when you cook worm, you have to add tarragon.  You know about tarragon, don't you?  It's an herb.  You do have some for the stew, don't you?"
The mole looked at the squirrel, and the squirrel looked at the crow.  The crow shook his head.
"No, we don't," said the mole.
"Oh," I said, shaking my head, too, pretending to be sad that they didn't have any tarragon.
"What?" asked the mole.
"Well, if you add worm without tarragon it's going to ruin the flavor of the whole stew.  And if it ruins the flavor of the stew, then you won't get that hug in your heart."

As we went around and around in circles, I wondered if I would be wearing a twig hat on my head while chanting if I were back at home.  I thought to myself that I would have laughed at these guys and said that they were all off their rockers.  But here in France I didn't have much choice but to try to blend in with the locals, even if they happened to be total weirdos.


In looking at the front of the case cover (I am working with an ARC.) you can view the limited color palette employed by Simone Lia for this title.  In this volume all of the interior illustrations are in black and white.  With every page turn images enhance the pacing and heighten the humor.

Simone Lia shifts the sizes, perspective and number of illustrations per page to accentuate the plot.  Sometimes she will use line drawings and at other times the visuals are filled in with shading.  Several times sounds will be added to the pictures as well as speech bubbles for exclamations.  It's amazing how she is able to convey the moods of her characters, especially Marcus, with the adept use of lines.

One of my many favorite pictures is when Marcus believes he and Laurence are in the presence of the Eiffel Tower.  When you contrast this visual with their conversation, you can't help but laugh.  The duo is perched on top of a fence post.  Stretching from the left to the right of a two-page illustration is a row of electrical towers (pylons) connected with lines.  Behind them is a row of trees and in front of them a field extends to the fence where Marcus and Laurence are looking on in awe.


If you love to laugh and enjoy the idea of an unexpected friendship, They Didn't Teach THIS in Worm School! written and illustrated by Simone Lia is a book you absolutely need on your professional and personal bookshelves.  Even repeated readings will cause you to guffaw at the situations this worm and this bird encounter and their responses.  You should consider multiple copies.

To learn more about Simone Lia and her other work, please follow the link attached to her name to access her website.  At her website she has excerpts from the book and views of her artistic process.  At the publisher's website you can view an interior image.  At another publisher's site you can read the first thirty-one pages.  There is a short interview with Simone Lia at The Children's Book Review.
Posted by Xena's Mom at 3:22 PM