Back To The Place Called Home

Now, after two weeks, when pressing my face into her fur it triggers new sensations.  There are odors of sunshine, evergreens, lake breezes and wild.  Her soul is new too, her spirit soaring as we traverse paths and roadways through northern Michigan woods.  Startled deer leap in front of us.  At any given moment my canine companion will freeze, listening and sniffing the air. 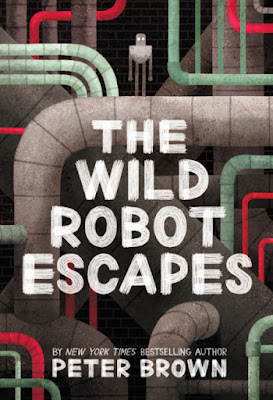 Today in the very early hours of the morning after finishing, for the second time, The Wild Robot Escapes (Little, Brown and Company, March 13 2018) written and illustrated by Peter Brown, later, during our first walk, my mind wandered in different directions.  It was wonderful to compare the second title with the first, The Wild Robot (Little, Brown and Company, April 5, 2016).  Using my senses to take in these pristine surroundings and all they offer, it was easy to think of ROZZUM unit 7134 affectionately known as Roz.  It was easy to imagine her walking along beside us or appearing in the woods when she believed we meant her and her friends no harm.

Without divulging too much, at the end of the first title, Roz is forced to leave those and that which she loves most.  I know what you are thinking.  How can a robot love? Roz is an extraordinary being.

Chapter 1
THE CITY
Our story begins in a city, with buildings and streets and bridges and parks.  Humans were strolling, automobiles were driving, airships were flying, robots were hard at work.
Weaving through the city streets was a delivery truck.

Picking up speed this truck zooms away from the city and past vast stretches of country landscape until it reaches one specific farm, Hilltop Farm.  It stops and drops out a crate.  Inside is a ROZZUM unit.  It is number 7134.  Roz.

What the farmer, Mr. Shareef, his dog Curly, and his children a daughter, Jaya, and a son, Jad, do not know and cannot know, is Roz will exceed the required work needed to be done on the dairy farm.  (After the death of his wife and an injury, Mr. Shareef, is desperate to save this family land.)  That first night, the cows in the barn, like the animals on the island, discover Roz's mind does not function as the technology in other robots does.  She speaks their language.

Day after day a routine forms as Roz repairs the other automated equipment and maintains every aspect of this farm.  She is as content as one can be when living two lives and longing for home. As the seasons shift, flocks of geese stop at the pond on the property. Conversing with them, she gets a promise.  She starts to plan . . . her escape.

It does not miss the attention of the children that their robot has special qualities.  Storytelling sessions begin.  There are stories of a wild robot on an island and her son, a goose named Brightbill.  Jaya and Jad are completely captivated.

A pack of wolves, a wild tornado, a summer night around a campfire, the existence of an old barn, the arrival of a special flock of geese and a startling revelation alter relationships.  More secrets are kept and an expanded plan is put into action.  Spring brings renewed hope as well as increased fears.

Readers' hearts will race as surely as the heart of Brightbill and the survival mode wired into Roz as they attempt to reach a goal.  Danger is a constant companion.  At any moment they realize they might never see each other again.  At any moment they realize one of them could die.  Expect the unexpected as this breathtaking companion title thrills us until the final word is read.  That word will sound in every soul.


When a book starts with

readers are immediately drawn into the plot.  We step into this narrative as if it's our own.  From time to time throughout the story, this unseen narrator will carry on casual conversations with us.  This technique is brilliantly employed by Peter Brown and it is as successful here as it was in the first title.

Short chapters with short definitive titles propel us forward as quickly as we can turn the pages.  The end of each one connects flawlessly with the following chapter.  A blend of conversations and narrative text give us insight into the characters thoughts, moods and motives.  Vivid descriptions of setting further envelope us as we move from one landscape to another.  Here are some passages.

The cows and the humans spent hot days indoors.
Only when the sun finally set and the air began to cool would they venture outside.  The herd strolled out to graze under the stars, the children ran out to chase fireflies, sometimes even Mr. Shareef stepped out to stretch his stiff legs.
Leaves rustled in the evening breeze.
Heat lightning flickered on the horizon.
Cicadas sang from tree branches.

"Running away might be easy for you, but not for me," said Roz.  "Your father can track my movements.  If he sees me trying to escape he will think I am defective, and he will send me away to be destroyed."
An uncomfortable question popped into Jaya's mind.
"Roz, don't take this the wrong way," she began, "but is it possible that you are defective?"
"Don't say that, Jaya!" cried her brother.
"No, it is okay," said the robot.  "I have asked myself that same question.  I do not feel defective.  I feel . . . different.  Is being different the same as being defective?"
"I hope not," said Jaya.  "Otherwise we're all a little defective."

Even way out there in the wilderness, she wanted to go unseen.  What Roz didn't realize was that she was already being watched.


Having read an ARC generously supplied by the publisher, I am eagerly awaiting the arrival of a completed book to see the illustrations Peter Brown provides.  The cover (The cover reveal is at School Library Journal, A Fuse #8 Production, by Elizabeth Bird.) gives readers a huge hint.  Where is Roz and why is she there?  Let me simply say prepare to be on a roller coaster ride of emotions.


This title, The Wild Robot Escapes, written and illustrated by Peter Brown is, like the first title, a classic.  It addresses the issues of our interconnectedness with all animals, domestic and wild. It asks us to seek peaceful solutions to every question.  It promotes discussions on the part technology plays in our lives.  Think about the fact that with all the advancements available to those children, the storytelling with Roz was their favorite thing.  I can't imagine a professional or personal collection without several copies of this title.  It's spectacular!

To learn more about Peter Brown and his other work, please follow the link attached to his name to access his website.  I know you will enjoy this post by Peter dedicated to the work in creating this book.  At Little, Brown and Company, you can listen to a podcast where Peter talks about The Wild Robot Escapes.  Here is a link to a Book Club Guide for the first title.  Author, reviewer, and blogger at Seven Impossible Things Before Breakfast Julie Danielson writes about this book at Chapter 16.  Peter Brown is interviewed by songwriter and singer Emily Arrow at Musing, a laid-back lit journal.  Enjoy the audio book excerpt.