Life on a farm is not easy.  Regardless of the type of farm, there is an endless list of chores.  There is also a knack to performing each and every task.  These skills are perfected with practice and time . . . lots of time.  Each day begins and ends with a familiar rhythmic routine. 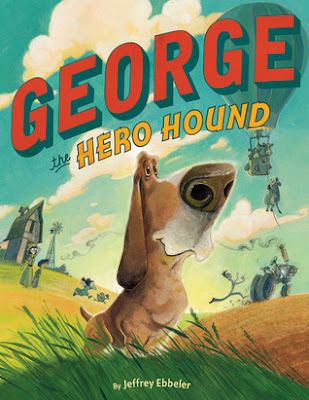 The land, buildings and home tend to pass from one generation to the next with the word retirement rarely spoken.  Farmers may not do as much as they get older but it's nearly impossible to take farming away from a farmer.  Of course, with that being said, there are exceptions.  George the Hero Hound (Two Lions, March 20, 2018) written and illustrated by Jeffrey Ebbeler follows a canine capable of unquestionable loyalty to a particular farm and all who reside there.

At the crack of dawn, and sometimes earlier, George followed Farmer Fritz helping keep the nearly dead tractor running and making sure the sneakier-than-sneaky cows did not escape into the corn field.  George loved all the work on the farm as long as he could take a much-deserved midday nap.  Life was good until Farmer Fritz decided to retire.  Dogs were not allowed where Farmer Fritz was to spend his days.  George was destined to stay on the farm.

Now, just in case, you may be wondering how George would survive alone, a new family, the Gladstones, arrived from the city.  George was readily accepted as a welcome part of the farm but they had no clue as to his name.  First on George's list of things to do was to help Mr. Gladstone fix the beat-up old tractor.  Unfortunately, Mr. Gladstone fixed it incorrectly.  There went the tractor!

Cows happily scattered with the tractor on the rampage.  Ever vigilant George kept them out of the corn field but tracked in a whole bunch of dust when he went to get a drink in the house.  Plumb pooped out George meandered toward his special space outside but something blue caught his attention.

Owen, the Gladstone son, had not been paying attention to Olive, the Gladstone younger daughter. It was up to George using the scent from her ribbon to find the little girl.  George was certain he could finally take his nap but an epic accident stopped all thoughts of rest.  Life on the farm was never going to be the same.


Like the first line in your favorite country western song, Jeffrey Ebbeler has penned a first sentence destined to having you humming a tune as you read the story.  The next thing you'll do, even if you are alone, is read it aloud.  The choice of words Jeffrey uses calls to mind life on a farm with extra attention to the humor in the variety of situations.  There are also speech bubbles with dialogue enhancing the narrative. These contain another bit of comedy as everyone seems to have a name for George except for the correct one.  Here is a passage.

Then Owen came running over.

I was supposed to be watching my baby sister, Olive.  Can you help me find her, boy?

George took a good sniff of Olive's ribbon---he was a hound dog, after all---and off they went.


When you read the title on the opened, matching dust jacket and book case, it's easy to see by his stance George looks the part of hero. (The title text is varnished.)  What you have to do is take a good second look at that image.  Notice Mrs. Gladstone and Owen, each looking in opposite directions.  Olive is chasing that poor chicken which she will not leave alone.  Mr. Gladstone is racing after the tractor with a mind of its own.  And take a look at those cows.  It looks like they've hatched another escape plan.

To the left, on the back, within a circle of white on a teal background the hero of the farm is standing with his new farmer friend.  This is one of the more hilarious nods to the American Gothic.  The opening and closing endpapers take the darker shade of teal from the front of the jacket and case as their canvas.

Rendered in acrylic, ink, and pencil on Fabriano hot press watercolor paper the pictures further generate laugh-out-loud moments on the title page with the clever cows climbing out from the loft window on the roof of the barn as George runs after Olive who is running after the frantic chicken.  The verso and first pages create another scene sure to bring on giggles as George and Farmer Fritz carry buckets to begin the daily chores.  (You won't believe what the cows are doing.)

Jeffrey Ebbeler shifts his image sizes to emphasize his story pacing.  Double pages change to single pages and then there might be two illustrations on one page.  You will find yourself stopping to notice all the details in every single visual.  There is usually more than one thing happening.  These details and the facial expressions on the characters increase the laughter.

One of my many favorite illustrations is one of two on a single page.  The story has Owen and George searching high and low for Olive.  In the second picture George is holding his nose high in the air as they cross a tiny stream on protruding rocks.  Owen is bent over on one of the rocks looking into the water.  Behind them in the woods a tent has been set up for camping.  Over a crackling fire two cows are toasting marshmallows.


Without a doubt George the Hero Hound written and illustrated by Jeffrey Ebbeler is certain to be a story time winner.  As all readers know shared laughter is better laughter and this story with its words and illustrations is jam-packed with humor.  You could use it for a theme on farm life, dogs or different kinds of heroes.  Be sure to place a copy of this title in your professional and personal collections.

To learn more about Jeffrey Ebbeler and his other work, please follow the link attached to his name.  More information can be found in this post at Writing and Illustrating, Kathleen Temean and at MBartists.  Enjoy the book trailer.

George The Hero Hound from Jeffrey Ebbeler on Vimeo.