There will be times during your life, hopefully not too often, when you feel completely out of place.  You are the proverbial square peg trying to fit in a round hole.  For whatever reason, those individuals around you, in this particular set of circumstances, are completely unlike you. 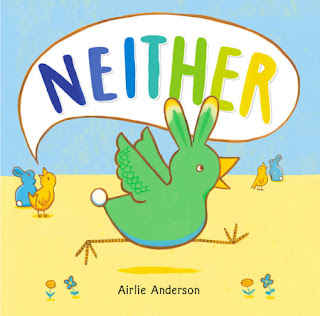 What can make this situation even more uncomfortable is when you want to be a part of the group but are excluded for your differences.  Neither (Little, Brown And Company, February 13, 2018) written and illustrated by Airlie Anderson is a tale of a newcomer.  As a novice the statements made by the current residents make no sense.

Once upon a time, there were two kinds:
this
and
that,
these
and
those,
one
or the other.

One day a green egg cracked and out popped a green being.  This individual, besides being mostly green among blue rabbits and golden, yellow-orange birds, was a combination of the two.  His body was like the birds' bodies except for rabbit ears and a white fluffy tail.  His legs were stripy too.  He did

He flew out of The Land of This and That until he was over a landscape of multiple colors made of many patterned shapes.  Talking with a purple kitten with butterfly wings and antennae he discovered he was in The Land of All.  There were blends of creatures of all colors!

They wanted him to join with them in their play.  He couldn't believe it, asking them if they were sure.  To them their differences made everything better.  In a gentle, surprising twist those who dwell in The Land of All joyfully embraced two unexpected arrivals.


The first sentence with the triple comparisons sets the stage with excellence for the arrival of someone or something which does not conform.  Airlie Anderson has fashioned her narrative for the youngest of readers with a theme impacting all ages.  It's an introduction to and a reminder to strive toward being our best selves.  And it reinforces the value in being an individual.  Here is a passage.


The first time you share the front of the dust jacket with readers they will be smitten with the green creature happily running from the left to the right.  The hues of blues, greens and yellow invite the reader into the story.  To the left, on the back of the dust jacket, our green guy has arrived in another land with six friendly faces welcoming him.  (I am working with an F & G.)

On the opening endpapers a repeating pattern of squares and rectangles in blue and yellow cover the two pages.  An array of circles, swirls, intertwined hatches, loops, a heart and stars in greens, pink, yellow, and orange are spread across the closing endpapers.  On the verso and title pages Airlie Anderson zooms in on the blue and yellow pattern taking us into The Land of This and That.  Round trees in blue and yellow cone-shaped trees alternate and line the pathway.

Rendered in gouache (opaque watercolor) on hot press watercolor paper Arlie Anderson continues with the theme of blue and yellow, adding more of this and that keeping the size of the landscape the same but increasing the volume of trees along the top edge.  For six pages this idea is reinforced until . . .

Now the images don't extend page edge to page edge.  The pacing changes with two illustrations to a page or single-page pictures.  The corners are rounded.  As the green bird/rabbit takes flight readers are treated to a lush two-page spread with one landscape blending into the other.  Readers will take note that images extending edge to edge or those with rounded corners have significance even after the welcome to The Land of All.

The facial expressions and body postures of the rabbits, birds and mixtures of animals reflect the current mood in each situation.  Careful readers will notice tiny details and slight differences before they are presented in the story.  If they look closely they will see hearts tucked into the illustrations.  You can literally spend hours looking at the next to last two page picture.

One of my many favorite images spans two pages.  We are brought close to the characters in The Land of All.  From left to right six, including the green bird/rabbit, stand in a row as close as they can to each other. The reply to the green guy's observation is a single word, each letter a different color.  In the background are the hills, their varied colors and patterns suggestive of pure delight.  Behind a bush elements hinting at a plot shift are peeking at the others.


If you are looking for a title for all ages showing the strength of individuality and the acceptance of that individuality by others, Neither written and illustrated by Airlie Anderson is the perfect title.  Even in the sadness of the green bird/rabbit's rejection by this and that you know hope is carrying the narrative forward.  This book will be requested over and over again for one-on-one story times or as a group read aloud.  You will want to have a copy for your personal and professional collections.

To learn more about Airlie Anderson and her other work, please visit her website and Tumblr account by following the links attached to her name.  You can also connect with Airlie on Twitter and on Instagram.  The visuals supplied at these sites are as uplifting as this title.