A Child Of The Wild

Canines, as their human companions can affirm, have a super sense of smell.  Their noses tend to assist them in avoiding dilemmas but can, when combined with curiosity, get them in less than desirable situations.  Emergency trips to the veterinarian to remove porcupine quills and more than normal cans of tomato juice in home pantries to combat skunk odor are evidence of inquisitiveness gone wrong. 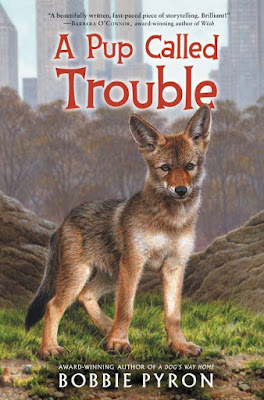 This desire to know beyond their normal day-to-day realm is not confined to dogs but is found in their relatives living in the wild.  A Pup Called Trouble (Katherine Tegen Books, an imprint of HarperCollinsPublishers, February 13, 2018), a new novel written by Bobbie Pyron, follows a coyote youngster that has an extra dose of curiosity coursing through his body.  He may have been the last of his siblings to be named but his antics and over-zealous desire for adventure spell trouble.

1
Eyes Wide Open
On an early spring day, in a den tucked beneath the roots of an old oak tree, four coyote pups were born.
During the first week, they nursed and slept just like all newborn puppies do.
All except one.

As the weeks passed this pup got himself into one difficulty after another but his interest in humans, called the Makers by the Singing Creek Pack of the Coyote Clan, proved to be a serious mistake. With the confidence of youth, Trouble figured watching the farm and home of the Makers and the Beast's (their truck) daily trips he knew everything he needed to know to put an idea into motion.  One morning before the rest of his family was awake; he left the den, traveled to the farm and hopped into the back of the Maker's Beast.  What Trouble did not know was the truck filled with produce and eggs was on its way to a farmers' market. . . in New York City.

His arrival and discovery at the farmers' market left him shaken to his core and running loose in a space more foreign than he ever imagined.  Every place he looked there were towers of stone and little sky.  He was hungry and frightened.  And he caught the attention of a crow known by the Furred and Feathered as Mischief.

In short order Mischief lived up to his name enjoying every wild moment Trouble caused among the Makers in a particular office building and a subway car. On the train a specific opossum named Rosebud was failing miserably at being brave.  How would she survive being trapped inside the rocking train with a coyote?  And what was a crow doing here, too?

Taking up residence in Central Park Trouble's life took on a routine of discovery, close encounters and nighttime conversations and play.  Mischief and Rosebud were his companions but others, a fox and an owl, soon joined the group.  A poodle named Minette and her poet human enlarged Trouble's circle as did one small human, a nature lover, named Amelia.

While Trouble seemed to be unconcerned, his cityborn friends knew disaster was a dark cloud looming over the pup, ready to burst at any time.  Officer Vetch of the Greater Manhattan Animal Control and Care was determined to capture Trouble and Trouble's status in the man's mind had changed.  In what can only be described as an action-packed, life or death scenario, a foiled plan and convergence of characters take readers toward a true hold-your-breath conclusion.  Look toward the North Star.


From the beginning with each short, descriptive chapter Bobbie Pyron builds her narrative with wit, humor and mounting tension.  The premise of curiosity over caution is one in which readers can easily identify.  The commentary of the characters and the situations in which Trouble finds himself will have you smiling and laughing out loud but underlying both the curiosity and humor Trouble's inexperience places him in increasingly dangerous situations.

Each chapter end leads flawlessly to the next chapter with sentences which heighten our own curiosity as new elements in the plot and characters are introduced. Bobbie Pyron has a gift for enveloping readers in the surroundings of her stories with her choice of words.  Her knowledge of the animals is evident in the realistic situations portrayed.  Here are a few of the many passages I tagged.

He could just make out the sleeping forms of his mother and father lying close together beneath the wide branches of an evergreen tree.  And there, beneath a rock outcropping, slept Twist.  His chin rested on the strip of deer hide he and Trouble had played with the night before.
For one heartbeat Trouble questioned what he was about to do.  Oh, how he loved his family and the den and the ancient oak and the meadow and the creek.

"Well, well, well, if it isn't a member of the Coyote Clan," the crow said.  "This ought to be rich."
Mischief watched with delight as the humans shouted and waved their arms and ran about like panic-stricken pigeons as they were prone to do when faced with something unfamiliar.

Rosebud realized through her keen sense of smell that this was a human.  Her heart pounded.  Her blood froze.  She could feel a faint coming on.
Although Rosebud was not the bravest of creatures, she was practical.  She decided the best course of action was to assure this human that 1) she was not a threat, and 2) she was not a rat.
Rosebud stood on her hind legs, pulled back her lips in an enormous smile, revealing all fifty of her gloriously sharp teeth.
Without a sound, Verla Trumpowski fainted onto the floor.
Mischief croaked in disbelief.  "How did that beady-eyed little thing do that?"

"I think," he said carefully, "that sometimes you have to take risks to see something beautiful."
Finally, the moon rose.  Trouble watched it slowly climb, not above the jagged tops of trees like at home, but above the jagged New York City skyline in the distance.


Without a doubt A Pup Called Trouble written by Bobbie Pyron is going pass from reader to reader wearing a well-loved look in no time at all.  Readers can't help but be captivated by the adventuresome episodes of Trouble and the cast of characters.  The manner in which Bobbie Pyron weaves them all together is pure storytelling enchantment.  I highly recommend this title for your professional and personal bookshelves.  At the close of the book, Bobbie provides six pages of Critter Notes on coyotes, crows and opossums.

To learn more about Bobbie Pyron and her other work please visit her website by following the link attached to her name.  (If you have not read her The Dogs of Winter or A Dog's Way Home, remedy that as soon as you can.)  At the publisher's website you can read a sample or listen to a sample of the audio.  At Coyote Yipps Bobbie Pyron talks about her inspiration for this title.
Posted by Xena's Mom at 9:29 AM