Once the words fairy tale are uttered an aura of magic and mystery fills the place.  If others are present, without being aware, they move in closer to the speaker.  Even though the particular story selected may be as familiar as our own faces in the mirror in the morning, we still listen as if we are hearing it for the very first time. 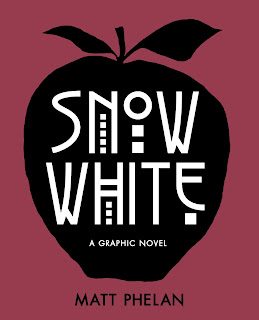 Fairy tales have distinctive goodness in them working to overcome blatant evil.  They are not without supreme difficulties but we know there will be a happily ever after.  Author illustrator Matt Phelan, highly respected for his body of work, especially his graphic novels, brings to readers a haunting rendition of one of the most well-known fairy tales.  Snow White: A Graphic Novel (Candlewick Press, September 13, 2016) written and illustrated by Matt Phelan is remarkable for the brilliance of the artwork, setting and narrative.

The story opens with a beautiful young woman lying in a sleigh in a store-front window.  NYPD crime scene tape ropes off the area.  A police detective asks a crying youth:

What's the story here?
Who is she?

He replies:
White as snow...

By the attire worn by the characters, you know this story is taking place in the not-too-distant past.   With a page turn your curiosity is satisfied with the words

A little girl, Samantha White, is playing in the snow as her mother strolls along with her but the happy day turns tragic when the woman begins to cough blood.  She passes away shortly thereafter.  Ten years later, Mr. White reads a newspaper article about a hit performer at the Follies.  He is mesmerized by her performance.

Her new stepmother, the Ziegfeld Queen, has Samantha sent away to boarding school.  Back at home Mr. White seems to have survived the market crash but cannot survive the evil wishes and jealousies of his new wife.  At the reading of Mr. White's will his wife is shocked by an amendment leaving the bulk of the estate to Snow White.

A man is hired to kill Snow White but after chasing her in and through Hooverville, he warns her to never go home again.  This man visits a butcher hoping to convince the stepmother the deed is completed.  Snow White finds her way back to the city only to be nearly attacked by two villains in an alley. She is saved by seven boys who live on the streets.

That night Snow White takes the boys to Macy's department store to show them the winter window display, hoping to help them believe there is beauty everywhere.  This is a mistake.  Another mistake is made the next morning.

In a state of shock, sadness and anger, the seven give chase and watch as fate attempts to balance the scales.  Remembering Snow White's first love shared with them, they proceed, with heavy hearts, to carry out their plan.  A detective gets the surprise of his life.  Seven boys finally believe in the power of snow.


Within eighteen chapters Matt Phelan writes a minimal amount of text, the majority of it dialogue.  This presents pivotal points of the plot in more specific detail but allows for the atmospheric images to carry the story.  One highly ingenious twist on tradition is the use of ticker tape instead of a mirror on the wall.  This is no ordinary machine but one filled with malice printing out truth and suggestions to the wicked Mrs. White.  Here's some of the dialogue during the evening with the seven boys.

You're far from the country now, sister.
The same snow falls here.
Hmmph.
This city is beautiful, too.
It has its own magic.
Come on.
I'll show you.
Ain't you scared?  Someone's after you!
Scared?  Of course not.  I have seven brave protectors.


As soon as you open the matching dust jacket and book case you know this Snow White is going to be different.  The image from the left, the back, carries over the spine.  It's a night silhouette of the city skyline.  In the center of the darkness is a picture of the seven boys with a quote from the book.  In the black of the spine the title text and font are replicated.  The opening and closing endpapers are lighter as you get closer to the body of the book, moving toward dark gray on the outside edges.

After the chapter headings pages, a single picture of the face of Snow White in repose is shown.  We move seamlessly from the story's present, to the past, and moving again to the present. Matt Phelan alters his panel sizes to supply the narrative's pacing.

Rendered in pencil, ink, and watercolor with digital adjustments fairly wide margins of white frame each picture.  The details, specifically those depicting an emotional moment, are intensely real.  You will feel your breath catch at some of his close-up pictures.  Phelan's use of light, dark and shadows is masterful.

One of my many favorite pictures is at the beginning.  It's when the detective is speaking with one of the seven boys.  It is a single page picture of the boy crying.  We have zoomed in to his teary face.  A ball cap is off to the side on his head.  A striped scarf is wound around his neck. His head is slightly down and his eyes are closed as two large tears slide down his face.  He utters the classic phrase.


Snow White: A Graphic Novel written and illustrated by Matt Phelan has been named by School Library Journal as one of the Top 10 Graphic Novels | 2016.  Every time you read it you can understand why it received this designation.  Every time you read it, you discover another detail which enriches the telling.  This book should be on every professional and personal bookshelf.

To learn more about Matt Phelan and his other work you can visit his website and blog by following the links attached to his name.  At the publisher's website you can get a peek inside the book; more than forty pages.  At Candlewick Press there is a discussion guide and author's notes about this title.  Be sure to visit Watch. Connect. Read. the blog of John Schumacher, Scholastic's Ambassador of School Libraries, for the book trailer premiere.  It gives you a real sense of the time and place of this version.  There are more teaching ideas for this book at School Library Journal's Inside 'The Classroom Bookshelf'.  This title is discussed with Matt at The Beat Comics Culture and The Comics Alternative for Young Readers.
Posted by Xena's Mom at 9:43 PM