Walk With Purpose And Always Look To See

TO
ANYONE WHO IS HAVING A BAD DAY

Reading a dedication such as this lets you know you are holding hope in your hands.  We all have waking hours we would like to fast forward or rewind; some of them worse than others.  Knowing everyone has these moments binds us together as members of the human race.  If we are fortunate one or more will reach out a helping hand. 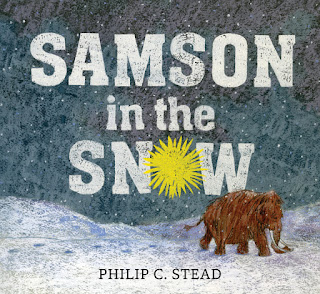 When you read titles such as A Home for Bird, Bear Has a Story to Tell, Hello, My Name is Ruby, Sebastian and the Balloon, and Lenny & Lucy each focusing on compassion and friendship, each written by the same author as the dedication shown above, you know his newest title will give you those very same things.  It will encourage you to look at your world with intention.  Samson in the Snow (A Neal Porter Book, Roaring Brook Press, September 27, 2016) written and illustrated by Philip C. Stead is a gentle story wrapped in a timeless truth.

Samson has a dandelion patch, caring for it like a master gardener.  He is also waiting; patiently waiting for a friend.  On a sunny morning a small red bird stops to chat with Samson.  A request is made.

Without giving it a second thought, Samson selects some of his finest blossoms for the red bird to take to a friend who is having a bad day.  The bird explains the friend's favorite color is yellow.  It's Samson's favorite color too.  Seeing the red bird soar across the sky Samson thinks about having a friend.  Before he knew it, he falls into a sound sleep.

As Samson sleeps, a sneaky storm pushes the sunny day away changing the yellow of the dandelion patch and Samson's yellow dream to white.  This wakes him up.  When he sees all the white his first thought is of the little red bird.  It worries him so he, wishing for a friend, goes in search of one seeking their friend.

Samson plods over all sorts of terrain covered in deep, blowing snow. As he moves along he nearly steps on a mouse that is grateful for a ride within his furry coat.  They realize they are both looking for someone small who might be in trouble in this storm.  Samson grows weary so they rest right next to something looking a little out of place in all this white.  When you look for the right reasons, friendship finds a way.

Through his masterful use of language Philip C. Stead creates an atmosphere which asks us to pause and reflect.  We are sharing the experience with his characters.  We are intimately aware of the innate capacity within them to be kind first.  Without telling us outright Stead's narrative and conversations between the characters weave around us the wisdom of The Golden Rule.  Here is a passage.

Samson trudged through valleys and over rolling hills.  The wind blew the snow into fantastic shapes---but Samson did not stop to look.
"The little red bird is not made for this kind of weather," he thought.

Moving from left to right, back to front, the opened dust jacket is a before and during look at this story.  In the first Samson is walking off the left portion of the back with the little red bird flying near him. The day is sunny and the field is filled with dandelions.  On the right the hill continues but is now covered in snow with Samson walking in the opposite direction.  The title text is raised.

The book case takes one of the grays from the storm using it as the background color.  On the front a single large snowflake appears to have been stenciled.  In the center is a tiny woolly mammoth.  The opening and closing endpapers are done in a lighter, almost silver, gray.  The same image on the case appears in pale green before the title page.  The text on the title page is dandelion yellow with the o in snow a tiny pale green snowflake.  Several small snowflakes are placed on the verso.

the illustrations span either a single page or across two pages.  The texture in these images is stunning.  Prior to the snowstorm small dandelions are placed on the text pages.  After the storm snowflakes take their place.

Stead alters his perspectives to completely bind readers to the story.  When he brings you close to the characters you are connected in that minute.  When we are given a grander view we realize the extent of the commitment of each.  Nothing is going to keep them from doing what they believe is right.

One of my favorite illustrations is on a single page in the beginning.  We are looking at the little red bird as if we are the woolly mammoth.  The small friend is looking up, tail feathers fanned behind. Surrounding the little red bird are dandelion tops with leaves reaching out like arms.  The dandelions are nearly the same size as the bird.

Samson in the Snow written and illustrated by Philip C. Stead is a moving, marvelous tale of friendship.  It softly surrounds you.  It is the kind of story you want to share repeatedly. This book is a gem; like finding dandelions in a snow storm.

To learn more about Philip C. Stead and his other work please follow the link attached to his name to access his website.  There is also a website dedicated to the work of Philip C. Stead and his wife, Erin E. Stead.  Several interior pages are available for you to view at the publisher's website.  Erin and Phil were interviewed at Twenty By Jenny in April of this year.