Heading home today after sharing thanks and food with friends and their family, my co-pilot, my furry friend perched on the compartment between the front seats like a figurehead on a ship, and I observed in the twilight the signs of the upcoming holiday.  Lighted garlands are wrapped around lamp posts in local communities.  A large green tractor is completely covered in white lights as it sits on the lawn in front of the John Deere building.  Here and there some homes are already brightly decorated with twinkling rainbow lights.  One such home looks like it should join in the feud from the Deck the Halls movie. 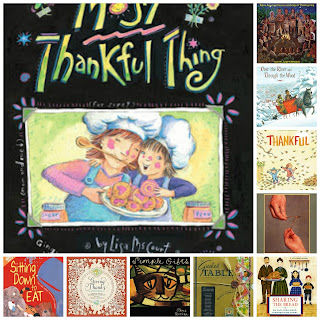 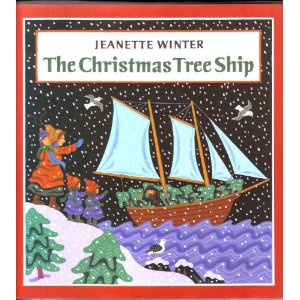 The Christmas Tree Ship (Philomel Books, October 6, 1994) written and illustrated by Jeanette Winter is based upon the true story of Captain Herman Schuenemann.  This man used his fishing schooner, the Rouse Simmons, to deliver evergreen trees from the Upper Peninsula of Michigan to Chicago beginning in 1887.  For twenty-five years he set sail from Thompson to deliver Christmas joy to waiting people on the other side of Lake Michigan.

He and his crew and his wife and three daughters worked cutting trees and loading them on the ship.  As his family waved goodbye the Captain sailed over the frigid waters.  He loved sailing with his ship loaded with trees.  People were always excited when The Christmas Tree Ship moved up the Chicago River to the Clark Street Bridge.

These trees made their way into homes announcing the festivities to come.  On the other side of the lake, a wife and three daughters waited.  The following year snow fell as the trees were cut and taken to the ship.  It was still falling as the vessel set sail.

Out on the lake the snowfall became a blizzard of white, waves and wind.  The Christmas Tree Ship never arrived at the Clark Street Bridge.  A spruce tree was snagged in a fisherman's net.  A bottle washed upon a shore in Wisconsin with a note from Captain Herman.  When November came the next year a wife and three daughters continued the work of a husband and a father.


Jeanette Winter follows the facts closely in her interpretation of this story.  She does change some of the names but the soul and heart of the tale remains true.  When you read her words it's like listening to the storyteller reveal the magic of a legend.  Here are several passages.

Friendly gulls stayed close as The Christmas Tree Ship made its way down the icy waters of the winter lake.
Night fell, snowflakes fell, like stars falling all around.
Night on the lake was the captain's favorite time.


The matching dust jacket and book case immediately call out to the reader welcoming them with the familiar signature style of Jeanette Winter.  For those unaware of the story questions begin to form.  Who is this man?  Who are the woman and the three girls?  Why is he sailing in the winter?  To the left, on the back, six spruce trees are placed in a snowy square of purple against a dark green canvas.  The opening and closing endpapers are a rich red.  Beneath the text on the title page in a square is a small boat carrying a single upright tree.

For every page turn Jeanette Winter has given readers a single, framed image.  Her attention to detail is remarkable.  These pictures are like looking at pieces of Americana.  She alters her perspective giving us close-up views of the characters or panoramic views of the lake or city.

One of my many favorite illustrations is of the arrival of the ship in Chicago.  We are looking down at the scene as if we are a bird.  On either side of the river buildings stand tall, smoke billowing from the stacks.  Bridges cross from side to side as the ship slowly moves toward its destination. 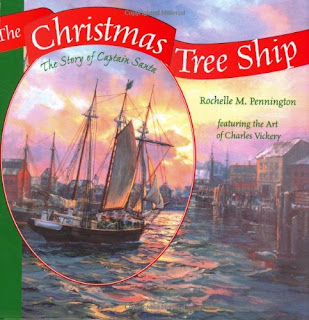 The Christmas Tree Ship: The Story of Captain Santa (The Guest Cottage, Inc., November 2002) written by Rochelle M. Pennington with paintings by Charles Vickery begins in 1912, the final November Captain Schuenemann would sail. The captain knew winter was coming quickly and he had to hurry to make this final delivery of the year.  He had been doing this for more than two decades, selling his trees right from his ship.  For those who could not afford his trees or to charities, he gave the trees away for free.  His generosity earned him the name of Captain Santa.

Every year the captain's wife would ask the same question and every year he gave the same answer.  This year the forty-four year old ship was as loaded as ever when the Captain's voice rang out,

The captain loved to sail.  He loved Christmas.  He loved delivering these trees.

The captain knew he was in trouble when he saw the darkening sky.  The storm came fast and hard with bone-chilling temperatures and fearsome waves.  In Kewaunee, Wisconsin his distress call was picked up by the United States Lifesaving Station.

A crew from Two Rivers headed out to help.  They saw the Rouse Simmons but when they looked again it was gone.  It was two weeks and six days before the corked bottle was found.  (It wasn't until 1971 before the ship was discovered by a diver.  Christmas trees were still tied to the deck.)  But that was not the end of The Christmas Tree Ship in 1912 for the captain's wife Barbara and their daughters continued the tradition for another twenty-one years bringing trees from Michigan to Chicago.

Rochelle M. Pennington spins a tale of a big-hearted man (and his family) using research and poetic language.  She creates an atmosphere with her words taking us into the exact moment.  Many of the passages (I believe) are a reflection of her faith.  Here is a passage.

Then the captain saw it.  It was the one sight he loved more than any other when he was out to sea, this very sight, the sight of seemingly being able to see forever across endless waters and an endless horizon.

Somewhere out there Chicago lay.  The captain knew it.  But for now, it appeared not to be so.  For now, it looked as if he and his ship, with its sails raised high, could sail on forever into infinity.  He embraced the sight with his arms spread wide across the width of the wheel he worked before him.  Sail on, Captain, sail on.


Traditional, classic paintings by Charles Vickery of the schooner's arrival in Chicago and the schooner on the lake grace the front and back of the matching dust jacket and book case.  The use of light and shadow is stunning here and throughout the book.  Exquisite fine lines bring a photographic reality to the illustrations.  A sea green covers the opening and closing endpapers.

Most of the images span a single page opposite the narrative, with some crossing the gutter.  Original photographs are included with captions when appropriate.  They are placed on top of a painted background.

One of my favorite illustrations is of the arrival of The Christmas Tree Ship at the dock in Chicago.  Buildings and other ships on the river provide a background.  The sails on the ship are closed and tied.  Trees are stacked on the deck.  Other trees are being unloaded on carts or sold on the dock.  People are standing in the snow watching.

The Christmas Tree Ship written and illustrated by Jeanette Winter and The Christmas Tree Ship: The Story of Captain Santa written by Rochelle M. Pennington with paintings by Charles Vickery keep alive the memorable story of the work of one man and the work of his wife and daughters.  Their benevolent spirits live in the pages of these books.  Jeanette Winter does include a note at the beginning of her book.

To learn more about Rochelle M. Pennington and Charles Vickery please visit their websites by following the links attached to their names.  Jeanette Winter is interviewed at A Mighty Girl in 2013.  I believe you will enjoy reading The Story of Chicago's Christmas Tree Ship, December 24, 2013 and The Christmas Tree Ship in the National Archives.
Posted by Xena's Mom at 9:22 PM