Have you ever heard something wondering what it could be?  From wondering your mind goes to possibilities.  If the noise is repeated possibilities leap to certainty.  This conviction as to the source can trigger emotional responses; laughter, happiness, unease, fear, sadness, astonishment, or inquisitiveness. 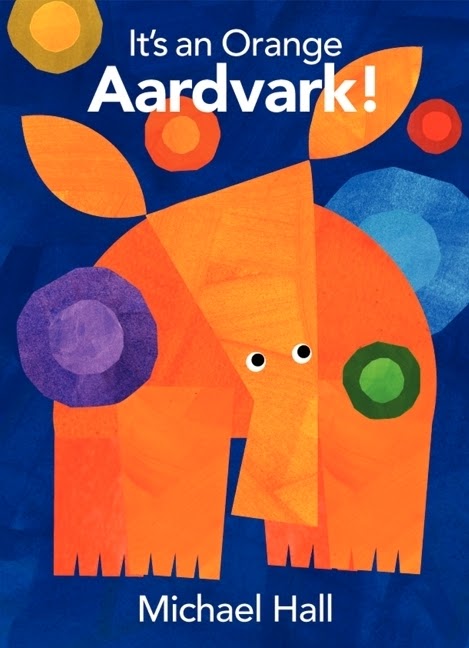 There is great power in imagination.  It's an Orange Aardvark! (Greenwillow Books, an imprint of HarperCollinsPublishers) written and illustrated by Michael Hall chronicles five carpenter ants who are trying to determine the cause of a singular sound.  Among the quintet opinions range from positive to negative and everything in-between.

Following this speculation the silence is broken.  One of the more adventurous ants is making a hole in their home, a stump.  The need to see outside is strong; curiosity is not going to kill this cat...er...ant.

Several of the other residents give replies in support of his endeavor.  One does not.  This particular ant is the exact opposite of the window maker.  This particular ant is certain an aardvark is lurking outside ready to gobble them up as an entree.  The three, who earlier liked the idea of an exterior view, switch sides backing the prophet of doom.

When the luminous color of orange gleams through the opening, the naysayer is positive it's an aardvark.  With sure knowledge he proclaims

Aardvarks turn orange when they're hungry for ants, you know.

Not to be deterred in his quest, the industrious insect constructs another cranny.

Into this latest peephole a brilliant blue fills the space.  You-know-who has an answer ready; still convinced an aardvark is watching and waiting.  In his description not only does the aardvark alter skin tones when desiring dinner but wears bedtime attire at the same time.

As the bold bug continues boring through the wood, six holes expose six different hues.  The contrary character never shifts his opinion as each shade shines; not even when the four discover the radiant truth.  Who knew aardvarks like grape juice?


Lively language forms a rhythm at each page turn.  Michael Hall assigns responses to each of his animated ants; one likens the colors to another thing, another gives one word descriptive reactions, a third keeps adding shades to his answers as the fourth envisions their worst nightmare.  Repetition of three exclamations after each gloomy guess, adds to the participatory fun of this cumulative tale.  Here is one passage.

Thunk!
Ah! It's orange and blue.
Blue like the ocean.
Cool!
Oh no, no!
It's worse than I thought.
It's an orange aardvark and ...


The entertainment begins when readers first glance at the matching dust jacket and book case.  Michael Hall's bold palette, not to mention the orange aardvark, is certainly eye-catching.  On the back the insects wearing construction hats feature the trio of repeaters along with the spunky craftsman.  Compiled digitally using acrylic-painted textures and torn paper, the illustrations begin the story four pages prior to the title page.

Each time a hole is made in the text, a hole appears on the page aligned with a new color.  The personalities of each ant pop off the page as their eyes, mouths and legs change.  Readers will be unable to contain their laughter as the persistent pessimist adds to his perception of the perceived adversary outside.  Hall's layout and design with his combined colors are marvelous.

One of my favorite illustrations is the two-page spread of five colors revealed.  Four ants are on the left with four holes cut away.  The productive ant is on the right amid five circles of shaded color with five holes.  Even with the one ant beginning his warning, this page is filled with exuberance.  You can feel something good is about to happen.


Cheerful and charming, It's an Orange Aardvark! written and illustrated by Michael Hall is one of those books that are pure delight from cover to cover.  I can already imagine reading it aloud speaking in a particular voice for each ant.  I can already hear listeners requesting it again and again.  I can already picture early readers sharing it with younger friends and siblings.  This book is a treasure.