Family vacation memories are full of the ongoing battle of my Dad versus the raccoons.  Ingenious designs, guaranteed fool-proof contraptions were no match for the hands and minds of these nighttime marauders.  We laughed ourselves silly as we watched evening after evening. 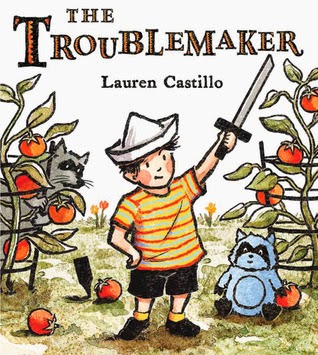 From time to time humans have been known to replicate certain skills exhibited by these bandits from the wild.  In her newest title, The Troublemaker (Clarion Books, an imprint of Houghton Mifflin Harcourt), author illustrator Lauren Castillo tells a turnabout tale bursting with humor. A brother has met his match.

I was bored.
Everyone else had something to do.

In conversation with his toy raccoon, Rascal, a boy decides the best thing to do is play a game of pirates.  Exhibiting well-known characteristics of these buccaneers is imperative to a successful adventure.  The appropriate accessories are a necessity.  As a final key element, a hostage is essential.

Of course, this boy pilfers many items from his nearby younger sister, blissfully holding a tea party on the lawn.  His effort to send her stuffed bunny out to sea doesn't go as planned.  When the bunny disappears again, the boy is quickly accused of thievery.

His reply of innocence is not trusted.  Confined to the garden by his mother, he and Rascal gather tomatoes to place in his boat.  In a flash Rascal, the boy's boat and paper sailor hat vanish.

Dusk settles over the scene with the boy wanting to find his beloved friend.  Bedtime is lonely for both siblings.  Morning brings a chilly surprise to the boy.  A crafty culprit needs to be caught.  One lesson may have been learned but there is no changing a career criminal.


By using the brother as narrator Lauren Castillo warmly welcomes readers into the story.  Simple sentence structure and easily understood word choices allow us to view the world through his thoughts and speech.  What Castillo chooses to say in her text adds to the comic contrast with the illustrations.


Setting the boy garbed in his pirate gear, Rascal at the ready, with the real raccoon peering at them from the safety of a tomato plant prepares readers for certain hilarity.  On the back of the dust jacket a smaller oval illustration is set in a darker background.  The head of the masked scamp looks directly at the reader over the top of a basket of tomatoes.  Beneath the jacket the book case in a rich vegetable red features the black outline of the raccoon watching, to the right, someone or something unseen to us.  Opening and closing endpapers are patterned in a black and white diamond motif; a single tomato centered in the white space.

On the title page Lauren Castillo has pictured the two toys, the bunny and Rascal, sitting side by side in the grass.  She begins her story on the verso and dedication pages with the raccoon anticipating his next adventure.  Using pen and ink with acetone transfer, assembled digitally, Castillo's artwork broadens the meaning of the text.

Her heavier black lines add emphasis to the color palette and details of her visuals.  Shifting the size and shape of her illustrations increases interest.  To depict some of the story's moments as silhouettes is brilliant.

One of my favorite illustrations is the close-up of the sleeping raccoon in the tree outside the boy's bedroom window.  Draped in the missing blanket, cuddling the two beloved stuffed animals in each arm, nestled in the boy's boat with his two toy dinosaurs nearby is laugh-out-loud funny.  Even though the raccoon is the real rascal, you can't help but feel empathy.  This is one of those both aha and aw pictures.


Lauren Castillo has given readers true wealth in The Troublemaker.  It can be read as a humorous story, a tale of understanding between brothers and sisters and an honest depiction of the maneuverings of the notorious wily raccoon.  This is destined to be a favorite among the intended audience and those of us fortunate to read it to the bedtime or story hour crowd.  I can't stop smiling when I think about it.


Excited to see The Troublemaker in this @HornBook article about sassy siblings! http://t.co/DxRV3Zebwl @HMHKids
— Lauren Castillo (@studiocastillo) May 21, 2014