I daresay that at one time or another each of us has felt like a square peg in a round hole.  Sometimes this can be a very good thing. (I'm talking about all those incidents my Dad said, "If everyone jumps off a cliff, are you going to jump too?") Not following the crowd or fitting in at the moment was a smart decision.  On the flip side standing out in a crowd, being different, is hard work, being brave over and over.  The rewards may be little or difficult to find now and then. 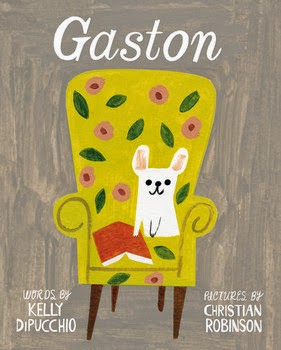 A new title, Gaston (Atheneum Books for Young Readers, an imprint of Simon & Schuster Children's Publishing Division, June 3, 2014) with words by Kelly DiPucchio and pictures by Christian Robinson follows a pooch with plans and a purpose.  Little does he or Mrs. Poodle know of the shock spring will bring.  Let's begin at the beginning.

Puppies, all puppies, are precious so Gaston was as warmly loved as his three siblings. Even the least observant reader will notice a discrepancy before they are introduced a second time. When the newest family members began to grow Gaston was considerably larger than the other three.

Gaston worked as hard as he could when life lessons began in earnest; sip not slobber, yip not yap and tip toe not run.  He really tried his best.  Anyone who saw him would see one happy dog.

On their first visit to the park in the spring Mrs. Poodle led her pups with pride.  So did Mrs. Bulldog.  It was clear when comparing the two sets of four that something was not quite right.  The names of the little bulldogs were Rocky, Ricky, Bruno and Antoinette.  It seemed a switch had been made.

The moms agreed to let their children make the decision.  After much fun and frolic, the two sets of four looked perfectly proper; Mrs. Poodle had four poodles and Mrs. Bulldog had four bulldogs.  We readers know just because something looks good does necessarily mean it is good.

Antoinette did not sip, yip or tip toe like her new sisters did.  Gaston did sip, yip and tip toe but his new brothers did not.  Certain parties raced to the park the next morning.  There was no fun or frolic but fast actions fashioned a new future for the two foursomes.


When you read some books for the first time, then the second and third times, it's impossible not to do so without reading it aloud in your mind.  The narrative, the words, demands it of you.  The combinations are playful and musical.  Kelly DiPucchio has done this with her story Gaston.

When readers are introduced to Mrs. Poodle's and Mrs. Bulldog's puppies she has us read their names but then she says,

DiPucchio wants us to be active participants in this tale.  There is light humor throughout comparing Gaston to his sisters, as well as having Antoinette prefer to remain with her bulldog brothers.  Many of her phrases rhyme or use alliteration to enhance the cadence of her telling.  Here is a single sample.


You simply have to touch the dust jacket and book case created by Christian Robinson.  The brush strokes on both, as well as all the illustrations rendered using acrylic paint, are an open invitation.  You see the texture, and then you want to feel it.  On the dust jacket many of the elements are raised like embossing.  Children love to run their hands over these types of illustrations. (So do I.)  The pattern on the chair where Gaston is seated appears on the opening and closing endpapers.  The back of the jacket and case show Mrs. Poodle looking at her pups all in a row with their backs to the reader.  You have to smile at the difference between Gaston and his sisters.

There is definite foreshadowing in the opening two page picture across the verso and title page as a doctor wheels out a carriage with a poodle riding in it and as a bulldog peers out the top of a box in the corner.  Robinson varies his visual sizes to elevate the story; two page and single page spreads, edge to edge, or single pages with large white space loosely framing a rectangle.  There is a distinct warmth and charm to his choice of colors; more muted and earth tone.  His dogs are as cute as cute can be.

One of my favorite illustrations is in the living room of the home where Mrs. Poodle and her family reside.  On the wall is a framed poodle picture.  Gaston's chair is in the corner next to Mrs. Poodle in the center, sitting all prim and proper.  The three little poodles with Gaston on the right end are sitting in a row in front of her.  This visual with the text makes me burst out laughing every single time.


Knowing where you truly belong is at the heart of Gaston written by Kelly DiPucchio with illustrations by Christian Robinson.  Comfort comes from within.  This winsome title is an absolute treasure.

If you want to know more about Kelly DiPucchio and Christian Robinson please follow the links embedded in their names to access their websites. UPDATE Julie Danielson at Seven Impossible Things Before Breakfast has lots of art from this title and other dog titles in a post.
Posted by Xena's Mom at 12:27 AM