There is an art to discovering, creating and enhancing art...at least for me.  I have found that in slowing down, in stillness, I have been able to develop a more sensory appreciation for nearly everything.  I think you have to step away from, step outside, the normal hustle and bustle around you.

When you stand on the shore of Lake Michigan all alone and close your eyes, the sound of the waves becomes a string of notes reaching into your soul.  When you block out all sound and gaze at the star-studded sky, it lifts you up.  Have you ever reached out and touched a milkweed pod broken open with the seeds spilling out, feeling the different textures?  When cooking and then eating a favorite recipe, sometimes it's difficult to determine where taste ends and smell starts; the two are nearly blended together. 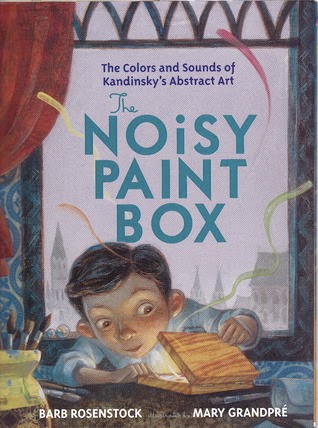 What I have never been able to do is to see color when hearing sounds or to hear sounds when seeing color.  Artist Vasily Kandinsky could.  The Noisy Paint Box: The Colors and Sounds of Kandinsky's Abstract Art (Alfred A. Knopf) written by Barb Rosenstock with illustrations by Mary GrandPre traces his creative life from his youth into adulthood.

Vasya Kandinsky spent his days learning to be a proper Russian boy.
He studied bookfuls of math, science, and history.

It was a subject necessary for a good and decent upbringing; an appreciation for art was integral to him becoming well-rounded.  After a lesson in mixing the colors from his aunt, he tried it on his own.

The results of his efforts puzzled everyone.  They failed to understand what his work represented.  Vasya was asked to attend classes so he could paint exactly as everyone else did.  When he grew older he attended law school, setting aside his box of paints.

Even though his box was closed, colors still rang out to him wherever he went.  One evening the most astonishing thing happened; at the opera Vasya saw colors as the orchestra played.  His career in law no longer held any importance but becoming a painter did.

He studied and painted conforming to the instructions of his mentors.  These pictures were not a reflection of the sounds he heard.  Vasya could no longer ignore the music coming from his noisy paint box.  He mixed and painted and people began to listen.


When you look at a Vasily Kandinsky painting, a unique energy emanates.  That same type of vitality calls out from the narrative with Barb Rosenstock's use of language.  Details reflect her meticulous research but her depiction of them is completely captivating for readers.  When she describes Kandinsky's abilities the air around you will resonate in joyful colors.  Here is a sample passage.

As the orchestra's music crashed around him, the colors of the noisy paint box twirled wildly in his mind.  Stomping lines of vermilion and coral.  Caroling triangles in pistachio and garnet. Thundering arches of aqua and ebony, with shrill points of cobalt and saffron.


You can almost reach out and touch the magic in the air from looking at the matching dust jacket and book case illustration extending over the front and back.  Mary GrandPre uses acrylic paint and collage to make this and the other pictures in this title; most spanning two pages.  A thin white line frames those and the eight single-page visuals.  The opening and closing endpapers are done in a collage of creams and a paler shade of one of the brush strokes of color pattered on them; the red, blue, green and yellow.  The final set of endpapers includes a quote of Vasily Kandinsky done in script.

The title page is a close-up view of the interior of the paint box; the text cleverly positioned as if it's supposed to be there.  With a page turn the story begins with a scene of Vasya in his room studying.  Displayed items mirror the words (with the exception of his stuffed toy rabbit).  There is an authenticity to the architecture, decor, furniture and clothing of the era in every scene.

Mary GrandPre chooses a color palette that brings the hues from Kandinsky's artwork into her illustrations with an overtone of shades of blue (almost like a base).  Her lively paintings move with a vibrancy perhaps due to her lighting, lines and layout.  My favorites, by far, are the close-ups of Vasya's face over the years as he senses colors in sounds and hears sounds in color; as a boy mixing his paints for the first time or as a young man walking down a city street or sitting at the opera house during a performance.


This picture book presentation, The Noisy Paint Box: The Colors and Sounds of Kandinsky's Abstract Art written by Barb Rosenstock with illustrations by Mary GrandPre, of Vasily Kandinsky's life is exuberant, informative and engaging.  It shines a light on one man's individuality, on his desire and determination to follow his heart.  You might want to have several paint box sets on hand after you read this book.  I know it will inspire others to do the same.  The outstanding illustrations of Mary GrandPre make this title a candidate for the Mock Caldecott 2015 list.

At the conclusion of the book are an author's note, four of Kandinsky's paintings, and a list of sources. The links embedded in Barb Rosenstock's and Mary GrandPre's names will lead to their official websites.  I urge you to visit them.  Please follow this link to an interview of Barb Rosenstock by John Schumacher at Watch. Connect. Read.  This is a link to The Noisy Paint Box Educator's Guide.