Buzzy As A Bee 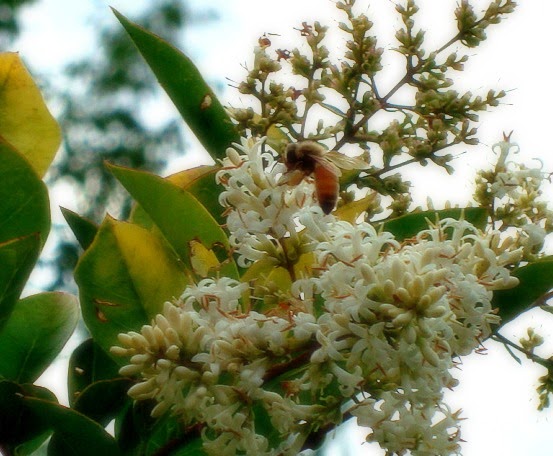 Perhaps in preparation for the long, record-breaking cold and snowfall depths in northern Michigan this year, perennials and flowering shrubs bloomed in profusion last summer.  During an entire day I had the pleasure of watching hundreds and hundreds of honeybees swarm around a bush overhanging my deck railing.  They graciously allowed me to get close enough to see the pouches of pollen collecting on their legs.  Their humming was a peaceful, pleasing melody. 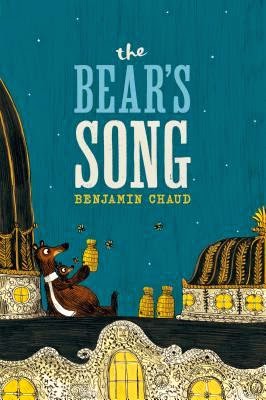 If you were to ask even the youngest reader what food bears crave more than anything else, you would hear a chorus of honey.   Even though winter is spreading her cold quilt, Little Bear is not quite ready to settle in for a long nap.  The Bear's Song (Chronicle Books, September 2013) written and illustrated by Benjamin Chaud follows him on one last undertaking, a quest for his favorite sweet treat.

Deep in his den, Papa Bear starts to snore.  Winter whistles through the forest. Hibernation has begun.

Little Bear is not in the den.  Oh, no.  He is merrily following the sound of a single bee.  Despite his youth, he has learned that a bee will lead him to honey.

With an instinct as old as time, Papa Bear suddenly wakes knowing Little Bear has vacated the premises.  Searching left, searching right; Papa Bear can't get the errant youngster in sight.  From the forest he runs until he finds himself among streets lined with buildings and filled with people, lots of people.

Up, down and all around the father sniffs and scurries trying to locate Little Bear.  Whoosh!  Smash!  What do Papa Bear and a chandelier have in common?  Not about to let stage fright deter him in the slightest Papa Bear opens his great toothy mouth to sing a lullaby sure to lure the smaller bear to him.

When the proverbial dust has settled, there sits Little Bear in the middle of the audience seating.  He has a surprise for his Papa.  Certain sightings are meant to be shared.


Clever word choices by Benjamin Chaud replicate the sound and flight of the bee.  Page turn pacing mirrors the frantic search of Papa Bear and the determined pursuit of Little Bear. Tying together the alliterative and rhythmic language is a liberal dose of humor throughout.  Here is a single passage.

Looking rather dapper indeed, Paper Bear darts across the hall.
Now where could that bee and that Little Bear be?

Using a subdued, understated color palette of blue, gold, green, black, brown and cream with bits of rustic orange and red, Benjamin Chaud appeals to readers' sense of adventure.  With the matching dust jacket and book case we are introduced to his meticulous details, intricate designs and embellished architectural interiors and exteriors.  His opening and closing endpapers featuring a cream and gold honeycomb populated by bees foreshadows events to come.  Even the small oval illustration on the back continues the story's conclusion.

Each of the twelve two-page illustrations stretch from page edge to page edge filled with stories within the story.  Reader's eyes will first be scanning for Papa Bear, Little Bear and the bee.  Then they will see the multitude of extraordinary tiny visuals that will captivate and entertain; the lumberjacks leaving their saw stuck in the tree as they watch from the limbs as Papa Bear runs by them, the advertisements for honey on a sign and on the side of a bus in the city, the child wearing a bear hat who seems to be the only one to notice Papa Bear, bees engraved in the opera building exterior, or a lone shoe left on a ledge in the opera house.

I found myself smiling at every single illustration but the one which is the funniest to me is Papa Bear running through the forest after Little Bear and the bee.  To see the reactions of every other being as he approaches is laugh-out-loud hilarious.  It's a study in contrast; they are focused on Papa Bear, he is centered on his search for Little Bear.


If you are looking for a humorous adventure, jam-packed with delightful details, then The Bear's Song written and illustrated by Benjamin Chaud is a must read for you.  Be sure to pair it with Sergio Ruzzier's Bear and Bee for a story time that will hum with joy.  You might consider extending it even further by reading from Sandra Markle's The Case of the Vanishing Honeybees:  A Scientific Mystery.
Posted by Xena's Mom at 2:10 PM