Deep In the Hearts of Texans

When his footprints filled up with water the Great Lakes formed.  It was next to nothing for him to lasso a tornado.  She liked to ride the Mississippi on the back of an alligator.  Folks say her holler could be heard from one end of the river to the other.  Paul Bunyan, Pecos Bill and Sal Fink, the daughter of none other than Mike Fink, the keelboat man, are personalities who populate American tall tales. 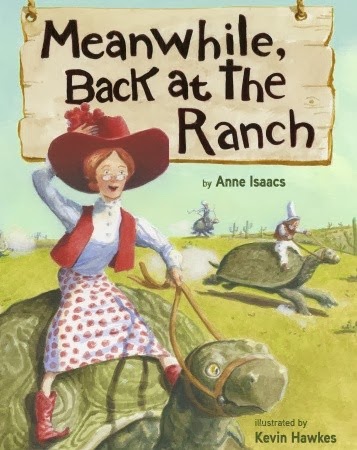 We enjoy their exaggerated character traits and accomplishments whether they are from the minds of storytellers or people from the pages of history.  With such titles as Swamp Angel (Dutton, 1994, Paul O. Zelinsky, illustrator, Caldecott Honor book), and Dust Devil (Schwartz & Wade Books, 2010, Paul O. Zelinksy, illustrator) to her credit, Anne Isaacs has penned another book, Meanwhile, Back at the Ranch (Schwartz & Wade Books) brimming with larger than life characters.  With illustrations by Kevin Hawkes (Library Lion by Michelle Knudsen, Westlandia by Paul Fleischman) readers can step into a Texas circa 1870.  Of course, this won't be like anything they've ever previously read about this mighty state.

On the Fourth of July 1870, the widow Tulip Jones of Greater Bore, England, inherited thirty-five million dollars and a ranch at By-Golly Gully, Texas.  She moved there at once.

Tulip Jones did not come alone.  Accompanying her were three trusted female servants, Linsey, Woolsey and Calico, and twelve tortoises named for the months of the year.  They must have made quite a sight on the ship sailing across the Atlantic and eventually arriving in Texas.

Despite it being one of the hottest summers on record, the four women got to work planting a garden.  If you think the vegetables from the garden were normal, think again.  The rind from one of their watermelons was big enough to use as a hay shed.  I'll give you one guess as to what happened to those tiny tortoises.

The quiet and calm enjoyed as they settled in was rudely interrupted when word spread of the widow's wealth.  It seemed every man in Texas was single and wanted to marry Tulip Jones.  Can you imagine having one thousand men show up at tea time every day?  The first order of business was to hire a proper baker.  Charlie Doughpuncher became a member of the ranch team.

During the day the widow turned as many suitors away as politely possible.  In her kitchen each evening Charlie would listen to her complaints while offering up his fresh baked goods.  After several days, at her wits' end, Tulip came up with a plan.

Her faithful ranch hands, Linsey, Woolsey and Calico, weren't willing to put all their "tea leaves in one cup" coming up with another secret idea all their own.  Three challenges later the two courses of action collided in an unparalleled feat of sewing ingenuity.  As night fell Tulip Jones found herself the sole occupant of By-Golly Ranch.  This hardly seemed a fitting end to this tale. ....And it was not.


Oh, how I enjoy the tall tales of Anne Isaacs.  She has a way with words whipping up the most outlandish events but making readers believe they happened exactly as she describes them.  Only in her mind could tortoises not only become huge but the bigger they grow the faster they run.  In her stories, the Rio Grande flows backward and cake batter is stirred by paddling in a canoe.  Tulip Jones' nightly conversations with Charlie are hilarious, loaded with her insightful observations.  The characters' names match the place and time and are guaranteed to produce grins galore.  Here is a sample passage.


"That Tumbleweed Thompson is so clumsy he couldn't hit the ground with his lasso," she told Charlie one night.  "And Big Toe Anderson has nothing on his mind but his hat!"
"Try this," Charlie said comfortingly, and he offered her a blueberry scone fresh out of the oven.


Even a casual glance at the matching dust jacket and book case illustrated by Kevin Hawkes, will have you going back for further scrutiny.  It's not every day you see giant tortoises ridden like horses traveling through a cactus covered desert.  On the back framed in a tied lasso are two of the more misguided suitors, downright varmints, with conniving, leering smiles on their faces.   The opening endpapers feature an arid landscape with a stagecoach speeding from one side to the other.  On a post hangs a sign warning readers about exaggeration and the laws of Texas.  A wily vulture sporting a cowboy hat points a claw toward the notice.  The closing endpapers show the hilly ranch lands occupied by the twelve grazing tortoises and a lonely hare watching.

Hawkes uses the title page and verso to start the story visually prior to the narrative beginning, showing Tulip Jones and her trio of friendly servants getting the news of her inheritance.  Every page is teeming with humorous details; the solicitor irked by the bird on his hat, an armadillo and chicken using parasols to keep off the hot Texas sun, an owl has made a hole in one of the suitor's hat's as a home and a rattler has wound around Sheriff Arroyo's hat wearing a smaller version of the same hat.  The Open acrylic and Prismacolor pencil illustrations throughout vary in size and presentation.  They may cover two pages or a portion of one.  Rope is used as a framing and dividing element to good effect.

The line of rather grubby-looking suitors sitting astride all sorts of four-legged transportation is one of my many favorite illustrations.  The details have me laughing every time I look at this picture.  Who could resist a tobacco-spitting guy holding a cactus in a pot rimmed in hearts or a farmer with barbed wire wrapped around his hat holding a dead squirrel?


If reading Meanwhile, Back at the Ranch written by Anne Isaacs with illustrations by Kevin Hawkes, doesn't have you longing for time in Texas, I don't know what will.  This is one rooting, tooting rip-roaring ride of a story as big as the Lone Star state.  It has my highest recommendation as a read aloud treat.

Make sure to follow the links embedded in Anne Isaacs' and Kevin Hawkes' names to access their websites.  Follow this link to the publisher's website to take a peek at more pages from the book.  For more artwork by Kevin Hawkes and a Q & A with author Anne Isaacs, head over to Seven Impossible Things Before Breakfast hosted by Julies Danielson.
Posted by Xena's Mom at 7:10 PM