When we see, taste, touch, smell, hear or do something for the first time, it leaves a lasting impression in our memories.  Everything about this will never be exactly the same again.  If what we've experienced is out of the ordinary, it is only natural to want to share it with others.  We have a desire to recreate this event; to capture it, to preserve it. 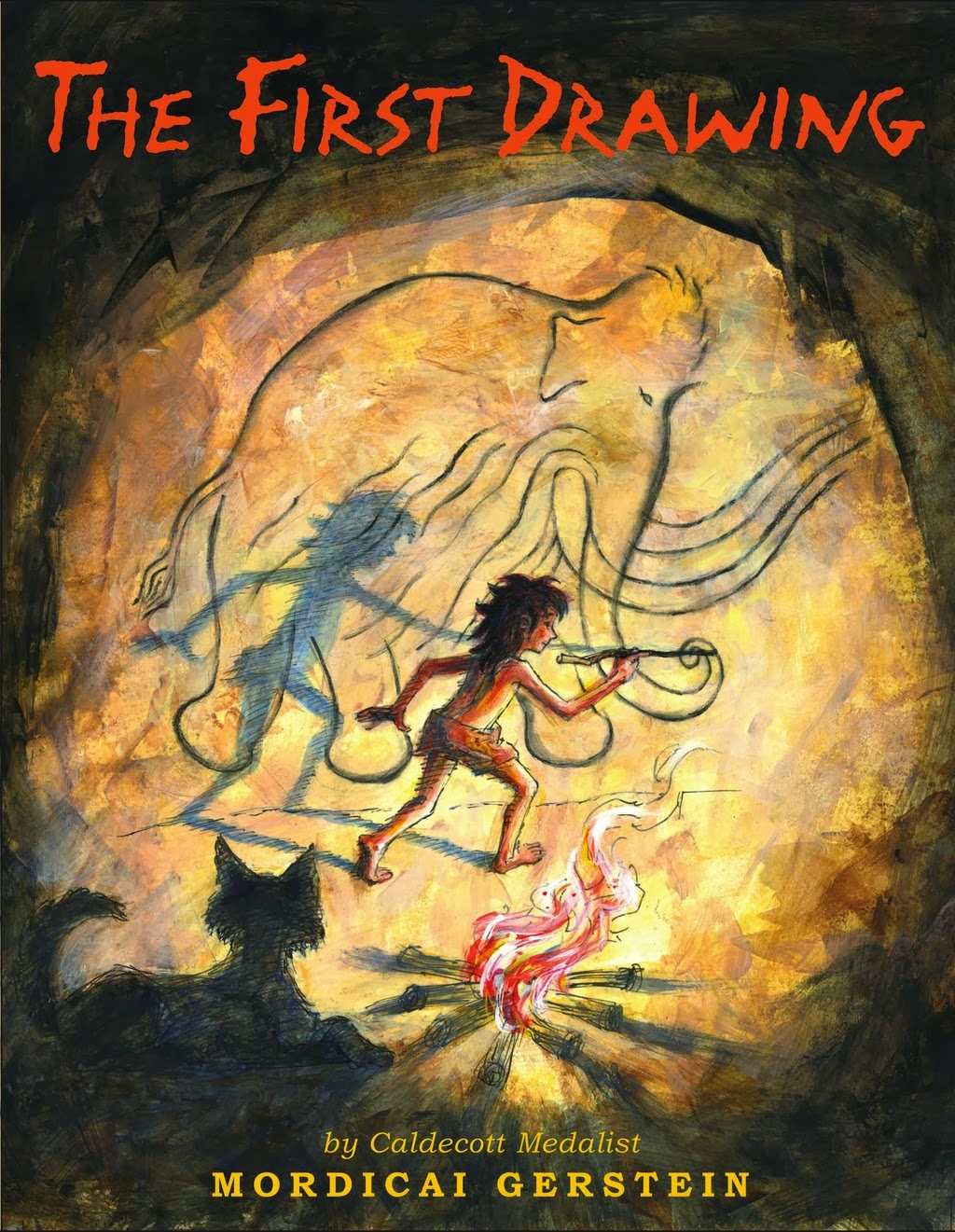 I freely admit to not taking this a step further; wondering about the first time anyone sees, tastes, touches, smells, hears, or does what I have.  In his newest title, The First Drawing (Little, Brown and Company) Mordicai Gerstein does wonder.  From a clue, an imprint left in a cave, Mordicai Gerstein makes a story.

Imagine...
you were born before the invention of drawing,
more than thirty thousand years ago.

A young boy lives in a cave with a host of relatives.  One of his greatest joys is spending hours watching all the animals living around his home.  By his side in these daily adventures is a wolf, Shadow.

This boy sees what others do not.  They see clouds or stones but he sees shapes of creatures.  At night when he should be sleeping, as the flames from the fire flicker on the walls, he sees even more animals moving along the rough rock.

He is given a nickname because of his abilities.  It's not meant as unkindness but only a statement of the others' understood truth.  One day as the boy is working with his father, a chance meeting alters the course of everyone's lives.

He, alone except for Shadow, has a very close encounter with a Woolly Mammoth.  As the seconds tick by, his mind is recording every sensory perception.  Later as he tries to explain it to his father, his father sighs the sigh of a long-suffering adult and shakes his head in puzzlement.

Sleep eludes the boy that night.  His memories are conjuring up a living, breathing likeness of the very Woolly Mammoth he saw earlier.  Unable to contain his excitement he awakens all the others in the cave.  As surely as if it is standing before them, he can see it on the wall.  All the others, his parents, siblings, grandparents, aunts, uncles and cousins, cannot.

Impulsively, needing them to see what he does, the boy grabs a stick from the fire.  From the darkened end, lines form a shape.  A frightened shout causes him to stop.  This has to be magic!


It is with the introduction, three simple but intriguing sentences,  Mordicai Gerstein says, "Come readers, turn the page and follow me."  Each statement, or group of statements, on the following pages employs an economy of words but the point of view gives those phrases emotion.  Within the text, Gerstein adds dialogue to bring familiarity to the telling.  We readers become the boy's shadow. A favorite passage of mine is during his meeting with the Woolly Mammoth.

It sniffs you with its trunk,
then stands perfectly still.
So do you.

You're afraid to move.
It's like a fur-covered mountain
with eyes that look into yours. ...


Through his artwork Caldecott Medalist, Mordicai Gerstein has the ability to take us wherever he desires.  Unfolding, spreading open the matching jacket and cover, we see the title over a boy drawing on a cave wall by the light of a fire as a wolf rests watching.  On the back the same wall with the same drawing is featured with a noticeable exception.  A present day boy is looking at the picture, pencils in hand, a roll of paper under his arm.  His faithful hound walking before him points his nose at the footprint of a child and the paw print of a wolf.  The words above them read,

Can you imagine who made the world's first drawing?

This image is repeated inside on the first page followed, with a turn of page, by another of the boy and his dog looking at an elephant in a zoo within the verso on the left-hand side.  Under the text on the title page, on the right, the boy is hanging up his paper.  On the next two pages as the present-day boy stares at the paper, Gerstein shifts us to thirty thousand years in the past to tell his story showing the boy from the past with Shadow looking up at a cloud formation.

In a series of illustrative portrayals rendered in acrylics, pen and ink, and colored pencil, single pages filled with spirit, smaller images grouped on a page brimming with movement and emotion, and dramatic two-page spreads, Mordicai Gerstein makes us believe, in a flicker of spontaneous inspiration, a first happened.  His color palette of mostly brown and blue hues with his intricately drawn lines takes us effortlessly into the past.  One of my favorite illustrations is of the boy sleeping next to Shadow in the cave.  As he dreams of running among the animals whose shapes he sees in everyday things, they appear on the cave wall glowing in the firelight.


As surely as magic must have surrounded people when they looked upon the first painting on a cave wall, readers will feel it too as they read The First Drawing by Mordicai Gerstein.  Not only is this a marvelous tribute to the act of drawing, but it causes us to wonder about other firsts.  Don't miss this beautiful book!

In an author's note on the final page, Mordicai Gerstein speaks about the inspiration for his telling of this story.  Follow this link to an interview at Seven Impossible Things Before Breakfast.
Posted by Xena's Mom at 12:41 PM