Every day, every week, every month and every year I look.  As each class enters I search the children's faces, I watch their body language and I notice who is left alone.  Nothing is said but the silence is deafening. 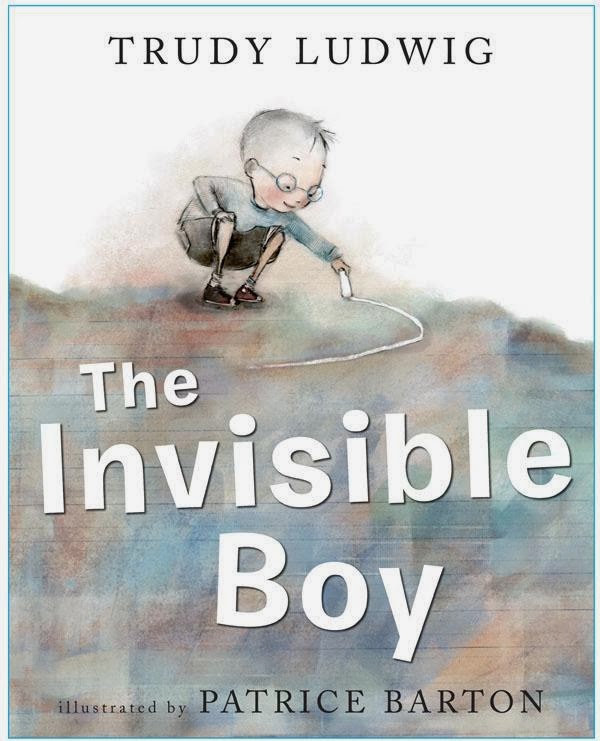 It may happen when you enter an event for the first time or it may happen every single day.  Is it the color of your eyes, hair or skin? Are you too tall, too short, too thin, or too heavy?  Are you too young or are you too old?  Is it because you are too smart or not smart enough?  If you feel isolated even though people are all around you, you can't help but wonder why.  In October 2013 a book addressing this aloneness, The Invisible Boy (Alfred A. Knopf, an imprint of Random House Children's Books) was released by author Trudy Ludwig with illustrations by Patrice Barton.

Can you see Brian, the invisible boy? Even Mrs. Carlotti has trouble noticing him in her classroom.

Mrs. Carlotti's attention is focused on those making the most noise; those speaking the loudest or whining the most.  These students are in sharp contrast to Brian.  Brian is the silent type.

At recess he longs to be picked for a kickball team.  He is the last one standing.  They begin the game without him.  At lunch his classmates talk about a party they attended.  Brian was not invited to the party.

In the afternoon Brian chooses to do his most favorite thing rather than play board games or read.  Brian draws and draws.  In his pictures dragons stand on tall buildings, space aliens do battle, pirates claim treasure and heroes find friendship.

At the start of the next week, Justin is introduced to the class.  Brian welcomes Justin, a new student, with a quiet smile.  In the cafeteria the students gather around Justin making fun of his lunch and of his eating with chopsticks.  Brian does not laugh along with them.

A clever, friendly drawing is left in Justin's cubby the next morning.  On the playground another artistic picture is noticed.  In the classroom a group project expands from two members to three.  One student, one person, can truly make a difference.


Using an unseen narrator and dialogue, Trudy Ludwig gives readers a very clear idea of how Brian is treated in his classroom each and every day.  The language used by the boys and girls and the events portrayed are not unlike those happening in schools everywhere.   Specific examples are woven into the story; each one making Brian feel more and more like a ghost than a real live boy.  Here is one passage.

In a very realistic series of scenes, she also clearly depicts, with the use of a narrator and dialogue, how change is possible.


Rendered in pencil sketches painted digitally, the illustrations of Patrice Barton pair beautifully with the story. On the front of the matching jacket and cover, Brian is alone doing what he loves best.  On the back we see him at work in his classroom drawing during Choosing time.  This picture is smaller, circular in shape.  On the opening endpapers everything is white except for an illustration tucked in the lower right-hand corner of Brian, alone, with his piece of chalk drawing a shape.  The closing endpapers glow with the images of six happy children chalk features extending from their bodies.  Brian is busily drawing as Justin looks on holding a piece of chalk too.

Barton alters her image sizes to flow with the text.  Readers are treated to two-page spreads, close-ups of expressive students, smaller visuals clustered together and single pages.  There is a youthful friendliness to her illustrations; drawings may appear on notebook paper or be layered with tape as if in a sketchbook.  For those times when Brian is feeling invisible he is shown in grays, black and white.  As Justin befriends him his appearance is more and more colorful.

Facial expressions and little details like the sharks drawn on Brian's lunch bag or the speech bubbles in Brian's drawings don't detract from the seriousness of the story but add to the realness.  One of my favorite illustrations is of Justin finding the drawing in his cubby.  The classroom area is depicted in softened outlines of bookcases, cubbies, backpacks, growing plants, and hanging artwork.  Off to the right is the enlarged drawing made by Brian.  The kindness in this picture leaves the page reaching out to the reader.


The Invisible Boy written by Trudy Ludwig with illustrations by Patrice Barton is an important book.  It is a book about living in the present, noticing others and reaching out with a single act of goodness for someone else.  I encourage you to read this book and to share it with others.  This is one of those heartprint books.

For more information about Trudy Ludwig and Patrice Barton please follow the links embedded in their names to their websites.  If you would like to see more pages from the book, follow this link to the publisher's website.