A Hat, A Lump, And Four People

It all started with a hat.  Not a top hat or a straw hat or even a cowboy hat but a baseball cap.  Without any observable effort on the part of anyone in particular, baseball caps have risen to the status of talisman.  Representative of a team, person, event or place, they hold significant meaning for the owner.  Each person has a unique way to wear their prized possession; even to the point of having the bill trained to a specific shape. 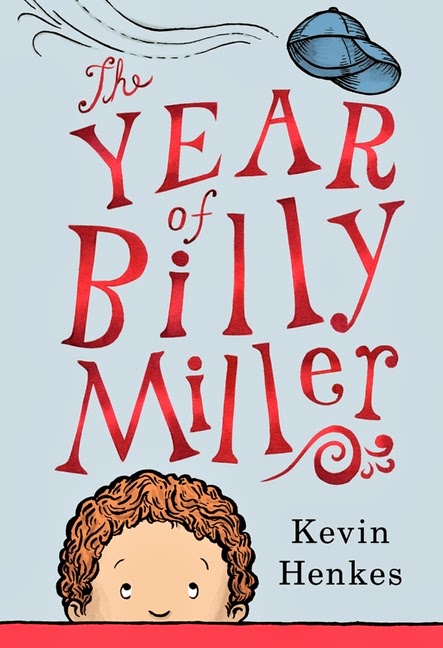 When you are seven years old vacationing on a family summer road trip before your second grade year, a black cap with silver letters reading Black Hills is like pirate's treasure.  If a strong wind should happen to blow said cap off your head, you might do something foolish without thinking to get it back.  This is why the main character of Kevin Henkes's new book, The Year of Billy Miller (Greenwillow Books, an imprint of HarperCollinsPublishers) has a lump on his head.


It was the first day of second grade and Billy
Miller was worried.  He was worried that he
wouldn't be smart enough for school this year.

Billy's mother, an English teacher at the local high school, is upbeat, cheerful, dedicated and she kisses the bump on his head before leaving.  An artist specializing in turning what others see as trash into treasure, Billy's father stays at home taking care of Sal, his younger sister.  A letter from Billy's new teacher, Ms. Silver, says this is the Year of the Rabbit but Billy's father assures him, in reply to Billy's question, this is the Year of Billy Miller.

In response to more than one unkind remark from an irritating new girl, Emma, Billy makes a drawing which he fears Ms. Silver thinks is about her.  His plan to assure his teacher how nice he really is involves a safety pin, a paper clip, a dime, a nickel, a quarter, a nail and a small rabbit figurine.  Ms. Silver's words in acknowledgement of Billy's gesture make the second day of school shine and his heart sing with happiness.  We readers know Ms. Silver is the perfect person to be teaching a classroom of second grade students.

While a Saturday morning, later in the fall, making dioramas with Papa, Ned, Billy's best friend and Sal, does not go as expected for Billy or his father, a shift in a bedtime ritual depicts the respect the two have for one another.  Glitter, a hair dryer and a quick-thinking adult save the day and pave the way for an after school discussion and welcome revelations.  We readers know, without a doubt, Papa is an unforgettable person giving and receiving unconditional love.

Sal can be downright pesky.  Her favorite friends are five pale yellow, plush whales she has named the Drop Sisters, Raindrop, Snowdrop, Gumdrop, Lemondrop and Dewdrop.  They get carted around in a much-loved pillowcase.  We readers know from a wintry adventure to a favorite restaurant, the lure of a magic pearl, a night of frustration and fright and a dragon-stamped letter, although he would rather not admit it, Billy cares deeply for Sal.

As the school year draws to a close, Ms. Silver has a plan for a special night.  Students are going to read original poems written about a member of their family.  Having decided to feature his mother, Billy is having a hard time putting any thoughts on paper.  An unexpected late night excursion to the back yard gives Billy all the words he needs.  A nudge to Billy's elbow, a necessary souvenir, and observed words said into a silenced microphone are the quintessential ingredients in this mother's love.  We readers know this is the Year of Billy Miller.


Having read The Year of Billy Miller twice and most of it a third time, the staying power of this book is Kevin Henkes's masterful writing.  Henkes divides Billy's school year into four parts represented by four people, Teacher, Father, Sister and Mother.  Five chapters in each depict moments over the course of a day or two or a little bit longer.

What elevates these seemingly ordinary, everyday episodes into treasures for our reader's heart is the portrayal of the interactions between Billy and these four people.  Henkes invites us, with his words, into pivotal conversations.  Realistic details, richly stated, bring us into each intimate instant endearing us to these fully human people.  Here are a few examples from this book.

Papa seemed to have a window into Billy's
thoughts.  "If you pick Mama, that's fine with
me.  And if you pick me, it will be fine with
Mama.  Remember that."
"Member what?" asked Sal. who'd just
popped up behind Papa like a Whac-A-Mole
at the county fair.
Papa turned.  "Remember not to touch anything
until you wash your blueberry hands.
And don't you dare kiss me with those
blueberry lips."  He snatched up Sal and hauled
her off to the kitchen, her giggles trailing
behind them.
Billy sat alone, considering the choice he
had to make.  He sucked the web of skin
between his thumb and pointer finger, his
hand falling across his chin like a beard.

The air in the auditorium was heavy, but it
was not still---it was electric.  At least, that's
the way it felt to Billy.  Parents, brothers, sisters,
grandparents, aunts, uncles, neighbors,
and friends were filling up the room.  People
were talking and fanning themselves.  Little
kids were chasing up and down the aisles and
climbing on the seats.  Eruptions of laughter
came and went in waves.


From working with elementary students for thirteen years, I can't think of a more heartwarming, true-to-life depiction of a second grade boy than readers find in The Year of Billy Miller by Kevin Henkes.  The personalities of Ms. Silver, Papa, Sal and Mama developed by Henkes make you wish they were in your world.  Small black and white drawings sprinkled throughout the text highlight memorable points of time.  This title is one to be enjoyed over and over.  Whether you share it with a few or many, it will leave a lasting impression.

The link embedded in Kevin Henkes's name above will take you to his website.  This link takes you to a printable PDF file, an author study of Henkes's titles including The Year of Billy Miller. To access the publisher's website and look inside the book (forty plus pages) follow this link.
Posted by Xena's Mom at 1:01 PM