I have seen with my own eyes the transformative power of storytelling whether I am telling to one, five, fifty or five hundred; it's in the looks, the silence, the sighs, the knowing nods of my listeners and in the inevitable question, "Is this true?" My reply is always the same, "What do you think? Isn't there a truth to be found in every story for each listener, something that speaks to their heart?"   Unlike the oral teller in a limited setting (with the exception of taped tellings, duly noted), an author's written words can reach an unlimited readership for an unlimited amount of time; touching generations. 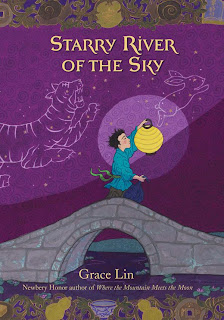 In Starry River Of The Sky (Little, Brown and Company, release date October 2, 2012) author, Grace Lin, bids readers to reenter the world of her 2010 Newbery Honor winning title, Where The Mountain Meets The Moon.  Blending traditional, timeless folktales from the Chinese culture with the main narrative, she fashions a story laced with life's most meaningful truths.  Her words are like a hand held open for us, hoping we will except the invitation to hold on and walk with her into this beautiful story.  From the first sentence to the final word we are under the spell of her magic.

Rendi was not sure how long the moon had been missing.

With this first sentence we're drawn into the story by questions.  Who is Rendi?  Where is the moon and why has it gone missing?

Rendi, a boy, has hidden on a merchant's cart filled with large covered jugs (gangs) of Son Wine.  He is discovered when the innkeeper, Master Chao, in the poor Village of Clear Sky makes a purchase.  Left by the merchant, Rendi becomes the inn's new chore boy, a vacancy needing to be filled after the departure of the innkeeper's older son, Jiming.

Hints are left for the reader as to the wealthy way of life Rendi has left.  To himself, his intentions are clear; leaving this dusty, drought-ridden, sorry excuse of a village is his top priority.  Of interest to him though is the large expanse of stone, a plain, stretching beyond one's view next to the inn.  Why is this here? Where does it go?

With the arrival of a new guest, paying for one month's rent on their room in advance, every one's lives, their perspectives and relationships begin to alter.  Gently, but with purpose, the ethereal Madam Chang through story and conversation begins to offer explanations to the people living in and near the inn; causing them to question what they believe to be true and to recognize what is right before their eyes.  It seems there is a celestial imbalance paralleling the discord in the lives of Master Cho, his daughter, Peiyi, their neighbors Widow Yan and her daughter, MeiNan along with old, confused Mr. Shan.

Why is Rendi hearing a whimpering and moaning which appears to come from the moonless sky each night? Who are the government officials seeking?  Will the thieving traders succeed in their greedy plot?  Will love triumph?  Will wishes come true?

Imagine, if you will, beginning with a bud which a petal at a time opens until in full bloom; this book is the glorious result of a flowering realized. Madam Chang is not the only one with stories, others tell theirs, each building one upon the other. Soon the line between reality and story blur and blend.

Grace Lin's writing is so compelling, even though I have never heard her speak, I hear her voice as if she is reading this book to me.  Her setting is finely formed to the point where you can open a page and step right in.  Characters speak to readers with thoughts and desires timeless in quality.

What follows is a passage from Starry River Of The Sky.

The sky sent out another pitiful groan, and Rendi looked at her in confusion.
"Remember your story?" Madame Chang said. "The duke believed that if a listener truly understood, he can hear what another cannot.  You must understand in a way none of us do."
"But that wasn't true," Rendi protested. "The duke was tricked."
"The duke was tricked," Madam Chang said.  "But that does not mean what he believed was false."
The light of the firefly lanterns flickered, and shadows wavered over Rendi's frowning face.

Grace Lin has penned a story, Starry River Of The Sky, resplendent in its honor of the human need to listen to and tell stories bridging the gap between young and old, then and now, seeking to find the similarities in cultures and illuminate the differences.  My book is an advance reading copy without her intricate, stunning illustrations as were seen in Where The Mountain Meets The Moon. It will be a happy day when I can purchase the hardcover copy to sit next to its companion on my personal bookshelf.  Thank you Grace Lin for sharing your gift of story with so many.  Starry River Of The Sky is a treasure beyond value.