Some winter mornings after a snowfall when the full moon is setting and the sun has started to lighten the horizon, walking in the backyard, I see signs of a party, of dancing by the light of the moon.  Rabbits have left their footprints peppered across the landscape in gleeful circles.  It makes me wonder what happened when I was sleeping and they were not. 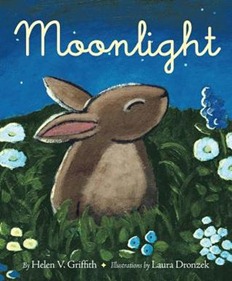 Are rabbits the only beings playing in the crispy air?  Maybe something else moves through the quiet hours during the seasons, silently leaving a mark.  Moonlight (Greenwillow Books, January 24, 2012) written by Helen V. Griffith with illustrations by Laura Dronzek whispers an invitation to readers about Earth's lunar orb.

Head lifted a bunny longs for the moon's glow to light the night.  A breeze frees the cloudy cloak but the rabbit has already left for the comfort of a burrow and longed-for sleep.  As if the moon is a knife, it begins to gently spread its luminescence.

Through mountains, among the trees, high and low, across streams, the light moves with purpose until it reaches the cozy haven of the resting rabbit.  Does the light rest easy there?  No, it does not, but continues to cast its warmth into the dreams of the one who desired its radiance.

This is one of those very special books when the text is gathered together presents a six stanza poem, each with four lines, rhyming on the second and fourth lines.  Read as a single poem it's a graceful, lyrical ode to the moonlight reaching out.  How Helen V. Griffith choose to separate the poem, spacing and placing the lines throughout the pages, creates pauses, adding a calming, a sense of peace.

The imagery of using the moon's rays as if they're butter is a pleasing one.  Most readers associate butter as golden, adding color and warmth to the telling.  Butter makes the everyday, the simple, feel more than it was before, as does the moonlight.

Opening the book jacket readers see the rabbit nestled among leaves and flowers awash in the glow from the large moon on the left side.  Rich blue endpapers mimic the evening's presence.  The title page shows a cloud beginning to cover the moon.  All the illustrations within this title are across double pages.

The full color art rendered in acrylic paints by Laura Dronzek endearingly illustrates the moon's journey past sleeping parents and their children; goats, deer, robins, raccoons (wide awake) and trout.  Her depiction of the moon buttering Rabbit's dreams is gorgeous in its vivid colors surrounded by wide lines of yellow. While all the two page spreads with the brush strokes of yellow depict the moon's travels over the darkened land, my two favorites are when the moon passes through space and the final two pages; the party begins.

The combined talents of author, Helen V. Griffith, and illustrator, Laura Dronzek, bringing readers into Moonlight, is lovely, soothing to the soul.  One on one as a bedtime story, it's perfect.  With a group to introduce poetry, pacing in writing or to invite discussion about the difference between day and night, it would work wonderfully.  I can also see reading this before a rest time as a ritual, at the end of the day or a very special day, Pajama Day, in our classrooms.

Julie Danielson, blogger extraordinaire, at Seven Impossible Things Before Breakfast casts the spotlight on the artwork in this book here.  Take a peek inside the book below.  And for some reason I could not help thinking about the old song, Moonlight Serenade, written and made popular by Glen Miller.  I heard it quite a bit growing up.