He writes them, I read them.  There are not many titles penned by Jerry Spinelli which I have not consumed eagerly and repeatedly.  Maniac Magee, There's a Girl in My Hammerlock, Crash, Wringer, Stargirl, Loser, and Love, Stargirl are a few of my very favorites.  What sets the writing of Jerry Spinelli apart is his keen perception of human nature. 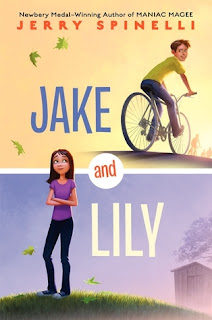 In his most recent title, Jake and Lily (Balzar + Bray), he tells a tale of twindom with total clarity, wit and wisdom. Giving voice to the brother and sister in alternating chapters, we are privy to their very special connection and individual personalities.   In the summer before sixth grade their togetherness shifts, changes, in a way that neither expects.

When Jake and Lily were six-years-old on their birthday after having a dream, the same dream, they found themselves at the town train station; having sleepwalked there.  This experience cemented what they already knew to be true, they can sense when the other might be in trouble even if they are miles away.  Why the train station you may ask?  The twins were born on a train, earlier than anticipated, when their parents were returning home from a wedding.

The two give this ability a name, goombla, keeping it secret from everyone until this summer, telling Poppy, their grandfather.  Jake and Lily have always been each other's best friend even sharing a single room with bunkbeds.  Their parents announce one morning they are now old enough to have their own rooms; Jake is excited, Lily is distraught.

It's as if the switch in their sleeping arrangement signals a change in how they spend their time and the people with whom they spend it.  Jake bands with a bunch of neighborhood boys, the Death Rays, looking for goobers.  Lily is sad, mad and lonely having lost the other half of herself.

As the days of summer unfold the paths they follow are somewhat bumpy.  How do you find your true self?  What do you do if a friend does something wrong?  Who is the best kind of friend?  Jake and Lily find answers to questions they've never had before.

In Jake and Lily Jerry Spinelli creates genuinely likable characters whose dialogue and situations are true-to-life with no punches pulled.  His secondary characters, parents who have a construction business, Poppy, Ernie the goober and Sydney and Devon, Lily's newest friends, all play significant roles in re-shaping Jake's and Lily's world and their respective places in it.  Spinelli's writing allows readers to believe as the characters do; trusting in similarities to carry you through the growth of celebrating differences.

Many times when I'm reading I will mark passages, a particular sentence, with small sticky notes signifying their importance to me.  In reading Jake and Lily I wanted to highlight whole pages with a yellow marker.  Here is a part of one of the most amazing passages.

"But you know what got to me most?" We were both too mesmerized to ask.  "It wasn't the sense of the vast endlessness of it all.  It was just the opposite.  It wasn't that it was all too much for me to comprehend.  It was that no matter how big and unimaginable it was, it was my home.  My ultimate neighborhood.  My hometown.  It was where I belonged.  And---here was the best part---so did everybody else belong.  Everybody who is and everybody who ever was.  I wasn't alone after all.  I was connected to it all.  That star there"---he pointed---"it's my neighbor...and that one...and that one...And Grandma.  For the first time in ten years I sensed her presence in something that wasn't a picture or a memory...."

Jerry Spinelli, you are a hero for writing your wonderful books like Jake and Lily; for helping us to not just look but to see.  Readers are given a chance to be the best they can be through your characters.  I highly recommend this title for an individual read or as a read aloud.