As Easy as Falling Off the Face of the Earth is Lynne Rae Perkins latest novel.  It is definitely going on Mrs. Culver's Top Twenty list for next year.  As I write this I am smiling as I look at the cover, read through the chapter headings again or recall the characters and their exploits.

To begin sixteen year old Ry bound for summer camp is riding the rails through Montana.  When the train stops for some minor mechanical repair Ry decides to disembark. 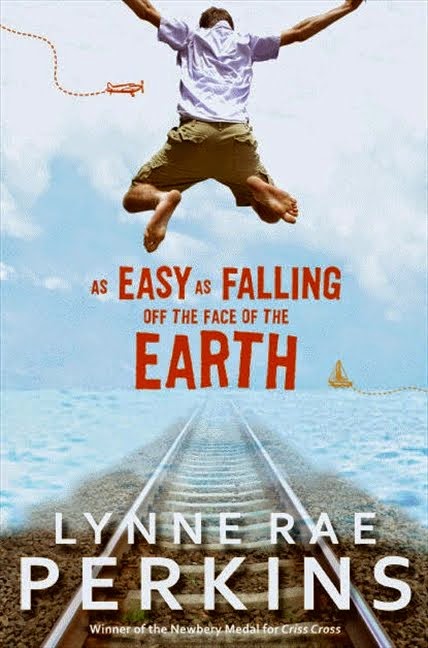 Wait a minute.  Was the---had the train just moved?  Ry turned his head to look at it straight on, but it sat on the tracks, as still as the lumpy brown hill he was climbing.  As still as the grass that baked in gentle swells as far as he could see and the air in the empty blue sky.  He must have imagined it.  Nothing had moved.  Everything was the same.  but there it was again.  Was it because he blinked?  Maybe it was the water in his eyes; it had wobbled up his vision.  He picked out a post alongside the tracks, directly below the line where the logo on the train changed from red to blue.  As he watched, the red and the blue shifted almost imperceptibly to the right above the post.  Then perceptibly.  The train was moving.

Oh, yes, Ry is stranded in the middle of nowhere Montana with his backpack still on the train. He left the train to call his grandfather after finally reading a letter from the camp which stated:

We are so sorry.  The Summer ArchaeoTrails Program will not take place.  A statistically improbable number of things have gone wrong and the camel's back is broken.  Your money will be fully refunded as soon as I sell my car and remortgage my house.

Gazing out at the wide-open space, wondering just how he is going to find a place with people and after taking stock of what he has in his pockets, Ry remarks,

But at least I have my health.

It is just this kind of wit, humor and dialogue that moves Ry's story forward with readers happily in tow eager to see what new unlikely event will befall Ry.

Of course his Grandfather, who is at the family home in Wisconsin taking care of their two dogs, Peg and Olie, is not answering his calls.  Why is that?  Taking the dogs for a walk turned into a race through the woods after the pair sighted a doe only to have the earth beneath Grandpa Lloyd's feet fall into an eight foot sinkhole twenty feet wide. The fall has left Grandpa wandering with a concussion and memory loss.


Where are Ry's parents?  They are sailing around the Caribbean with their own mishaps, the least of which includes the theft of their cell phone by a local monkey.

Peg and Olie are having an adventure of their own that the reader shares via comic book style graphics.

By walking to the nearest town, Ry meets Del.  Del is a self-made, self-employed, jack-of-all-trades, well traveled kind of guy.   He is the bridge that provides the connection between all these incidents.  It is Del that volunteers to take Ry to Wisconsin to solve the puzzle of Grandpa Lloyd not answering the phone.  It is Del that has a friend with an airplane that can take them to an island in the Caribbean.  It is Del's  former girlfriend, for whom he still has deep feelings, that has a boat that can take them to the island of St. Jude where he can hopefully locate his parents.

Each of  the little additional occurrences that transpire as they journey toward this goal are more far fetched than their predecessors.   As a reader one finds oneself shaking their head and asking, "What are the chances of that happening?"


Lynne Rae Perkins delightful illustrations peppered throughout the book add to the cohesiveness of her writing about these likable characters and the outlandish happenings that fate lays before them.  There is nothing quite so fine as a slice of life from Perkins' finely crafted pie.
Posted by Xena's Mom at 7:48 AM