Nod to Another Newbery 2010

Jacqueline Kelly, author of The Evolution of Calpurnia Tate (Henry Holt and Company, May 12, 2009), a Newbery 2010 Honor book, has penned a truly memorable first novel.  What makes this story unforgettable is the sense of time, place and family that Kelly brings to the reader through her love of words crafting visuals that not only transport but will transform. 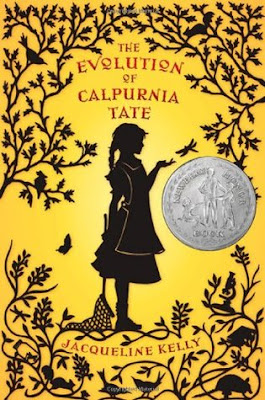 Calpurnia Virginia Tate, fondly called Callie Vee, was eleven years old in the summer of 1899.    She is the middle child of seven with three older and three younger brothers.  Her family is of means owning a large working farm and cotton gin which her grandfather established.

It is blazing hot in Fentress, Caldwell County, Texas.  Callie seeks respite in the cool waters of the San Marcos River near their family home floating in her chemise and thinking as she watches the webworms hanging from the oaks that lean across the water.  Seeing and questioning life around her differently than other young women her age sets Callie apart.

Her oldest brother, Harry, notices that Callie has an attachment to the natural world and he gives her a notebook to record her questions and observations.  Callie has heard talk about Charles Darwin's book, On the Origin of the Species.  A visit to the Lockhart library has Callie fit to be tied as the cranky librarian huffs that there is no copy of such a book in her library, she would need fifty cents to get a copy from another library and does she have a letter from her mother giving her permission to read it.

Bravely seeking out her grandfather, an eccentric living with the family but spending most of his time outside in his laboratory or in his library, Callie talks about her humiliating experience.  Without so much as a word he leads her into the house and his library.

He extracted a book covered in rich green morocco leather handsomely tipped with gold.  He polished it with his sleeve, although I could see no dust on it.  Ceremoniously, he bowed and offered it to me.  I looked at it.  The Origin of Species.  Here, in my own house.  I received it in both my hands.  He smiled.  Thus began my relationship with Granddaddy.

It also begins our relationship, in a small way, with Darwin as each chapter of The Evolution of Calpurnia Tate begins with an appropriate excerpt from his book.

That summer and beyond, before the turn of the century, readers journey with Callie as Harry courts two different women, as her tenderhearted brother Travis must face Thanksgiving and the loss of his turkey friend, to piano recitals, when three of her brothers fall in love with her best friend, during a cotton harvest, and the family dogs, the county fair, the first telephone and automobile, expectations of women of the time, the possible discovery of a new species by her and her grandfather and the inevitable discourse between members of the family.  The family dialogues around the dinner table were absolutely priceless especially after Callie tests out a new batch of her Grandfather's pecan brew. From spending so much time with her grandfather in scientific study Callie is able to set in her mind how she wishes her life to be but will society let her be herself  is a question left unanswered

For this reader  The Evolution of Calpurnia Tate by Jacqueline Kelly was most assuredly historical fiction at its best but it was so much more.  It was about connecting soul to soul with another like-minded individual, about the bridge that can be built between generations through conversation and shared experiences, about noticing  details that give the whole its uniqueness, and about choices that women must make; to choose their own road or the road that society dictates they take.