Of Ice And The Sea

From November 6, 2022 to November 18, 2022, the United Nations Climate Change Conference, more widely known as COP27, was held in Sharm El-Sheikh, Egypt.  In a November 7, 2022 article, Reuters includes statements found in a report by

One of the report authors, Robbie Mallett, states with respect to Arctic sea ice
We're starting to see something we cannot save.
In other words, within thirty years, there will be no more Arctic sea ice.  (The full report can be downloaded at the Scientific Committee on Antarctic Research website.)  This is catastrophic for the land and its inhabitants.
Knowing this, prompted pauses several times during the reading of the newest collaboration by author Candace Fleming and artist Eric Rohmann titled Polar Bear (Neal Porter Books, Holiday House, December 6, 2022).  (Their prior two books focusing on a specific creature are Giant Squid (A Neal Porter Book, Roaring Brook Press, September 27, 2016) and Honeybee: The Busy Life Of Apis Mellifera (Neal Porter Books, Holiday House, February 4, 2020).  With utmost clarity in words and images, we become a part of the world of a mother polar bear and her two cubs.  We experience their struggles for survival and their triumphs at succeeding in a realm changing much too fast. 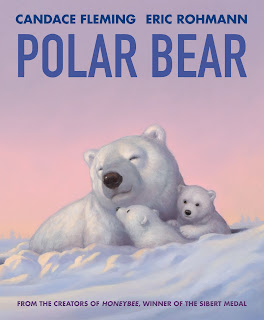