On Friday, very early in the morning, life delivered an unexpected break in my daily routines.  It lasted for several days.  So, I read and read and read.  And I am still reading.

The first book I finished I started on Thursday night.  Your Heart My Sky: Love in a Time of Hunger (Atheneum Books for Young Readers, March 23, 2021) written by Margarita Engle is an exquisite portrait of living on the island of Cuba in the summer of 1991.  It is told in three voices of two teenagers, Liana and Amado, and a wise singing dog.  In this novel in verse, each poem, no more than three pages in length, is breathtaking.  You pause after reading each one.  I am still thinking about how Margarita Engle could embed such heartbreak, longing, and beauty into these poems.  Each poem is titled. 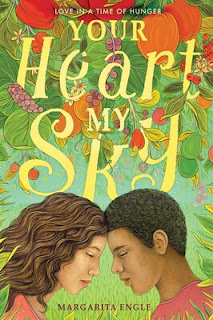 Although the government of Cuba is calling this el periodo especial en tiempos de paz, the special period in times of peace, for the majority of people it is a painful, frightening time of starvation.  Liana and Amando, have decided to forgo the government summer camp of farm labor.  It puts them both at a future disadvantage and on the radar of a government in total control of its people.

A chance encounter (or not if you believe the dog and I do) finds the duo working together in their desperate search for food for themselves and their families.  Their relationship gives them courage to do things like trading on the black market, helping those who shelter in caves before trying to make it off the island, and growing their own food in their family’s patios.  They do all this under the threat of discovery.

As their love grows, feeding their bravery, a tension enters their story.  Decisions need to be made.  Which comes first, hope or love?  Does one invite the other?  Or do they arrive together?

Here is one of the poems.

There is a two-page author’s note at the conclusion of the book.  At the publisher’s website is a curriculum guide.  There is a short conversation with Margarita Engle and additional poems at The Book Page for the cover reveal.

On September 28, 2021, The Beatryce Prophecy (Candlewick Press) written by Kate DiCamillo with artwork by Sophie Blackall was released.  One of several reasons I was eager to read this was after watching a video on Instagram posted by Sophie Blackall. (https://www.instagram.com/p/CUXUk2cAZxC/)  Sophie Blackall was right.  Once I started the book, I did nothing else until I finished it.  Hours passed as the stories of a goat, a monk, a girl, and a boy unfolded and intertwined. 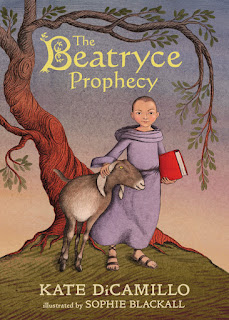 The goat, Answelica, is believed to be a demon by the monks of the Chronicles of Sorrowing.  Brother Edik dreads being anywhere near the beast who thrives on butting and biting the monks.  One morning his fear spikes as he enters the barn.  He finds a feverish young girl sleeping next to the goat, holding one of the goat’s ears.

The girl cannot remember anything about herself except her name.  Her name is Beatryce.  There are others who know exactly how she came to be alone with bloody and muddy clothing.  It has to do with a prophecy.

There will one day come a girl child who will unseat a king and bring about a great change.

The boy, Jack Dory, lost his parents in the dark woods by the hand of a wicked robber.  He lived with an older woman, Granny Bibspeak, until she died when he was twelve.  He remains in her home in a village that admires and respects the boy.  Jack Dory has the gifts of speed, remembrance, and mimicry.

Kate DiCamillo with this tale of mystery, intrigue, betrayal, haunting pasts, revenge, love and stories casts a spell that lingers long after the last word is read.  She reminds us how profoundly some things have changed, and others have not.  Sophie Blackall with her luminous endpapers, gorgeous first letters of each chapter, and full- and partial-page images breathes life into the characters and their circumstances.  Here is a passage.

They were three:  Jack Dory, Beatryce, and a goat.

Jack Dory did cartwheels as he walked down the road.

He followed the cartwheels with several handsprings.

“You cannot do this, can you?” he said, calling back to Beatryce.

“I cannot do it because I must walk along and pretend to be a monk,” said Beatryce.

The satchel was slung across her chest.  It bumped against her hip as she walked.  Her heart felt heavy.

But the goat did not seem worried.  Answelica ran to Jack Dory, kicking up her heels and shaking her head, and then she ran back again and walked at a sedate pace beside Beatryce.

Beatryce looked down at the goat.  She said, “I think he pretends to be happy.  I think that deep inside he is sad.  Those he loves are dead.  He is alone in the world.”

Answelica looked up at her, listening.

“I am not afraid,” Beatryce said to the goat. “I will not be afraid.”

She bumped her head against Beatryce’s leg.  Beatryce took hold of her ear.

“I am not afraid at all,” said Beatryce again.

At the publisher’s website you can download a teacher’s guide, a curriculum guide, and a sample chapter.  You can also view an interior illustration. The cover reveal and a conversation between Kate DiCamillo, Sophie Blackall, and John Schumacher, librarian, guest lecturer at Rutgers, and writer, on his site, Watch. Connect. Read., is enlightening.

A graphic novel, an ARC, kept me turning pages faster than the lightning flashing during a weekend afternoon storm.  City of Dragons #1: The Awakening Storm (Graphix, an imprint of Scholastic) written by Jaimal Yogis with illustrations by Vivian Truong follows Grace as she absorbs the death of her father, the move to Hong Kong with her mother and new stepfather, starting classes at a private school, meeting three new distinctive friends, and the hatching of a dragon egg in her bathroom.  It seems the tales of an emperor and nine dragons she remembers her father telling her are not myth but reality. 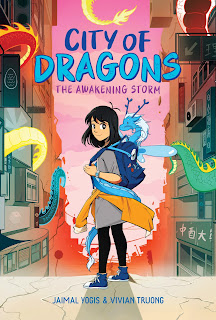 Ramesh, her first-day friend, and Grace, through Ramesh’s tech skills, sneak away from a class field trip.  An old woman in the market speaks one word repeatedly to Grace as she holds her hand.  Then she gives her an egg.  The hatched egg, now concealed in Grace’s backpack the next day at school, brings two more students, Jing and James, into the group.

That evening as the foursome try to figure out what the creature (Nate, named after Grace’s father) is, their only conclusion is that it is a dragon, a water dragon.  Very quickly they are pursued by unsavory characters who are part of a cult seeking to bring an enemy of the ancient Yellow Emperor back to power.  Unable to find the original old woman, they ask an elderly fishman known as the Southern Prophet for help.

Non-stop action heightened by realistic and witty dialogue by Jaimal Yogis amid detailed, expressive, and highly animated panels by Vivian Truong are certain to keep readers on the edge of their seats.  Hank, Grace’s stepfather, is not as he appears.  His boss, Dr. Kim has secrets of her own.  The Southern Prophet mourns the loss of his one true love, Mazu, a woman of the sea.  A trip to an island, a kidnapping, a wicked storm, and a series of earthquakes that might not be earthquakes elevate the tension.

This title is the first in a series.  The final page builds anticipation for the next book.  At the publisher’s website you can view eight interior pages.  Jaimal Yogis and Vivian Truong are interviewed about this title at The Beat.
Posted by Xena's Mom at 11:01 PM