Words are powerful; of this there is no doubt.  Their clever and careful use creates change.  One word with more than a single meaning is the word right.  It indicates a direction.  It can be a direction in your thinking or in literally moving from one point to another point.  It is the opposite of wrong; sometimes differentiating between fact and fiction or truth and a lie.  It refers to claims made regarding freedoms. 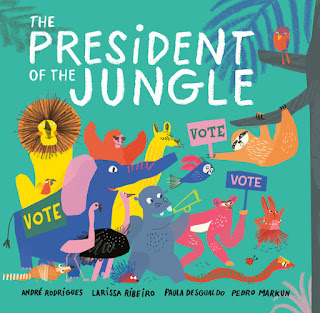 This past Sunday, January 19, 2020 my mom would have been one hundred years old.  It still boggles my mind to think at the time of her birth the ratification for women to vote in the United States was not complete.  The Nineteenth Amendment was not officially ratified until August 18, 1920 and not adopted until August 26, 1920.  There are still people today, here in the United States and around the world, who are struggling to exercise this right and championing for this right.  The right to vote can determine many aspects of our lives.  The President Of The Jungle (Nancy Paulsen Books, an imprint of Penguin Random House LLC January 7, 2020) written and illustrated by Andre Rodrigues, Larissa Ribeiro, Paula Desgualdo and Pedro Markun and translated from the Portuguese by Lyn Miller-Lachmann is about a group of animals who believe they need a new leader; one who acts for the benefit of everyone.

Hey,
what happened
to our river?

Lion wanted a swimming pool.
So, because he was King of the Jungle,
he rerouted the river to flow into his
front yard.  Now he had his pool!

This altering of the river's direction affected all the jungle animals for similar and different reasons.  They questioned the Lion's leadership.  They decided to protest his actions.  He ignored their concerns.  For this reason, they wanted an election, a democratic election to select a new head of their realm.

The owl explained an election to those who had only experienced life under a king. Together the animals of the jungle made a list of seven rules to follow in their election.

Monkey, Sloth, Snake and, yes, Lion wanted to be candidates.

They each proposed a platform.  They were varied, from providing privileges for a few to providing a voice and vision for everyone.  Each candidate worked to persuade the residents of the jungle to cast their vote for them.  Every form of media was used.  They appeared in person at rallies and during debates.  There were numerous, sometimes endless, discussions and arguments.

When the day of the first election came, the animals eagerly awaited to cast their secret ballot.  A candidate (Guess who?) was disqualified for breaking one of the seven rules.  Owl was the vote counter.  During the winner's acceptance declaration, the animals listened and knew they had all, even the candidates, been heard.  Every vote and very voice counts.


As stated on the title and verso pages this book is a result of a collaboration between four people, Andre Rodrigues, Larissa Ribeiro, Paula Desgualdo and Pedro Markun.  It was first published in Brazil in 2018 with the title Eleicao dos Bichos by Companhia das Letrinhas.  Through the translation by Lyn Miller-Lachmann readers are presented with a simple straightforward narrative easily understood by all ages.  In addition to the story line, commentary by the animals is included to enrich the tale, giving it a more personal perspective.  Certain words, later defined in a glossary at the close of the book, are placed in bold typeface for emphasis.  For the section on the four candidates a poster is placed on the left with their personal platform stated opposite, on the right.  Here is a passage.

The other animals were not happy.
They missed their river.  Lion had gone
too far!  Maybe he should not be
King of the Jungle.

It's ridiculous! (a monkey)
Lion thinks only of himself! (an armadillo)
We have no water!  My children are thirsty! (a rabbit)
Let's protest!  (a crocodile)
What if we had a new leader? (a sloth)


The highly animated scene of the animals eager to exercise their right to vote in their first election, on the matching dust jacket and books case, is our first glimpse of the lively and vibrant artwork featured throughout the book.  The animals' expressions here, even Lion, are happy and determined.  To the left, on the back of the matching jacket and case, an array of plants, leaves and ferns, in bright colors are placed on the same green canvas.  A large-beaked red bird perches on a sign reading:

IT'S A NEW DAY
IN THE JUNGLE.
The animals have HAD IT with
their king and are going to hold
their FIRST ELECTION.

A rabbit, wearing a tutu and a necklace, is holding a sign which reads:

On the opening and closing endpapers a golden background is used. The four candidates in the presidential election are depicted between the text on the title page.  This is framed in a golden yellow, square-shaped line with some ferns.  The river bed, sans water, begins on the verso and continues to the right with an animal and the first line in the story.  The canvas is white.

by mixing hundreds of paper cutouts and loose pencil and charcoal doodles, and then coloring them digitally

span double pages and full pages.  Background colors shift from white to one of the colors used in the animals, pink, dark green, dark pink, light orange, dark orange, a light yellow-green and rich purple for an evening sky.  The wide-eyed expressions and body postures leave no doubt as to the emotional mood of the jungle animals.

One of my favorite illustrations is the double-page picture on Election Day.  The background is white, acting here, and in all the images, as an element.  From top to bottom on the left are sprays of trees, ferns and leaves.  They continue across the gutter diminishing in height as a focal point is reached.  The animals appear as silhouettes, walking in a line, from left to right.  Their goal is the ballot box on the far right.  Rhinoceros is putting his ballot in the box.  This picture portrays exercising one's freedom.


Timely and important, The President Of The Jungle written and illustrated by Andre Rodrigues, Larissa Ribeiro, Paula Desgualdo, and Pedro Markun and translated by Lyn Miller-Lachmann, is a book to use to introduce the process and practice of democratic elections.  It also supplies readers with a reason for people's voices to be heard.  The seven rules and final two sentences are certain to promote discussions.  The glossary of election terms are words younger readers will have heard in adult conversations.  This is an excellent choice for your professional and personal collections.