Looking For The Familiar

Whether we move from city to city within the same state, move to a different state in the same country or leave our country's borders, our apprehension prior to the move finds its center in the people and places we are leaving behind.  Thoughts of using technology to connect with people, and even places, does lessen the worry, but it's still not the same as real life encounters.  As soon as we arrive at our new destination, sometimes even before we begin to settle, we start to explore our surroundings.  We are looking for the familiar. 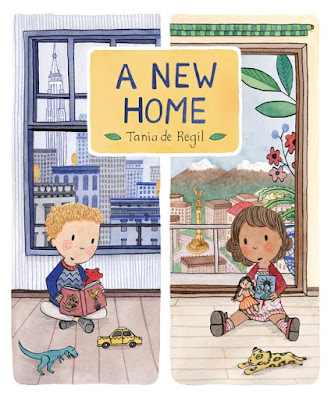 For children, the sooner they find places, a park, a library or a restaurant serving their favorite food, in which they feel comfortable, the more apt they are to relax.  A New Home (Candlewick Press, April 9, 2019) written and illustrated by Tania de Regil explores the parallel worlds of two children making huge moves.  They don't realize it, but one is moving to the other's city.

Mom and Dad told me that we
are moving to Mexico City.

Mama and Papa told me that we
are moving to New York City.

They each enjoy certain sporting and cultural events with their parents.  They can play in big city parks where they live now; like Central Park in New York City and the Bosque de Chapultepec in Mexico City.  They are both curious to know if there are museums for their new classes to visit in their new cities.

While realizing the detriments in their respective cities, homelessness and noise, there are multiple activities to occupy them during the summer with their families.  They wonder if there will be friends like they have now in this new city.  There are many unanswered questions.  One thing is certain, the child from New York City and the child from Mexico City, hold hope in their hearts.


As an author experiencing international moves, Tania de Regil understands the emotions of children when facing this sort of change.  Her portrayal of the blend of excitement and concern through simple straightforward text, fifteen sentences total, is profound.  As the narrative progresses Tania de Regil has worked to offer readers of all ages an opportunity.  It's an opportunity, regardless of geographic location, to see similarities in people and in the places where they live. 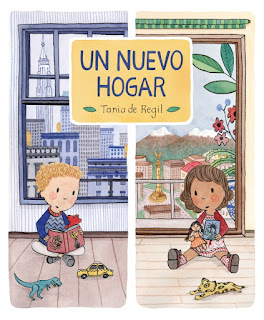 Un Nuevo Hogar was released on the same day as A New Home. (I don't have a copy of the Spanish title yet.)  When opening the matching dust jacket and book case, readers are introduced to the boy living in New York City on the left and the girl living in Mexico City on the right.  Outside their respective windows readers can point out elements for which their cities are known.  Each child is holding a book reflective of the city which will be their new home.

To the left, on the back, on a canvas of white are the words:

I hope my life
won't be so different
in my new city.

Along the bottom is a skyline from New York City.  Along the top is flora and birds more likely to be seen in Mexico City.  The opening and closing endpapers are the rich golden yellow shade used on the front of the jacket and case to hold the text.

Rendered in ink, colored pencil, watercolor, and gouache and assembled digitally, the illustrations vary in size from full-page pictures opposite a white page for text, two full-page images sharing the same text beneath them, two smaller visuals on a page sharing text in the middle and a two-page, half page illustration sharing text in the middle between the two pictures.  This layout and design allow readers to notice exactly what Tania de Regil wants us to understand.  For pure dramatic effect the narrative closes with a double-page image.

The perspective shifts to complement and heighten the narrative.  Readers will pause to look at all the details; a pigeon on the fire escape in New York City and on the balcony in Mexico City, grandmothers walking the children home from school, or the presence of the children's toys.  Even though both children wonder about their new homes, there is a warmth conveyed in every single picture.  It's an exploration of possibilities.

Two of my many favorite illustrations are when the children are playing in their respective parks.  For the boy the season is in winter using a soft gray in the cityscape behind leafless trees in Central Park.  In the foreground the boy is laughing, holding his red teddy bear and skating on a pond.  Behind him others are skating, and a film crew is working on a scene.  For the girl, a royal castle is in the background.  In the foreground the smiling girl is riding her bicycle on a large cobblestone pathway.  A food vendor truck is off to the left.  A man selling balloons and whirligigs is in front of her on the right.  Behind her is a pool of water with boaters rowing.  Both pictures convey the fun the children are having.  There is a sense of motion but also calm.


As her picture book debut in the United States A New Home and Un Nuevo Hogar written and illustrated by Tania de Regil is a marvelous depiction of questions children have when moving to a new city in a new country.  It also works beautifully to provide answers and relieve any worry.  There is true artistry in the text and illustrations.  I highly recommend this title for your professional and personal collections.  At the close of the book Tania de Regil features thumbnails on three pages of the illustrations with further information about the two cities.

To learn more about Tania de Regil and her other work, please visit her website by following the link attached to her name.  Tania de Regil has accounts on Instagram and Twitter.  At the publisher's website you can view an interior image.  The publisher has also provided an activity kit.  The cover reveal is at Latinxs in Kid Lit.  The book trailer premiere along with an interview is hosted by Scholastic's Ambassador of School Libraries John Schumacher at Watch. Connect. Read.  Tania de Regil is interviewed about this book at The Children's Book Council.  Process artwork is shared.
Posted by Xena's Mom at 10:07 PM