There are pockets on our planet, special spaces, unlike any other spot.  The plants and animals residing there are unique, survivors of distinctive habitats, weather and climate.  Some of them are found only in this one place.  Seeing these specific plants and animals in these particular locations for many of us will be an unrealized dream.  You have to wonder if perhaps this is the best possible outcome for these areas. 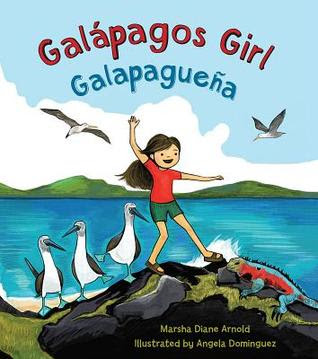 One of these regions is the Galapagos Islands, set in the Pacific Ocean off the coast of Ecuador. Galapagos Girl Galapaguena (Children's Book Press, an imprint of Lee & Low Books Inc., September 18, 2018) written by Marsha Diane Arnold with illustrations by Angela Dominguez and translated by Adriana Dominguez explores an island and one girl living there and loving everything the island offers her.  Through her discoveries we come to understand enchantment reigns in this island realm.

Valentina was born on an island formed by fire, surrounded by blue-green sea.

One child among eleven brothers and sisters Valentina saw Sally Lightfoot crabs on the island of Floreana among the lava rocks.  She swam with inhabitants of the ocean, even penguins.  Birds, tall and pink, butterflies, blue and delicate and sneezing iguanas caught her attention.

The sounds of the water and bird calls were like music to this child of the island.  She couldn't help but dance along with the movements of the animals.  A story told to Valentina by her Papa set the course for her future.

He told her how he brought the two tortoises, Carlitos and Isabela, to their island.  He explained the threat to many of the animals on the Galapagos Islands.  Valentina knew they needed her pledge to protect them and preserve their way of living.  When it came time to leave her beloved island to further her education, she spoke aloud from the boat and made a solemn vow.

Whenever there was a break at school, Valentina came home and worked on various islands learning as much as she could about every living thing.  As a biologist she returned to act as a guide for visitors, bringing her knowledge lived and learned to each.  Those who came and left were connected to the Galapagos Islands with the same commitment and passion as their guide.


When Marsha Diane Arnold writes we first read silently, but we can sense a lyrical quality to her carefully chosen words, asking us to read them aloud.  So we do.  In the text for this book the beauty of a place and its inhabitants is superbly woven into the day to day fascination of a little girl.  She embraces her environment with joy and respect.

The research conducted by Marsha Diane Arnold is apparent in the details.  This is a deeply personal story about Valentina Cruz and the Galapagos Islands.  Readers like the visitors to the islands cannot help but feel a kinship to this remarkable place and this girl.

Several times in the narrative words in Spanish are used but this is further enhanced with the matching bilingual text in Spanish.  This makes this story accessible to a larger audience.  Here are some passages.

"But, Mama," she protested.  "I am a Galapagos girl.
I belong here with the sea lions and penguins."
"You are ready to learn about the world beyond," said Mama.
"Like the sea, you are strong and free."
"And like our islands, you have a heart full of fire," said Papa.


When you look at the opened dust jacket (I am working with a digital copy.) the pure happiness exhibited by Valentina extends to the reader.  The inclusion of waved albatross, blue-footed boobies, and the marine iguanas alerts readers to a few of the species found only on the Galapagos Islands.  This spirited ocean scene extends across the spine to the back.  On the left, two sea lions bask on rocks as an albatross flies overhead.  The first sentence in the book is placed in the white bank of clouds above the grassy hills.

Tiny images are placed on the end flaps, Valentina swimming with sea creatures and Sally Lightfoot crabs crawling on rocky outcrops.  Blue-footed boobies dance beneath the dedications, both in English and Spanish.  On the title page, between Spanish and English text, Valentina strides among blue butterflies.

Each full-color visual, rendered in pencil on illustration board with digital color, is as lively as the creatures and Valentina.  These illustrations by Angela Dominguez span two pages or single pages depending on accentuating the pacing of the text.  When Angela portrays the animals she displays their essential endearing characteristics from the dancing of the blue-footed boobies, to the graceful swimming of sea lions and the sneezing of the marine iguanas.  (They are getting rid of the salt in the water.)

One of my many favorite illustrations is of Valentina and the penguins.  It spans two pages, edge to edge.  On the left a swimsuit-wearing Valentina is upside down doing a cartwheel.  A single animated penguin is next to her.  Her blue mask, snorkel and flippers are on the sandy beach.  To the right on rocks on three more spirited penguins.  A blue-green ocean stretches behind them beneath a pale blue sky spotted with clouds.

Valentina's and my hope is that after reading this book, you too will say, "We will help to keep them safe."

In Galapagos Girl Galapaguena written by Marsha Diane Arnold with illustrations by Angela Dominguez and translations by Adriana Dominguez this expressed hope is realized.  The rhythmic poetic words, buoyant, vibrant illustrations and Spanish translations create a book reaching numerous readers on several levels.  We are introduced to a valuable woman in the preservation of the Galapagos Islands, we see unique creatures in their natural habitat and we understand on a new level the importance of conserving this habitat.  After the Author's Note, pages About the Galapagos Islands and Fun Facts About the Galapagos Animals You Met in the Story further acquaint readers with this marvelous place on our planet. There is also a lengthy Bibliography.  Everything is in both English and Spanish.  I highly recommend this title for both your personal and professional collections.

To learn more about Marsha Diane Arnold and Angela Dominguez, please visit their websites by following the links attached to their names.  They both have links to blogs from their websites.  Both Marsha and Angela are on Twitter.  Angela and Marsha have an account on Instagram.  At the publisher's website you can view interior images, including one of my favorites.  On September 20, 2018 Marsha Diane Arnold visited this blog as part of the tour for this title.  Her excellent guest post is informative and insightful.
Posted by Xena's Mom at 3:01 PM