Nearly three quarters of an hour before sunset, it lifts from the opposite horizon.  Like a luminescent globe it shimmers through the branches of the evergreen trees.  It looks enormous.  It is breathtaking. 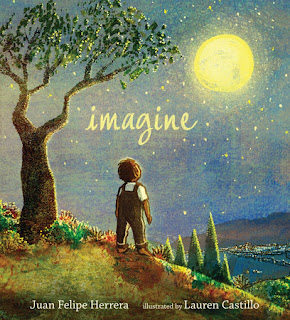 When the air is crisp and clear and there is no wind, the moonrise, two days before it's full, beckons to you.  You pause and not for the first time (and hopefully not for the last time) start to think of all the individual beings who are seeing this same moon at the same time.  You wonder what they are thinking and doing.  imagine (Candlewick Press, September 25, 2018) written by U. S. Poet Laureate (2015-2017) Juan Felipe Herrera with illustrations by Caldecott Honor Book winner (Nana in the City) Lauren Castillo is a poetic reflection on Juan Felipe Herrera's memories.  His words and the artwork of Lauren Castillo will send your spirit soaring.

We shadow this child through words as he wanders in a garden or plays along a creek.  As he watches and waves to friends, we ride with him in the back of his father's truck.  Beneath stars and among shadows we sleep with him outside.

When he helps his mother with their poultry, walks to another village to bring back a bucket of water, or goes to school in a new community, we are there with this child.  Slowing, patiently with practice, he learns another language; Spanish to English and English to Spanish.  As a wordsmith in the making this boy gathers pens and uses language to write stories.

We applaud his bravery in singing before a class in this school.  We cheer as he pens poems walking home from school.  We are grateful as he turns poems into songs.  We feel his joy when his treasured poems and songs become a book.

He begins, as a child, to turn each moment into a sensory experience.  He tucks memories away to savor later.  He follows his dreams working them into a wondrous reality.

Each of the sixteen verses in this autobiographical poem by Juan Felipe Herrera plucks on the strings of our collective hearts.  Each word in those verses supplies us with the sensations he experiences.  He invites us to travel with him on this remarkable journey allowing us to share in his many accomplishments.  By beginning the verses with "if" and ending them with "imagine" a soothing melody sings in our minds.   Here is another verse.

If I let the stars
at night
paint my blanket with milky light
with shapes of hungry birds
while I
slept outside,

imagine what you could do.

It is my deepest desire all readers can identify with the image on the front, right, of the opened dust jacket.  Month after month a full moon shines upon us as it does on the child.  It's as if it casts a spell on us, opening our minds to possibilities, now and in the future.  This scene is peaceful and brimming with potential.  To the left, on the back, an older boy takes his pen collection and writes word after word on a river of pieces of paper.

A deep midnight blue is the background on the front and back of the book case.  It is sprinkled with gold foil stars.  The title word, also in gold foil, is placed in the middle on the front.  A burnt orange, a rusty shade, covers the opening and closing endpapers.  This hue is used throughout the book.

Rendered in pen and foam monoprint by Lauren Castillo the illustrations interpret and heighten the lyrical narrative.  Each of them is a double-page picture.  There is tenderness in the details; the delicate chamomile flowers, lily pads floating in a creek, birds soaring over a valley at night, and a child walking down a dirt road alone to bring water home.

Lauren shifts the point of view to accentuate the pacing.  Sometimes we are kneeling with him as tadpoles squiggle around hands, or lying on a blanket on a hill at night overlooking a small community or walking into a new town with buildings spread before us as we move, much smaller, toward the school.  The use of golden yellow draws our attention to flower centers, lilies, outlines of flowers and trees in a neighbor's yard, moonlight glowing on objects below, an evening walk for water, or the acceptance of a highest honor.

One of my many, many favorite illustrations is the nighttime scene of Juan sleeping outside.  Several shades of blue in the sky seem to pulsate with swirls of light, left to right and right to left.  The full moon on the right hangs over dark mountains in the distance, providing a backdrop for the community.  Trees grow on the nearer hills on the right.  Night birds numbering five glide from right to left.  On the left, on a hill closest to us, the boy is stretched on a blanket, knees bent and resting his head in his hands. The left edge is framed with a large tree extending off the top of the page.  Everything is dotted with golden yellow as if kissed by moon beams.

Whether silently alone or aloud with a group, the first time imagine written by Juan Felipe Herrera with illustrations by Lauren Castillo is read not a word will be spoken when it's finished.  This silence will be followed by sighs and a huge gasp of appreciation for the splendor these words and images create.  Certain to inspire others but most importantly a title to love, this book should be on all professional and personal bookshelves.

To learn more about Juan Felipe Herrera please follow the link attached to his name to access information about him and his work at poets.org.  To discover more about Lauren Castillo and her other work, please go to her website by following the link attached to her name.  Scholastic's Ambassador of School Libraries, John Schumacher, chats with Juan and Lauren at the reveal of the book's cover on his blog, Watch. Connect. Read.  Both Juan and Lauren have accounts on Twitter.  You can find Lauren on Instagram.  You can view interior illustrations at publisher's websites here and here.
Posted by Xena's Mom at 9:32 PM