Hats keep us warm by trapping our body heat.  They can also protect our faces from sun and wind.  Hats can make a fashion statement. They can proclaim our loyalty to a particular sport team or cause in which we believe.  They can be a reminder of a momentous event bearing the autograph of a person we admire. 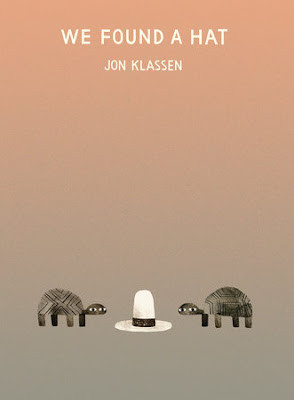 PART ONE
Finding
the
Hat

We found a hat.
We found it together.

Two turtles have indeed found a hat.  They are both complimentary about how the hat looks on each other. The dilemma of one hat and two turtles is a tricky equation with no set answer.

One of the turtles suggests they leave it where they found it.  His companion agrees...reluctantly.  In part two they are enjoying watching the sunset from a rocky perch. This they are doing together in quiet companionship.  They are both thinking about something different; one is focusing on the beauty in the sky, the other says he is thinking about nothing but we readers know better.

As the two terrapins chat and settle in for the night, one keeps asking the other about his state of being asleep.  His pal replies he is fully asleep and dreaming.  Why does the one turtle want to know if the other is asleep?  What dreams fill the mind of the second turtle?  This third part with its marvelous conclusion will have you wondering about kindness, cleverness and truth.


One of the first things readers can appreciate about this narrative is the dividing of it into three parts.  None of us approaches a problem and solves it in one single moment unless it is sheer survival.  We contemplate.  We deliberate. We wait, listen and evaluate.  Jon Klassen's simple sentences are succinct and powerful.  They read well for readers of all ages.  Here are two of his sentences.

But there is only one hat.
And there are two of us.


Readers of Jon Klassen's hat titles are familiar with his limited color palette drawing our attention specifically to his characters.  The two turtles on the front looking at the hat is a definite departure.  To the left, on the back is the hat near desert grass.  On the opening and closing endpapers is a black background studded with white dots; a starry night sky.  On the title page more desert flora frames a single rock placed beneath the text.

Rendered digitally with powdered graphite the images vary in size from single to double page.  Each part heading has a cactus on the right and the hat on the left, alone in the desert.  The text is always placed on white on a single page or along the top of multiple pages.

The two turtles are distinguished by the markings on their shells; a square-shaped design on the one and a series of arrow lines pointing to the middle of the shell on the other.  It's wonderful how much emotion Klassen can convey with the eyes on his turtles, the direction they look and whether they are awake or asleep.  There is subtle humor in the situations he creates when they are trying on the hats or when one is thinking about something he does not want the other one to know.

One of my favorite illustrations is in the early evening.  The turtles are on a rock overlooking the area where the hat rests.  Their heads are facing in the same direction.  All you see is their shells, heads and eyes.  The one is sleepier than the other.  In this picture readers can appreciate how Klassen changes his backgrounds to differentiate between day, sunset and night.


We Found A Hat written and illustrated by Jon Klassen is a stellar conclusion to this series.  I literally stood in the middle of the children's section in a book store hugging it after I read it the first time. Even after multiple readings I still have the urge to give it a hug.

To learn more about Jon Klassen and his work, visit his Tumblr site.  Publishers Weekly has a post about this final book.  The cover reveal and an interview can be viewed at The Guardian.  There is a video and article about Jon Klassen's work at The Sydney Morning Herald.  At the publisher's website there is an activity kit, drawing sheets, and teacher's guide.  Jon Klassen was a guest on All The Wonders, Episode 296 hosted by teacher librarian Matthew Winner. Jon Klassen talks about all three books at PICTUREBOOK MAKERS.  Enjoy the book trailer.