Grab A Seat, The Curtain Is Rising

It's a miracle!  Every moment we are alive the systems of the human body work in unison striving for optimum performance.  No matter the size of their components, as tiny as capillaries or as large as a femur, each has an important role to play. 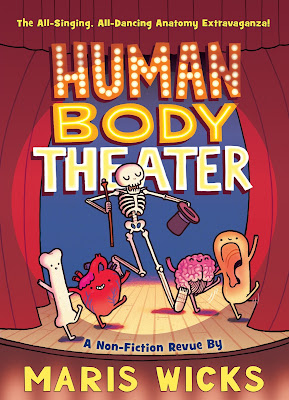 There is no ticket necessary to enjoy The All-Singing, All-Dancing Anatomy Extravaganza! Human Body Theater: A Nonfiction Revue (First Second, October 6, 2015) written and illustrated by Maris Wicks.  A Now Showing table of contents reads like a program. An introduction, eleven acts, one for each system and the five senses, and an intermission entertain and inform you about this marvelous structure in which we live.

As the lights dim a bony hand draws back the curtain.  Our master/mistress of ceremonies and guide, a skeleton, first showcases the stagehands, cells.  One particularly nice member of the team, Golgi Bodies, continues with insights on molecules and atoms.  Appropriately Act One features The Skeletal System.  We examine the outside of bones as well as the inside.  We get the scoop on broken bones, repairing bones, maintaining healthy bones and how bones are held together.

Did you know we have more than 640 skeletal muscles?  The strongest one has the force of twenty bowling balls coming down at one time.  Now I know why parents are always saying "Get your fingers out of your mouth!"  Act Two, The Muscular System, closes with a launch into the delivery of oxygen.

One of the most interesting pieces of information shared in Act Three, The Respiratory System, was the source of most of the oxygen we breath.  It's not trees, readers.  You will have to think bigger and...wetter.

Our blood transports this oxygen, among other treasures throughout our body.  Act Four, The Circulatory System, focuses on blood's composition, red blood cells, white blood cells and platelets.  You will not believe how many red blood cells are in a single drop of blood.  We learn about blood pressure, blood types, and how blood heals wounds.

Taking center stage for Act Five, The Digestive System, the skeleton gleefully swings guts around and carefully places them back in position before telling us how to determine the length of time it takes for our food to be digested.  I don't think I'll ever look at corn quite the same way in the future or a peanut butter and banana sandwich.  Enzymes, salts, minerals and vitamins take the stage.  I know you'll be scurrying to get a glass of water as the curtain closes.

After gulping down a glass or two Act Six, The Excretory System, offers an informative explanation on why you'll be glad Intermission is coming up next.  Viewing hormones as messengers makes perfect sense in Act Seven, The Endocrine System.  This has our gangling guide jumping for joy as the spotlight shines on Act Eight, The Reproductive System.  This act simply steals the show with finesse, facts and fun.

From every area of our body warriors run ready to fight when germs threaten us.  Act Nine, The Immune System, will have you cheering for the efforts of mucus, tears and saliva.  You'll swell with pride at the efficiency of white blood cells, neutrophils and antibodies.  Bacteria, viruses, fungi and allergens play their parts well.

Our brain governs all actions, involuntary and conscience thought.  In the Nervous System, Act Ten, a fascinating network needing as much care as the other systems in our body is revealed.  It's the conductor for the orchestra of everything.  Each of the five senses, Smell, Taste, Hearing, Sight, and Touch, Act Eleven, help to keep us alive.  They are uniquely designed to function in a capacity to warn us or create a delightful sensation.

Words full of vitality by Maris Wicks captivate her audience.  We are aware of learning and loving every minute of it.  The conversational interplay between the characters is as real as two neighbors chatting over a fence or classmates comfortable sharing the latest news in the hallway at school.  Humor abounds in every act especially through the voice of the master of ceremonies; act titles will cause a chuckle or two.  In addition to thorough discussions on each system, Wicks speaks thoughtfully about the care and upkeep of each.

Bright, cheerful full color panels with loads of rich red shades draw readers' eyes to the pages.  Maris Wicks uses white space artfully as an element to highlight a specific item.  We are given an overview of each system and numerous fascinating close-up sections.  The animated features, physical characteristics and body movements on the skeleton host and the other lively players are deftly drawn.

Be sure to follow the links attached to Maris Wicks' names to access her blog and Tumblr sites to learn more about her and her work.  This link to the publisher's site will give you a view of eight interior pages.  Gina Gagliano of First Second celebrates this title on their blog with many images.


I am thrilled to be the final host on the blog tour for this stunning nonfiction graphic novel, the first both written by and illustrated by Maris Wicks.

Welcome to the Human Body Theater, where your master of ceremonies is going to lead you through a theatrical revue of each and every biological system of the human body!  Starting out as a skeleton, the MC puts on a new layer of her costume (her body) with each "act."  By turns goofy and intensely informative, the Human Body Theater is always accessible and always entertaining.


I'll bet you've never stopped to think how you would do all the things you do without the use of your elbow. 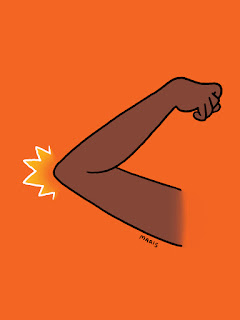 In your arm, there is a bony intersection where your humerus and ulna meet (ok, and the radius hangs out there too): the ELBOW! The elbow is a joint - a place where two bones meet - and this particular one is called a hinge joint (like hinges on a door). If you touch the pointiest part of your elbow, that’s the very end of your ulna (one of the two bones in your lower arm), but if you feel your elbow as it bends, you can actually feel the ulna glide over the humerus. Joints all over our bodies allow us to bend and twist, and each joint is cushioned by a piece of squishy cartilage. So, tell your arm to bend and take a (el)bow for all the work that it does!

Maris Wicks lives in Somerville, Massachusetts. She has harnessed the power of her various biological systems to draw comics for Adhouse Books, Tugboat Press, and Spongebob Comics, and written stories for Image and DC Comics. Wicks is the illustrator of the New York Timesbestselling Primates, with Jim Ottaviani. When she's not making comics, Wicks works with New England Aquarium. She's especially proud of her pulmonary system. 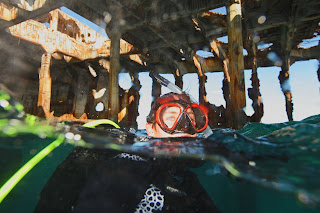 Be sure to visit other hosts on this tour.