Anyone with an ounce of sense will tell you it's ridiculous.  You think it's ridiculous.  There are certain books though, books you have finished reading, which cause you to look at inanimate objects with a different mindset and a more cautious approach.  The line between fiction and maybe-it-could-be-real tends to blur in these stories. 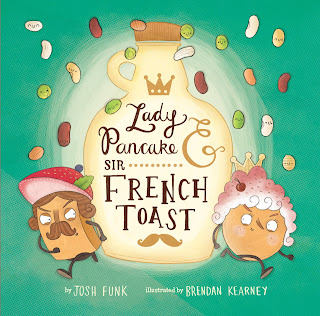 Long after the cover is closed there's a teeny, tiny voice in your mind whispering words, reminding you.  Lady Pancake & Sir French Toast (Sterling Children's Books, September 1, 2015) written by Josh Funk with illustrations by Brendan Kearney will have you wondering about those odd noises you hear your refrigerator make after all the lights are out.  Even in the middle of the day upon opening the door, your eyes will scan the shelves wondering if something (someone) has moved.

Deep in the fridge and behind the green peas,
way past the tofu and left of the cheese,
up in the corner, and back by a roast,
sat Lady Pancake beside Sir French Toast.

Within seconds of hearing the news, the two best friends become rivals in a race.  There is only one drop, a single sweet taste, of maple syrup left.  They both want it. (cue Chariots of Fire).

Food becomes a forest, a fountain and a mountain to navigate at an ever-increasing speed.  They strive to be first abandoning caution.  One nearly falls off a ledge; the other does plunging into a jar of jam.

Nimble Lady Pancake rappels with ease using pasta and leaps over veggies and a fruit like a champion hurdler. Surpassing the skill and style of medal-winning Alpine skiers Sir French Toast swiftly glides from a summit of sauerkraut.  There's a thump!  Then someone else is mired in a spicy mix of mud.

Ignoring the plea of a chickpea starts an icebox disaster.  A ladder provides safety and leverage.  A parachute supplies a heightened view.  The duo, looking the worse for wear and feeling it too, trudge toward their goal.  Finally standing side by side with the bottle reached, they are stunned.  Evil lurks when you have your eyes on the wrong prize.


If there were a contest for rhyming with rhythm, Josh Funk would walk home with the blue ribbon.  Not only do his characters run, romp and roam through the confines of a household appliance with rambunctious remarks but his words leap off the pages and linger in our collective minds.  Each has been chosen with care entertaining us and asking us to look at our food as a landscape of possibilities. Here is another passage.

Pancake made use of her seafaring skills
and sailed across oceans of soup, causing spills.


When you open the dust jacket and run your hands over the front and back you will notice the heavy textured paper.  On the front, on and around the jar, the elements are raised.  The crown, dots, ampersand and moustache are in copper foil.  Lady Pancake and Sir French Toast are off and running with a smile and a glint in their eyes.  On the back readers are treated to the reverse of the front, the jar, beans and the two main characters.  A third party lurks off to the left, foreshadowing an unexpected future.

On the opening and closing endpapers Brendan Kearney, in two shades of green, has sketched in outlines all varieties of food.  The textual design from the front of the dust jacket and book case is repeated on the title page.  In full color, animated food is placed beneath it.

Rendered in pencils and digital media the illustrations span across two pages or single pages.  Kearny keeps us close to the action using color, shading, and circular framing.  Prominent characters including Lady Pancake and Sir French Toast are boldly depicted many times against outlines of food stuff in the background.  Tiny dots, lines and curves portray an array of emotions on the other food.  At the close of the story two brilliantly hued images will delight readers as will the special fold-out.

One of my favorite illustrations is of Lady Pancake.  She is sailing in the soup.  An appetizer pick with a tiny flag on top is her mast.  Swiss cheese is her sail.  It looks like she is standing on a bow of bratwurst.  At the moment her gaze is triumphant.

Are you introducing a unit on food?  Are you hosting an overnight party, needing a book for breakfast?  Are you teaching a writing unit on rhyme?  Are you looking for a fun food fight without the mess?  Lady Pancake & Sir French Toast written by Josh Funk with illustrations by Brendan Kearney is exactly the book you need.  Readers and listeners will be cheering for their favorite but realize, as the pals do, most things are not worth the loss of friendship.

To discover more about Josh Funk and Brendan Kearney please follow the links attached to their names to access their respective websites.  Josh Funk maintains a blog.  Brendan Kearney's blog is older but has some great illustrations there.  I was fortunate enough to interview both Josh Funk and Brendan Kearney when their cover was revealed.  John Schumacher, Scholastic Ambassador for School Libraries and blogger at Watch. Connect. Read. premiered the book trailer.  If you go to Josh Funk's page for this title he has a complete list of all articles, interviews, blog posts and podcasts relative to this book.