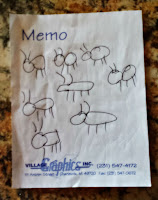 Every single day is filled with surprises in all sizes.  There is the kindness of complete strangers helping you to reach something high on a shelf in the grocery store or allowing you to merge in traffic.  A typical visit to the car wash can turn into a humorous moment long remembered.  Handing the attendant a twenty dollar bill, I ask for eight bucks back.  Instead of reaching in his pocket for change, he disappears for a lengthy bit of time.  When he returns he hands me this note. 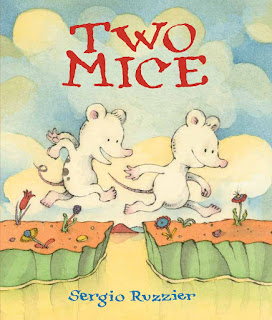 A sudden hug from a grateful student will last long beyond the day in which it is given.  A worst case scenario can reveal unknown benefits.  Sometimes you have to look long and hard but they are there.  In his newest title for younger readers, Two Mice ( Clarion Books, an imprint of Houghton Mifflin Harcourt, September 1, 2015) Sergio Ruzzier presents us with a series of challenges faced by utterly charming characters.

In this single little home one mouse with brown spots wakes up looking over at its sleeping companion.  In the next scenario there are three cookies, two glasses of milk, and a single red pitcher sitting on the kitchen table.  The first mouse is happily munching on two cookies.  Hands on hips, the second mouse is grumpily staring at the remaining cookie.

In what will be a turn of events the duo set out to explore, finding three boats and two oars.  This time

works to move them across the water.  It is the mouse who greedily consumed the two cookies.  The white mouse is lounging with eyes closed in the stern.

As they coast toward shore numbers one and two promise them a delicious treat but three gives them not one but two shocks.  Our friends find themselves in troubled waters.  An island with trees promises them relief but OH! NO!

Now airborne their misfortune is tripled.  With sinking hearts they look upon... a clever change of events.  HOORAY!  Hand in hand the two mice walk as readers count one...two...three and three...two...one.  There's plenty for both at day's end.


With warmth and wit Sergio Ruzzier blends counting from one to three and three to one not once but four times into a timeless tale of short-lived misadventure, startling discoveries and enduring friendship.  We move merrily from hope to discouragement and back again as Ruzzier demonstrates his gifted use of language.  Groups of three two-word phrases are punctuated with periods, a question mark and an exclamation point to provide readers with emotional impact and a cadence carried throughout the story.


When you hold a book by Sergio Ruzzier in your hands the signature style of his illustrations and unique color palette are a welcoming invitation to open the cover and let your mind soar.  Seeing those two mice gleefully running across a Ruzzier landscape on a sunny day with soft clouds in the sky makes you want to join in the fun.  The use of red in the title text and along the spine offers further encouragement.  On the back of the matching dust jacket and book case, to the left, on a background of blue are the three cookies with a bite missing from one and two glasses of milk.  A shade of salmon (daybreak) colors the opening endpapers and a deeper blue (early evening) covers the closing endpapers.

A page turn shows the house with smoke rising from the chimney and the first two words of the story.  The title page follows but also continues the tale.  Mint green walls and a hexagonal, floral pattern in tiles on the floor form a room for the mice's two iron beds.  I love seeing a book peeking out from beneath one of the beds.

All of the images span across two pages except for the final one.  Using pen and ink and watercolors Ruzzier supplies mood and movement with his tiny details, fine lines, brush strokes, shading, facial expressions and body movement.  His pictures alone reveal every facet of the narrative.

One of several favorite illustrations is for the text

The mice are near the land eager to be out of the water.  Both, even though they are wet and have lost their transportation, are wearing big smiles.  Careful readers will see what they cannot see.  The two trees have claws at their root bases.  These are no ordinary trees.  Anticipation is already building as the page is turned.


Small in size, perfect for the hands of his intended audience, Two Mice written and illustrated by Sergio Ruzzier is a tiny treasure waiting to be found over and over by readers.  And believe me, you will be asked to read it repeatedly, counting but also following these two best buddies in and out of their difficulties.  It is simply enchanting.

To learn more about Sergio Ruzzier and this title please follow the links attached to his name to access his website and one of several special pages for this title.  In a link to the starred Horn Book review Ruzzier answers questions about the trim size for this title.  In a wonderful interview at Julie Danielson's Seven Impossible Things Before Breakfast Sergio Ruzzier talks about this book sharing the process and artwork.  Update: November 6, 2015 Sergio Ruzzier writes a guest post at Elizabeth O. Dulemba about his process.  He includes lots of sketches.
Posted by Xena's Mom at 1:21 AM